You are sending a message to
Dr. Khushnuma
Go back

"In just a few weeks, my baby's cancer has spread so quickly. Without timely treatment, she might not make it. It seemed like only yesterday that she was her happy and playful self. Now, she cries in pain all day long. Every day we wake up to the cruel reminder that our baby is running out of time."

One month ago, 1-year-old Aaditri’s life completely changed. Instead of playing with her toys and being in the warmth and comfort of her home, she’s confined to the walls of a hospital, fighting to survive blood cancer. Aaditri’s cancer is aggressive and will spread rapidly if she doesn’t get treatment. Only chemotherapy can save her now, but her father, Nayan, is struggling to find the means.


Kavita, Aaditri and Nayan, in the hospital

Less than 2 weeks ago, in February, Aaditri’s bags under her eyes started swelling up and she started developing black spots on her head and throughout her back. After performing blood tests back home in Guwahati, Nayan was crushed when he found out that his 1-year-old daughter has Acute Lymphoblastic Leukemia (A.L.L.).

A.L.L. is a type of blood cancer that spreads rapidly and if untreated, it can prove to be fatal very quickly. To get her the best treatment possible, Nayan decided to get her to Mumbai.


“Aaditri loves to listen to songs and dance. Now, she’s so weak, she doesn’t feel like walking too. She gets frustrated easily and cries a lot. She is so weak but I just want to her to get better, I will do anything and everything for her.” - Nayan

Chemotherapy can save Aaditri's life, but it's way out of Nayan's reach

After coming to Mumbai on 28th February, Aaditri’s condition had worsened and she is now, very critical. Nayan and his wife, Kavita, received yet another blow when they found out that to survive, their baby would not only need intensive chemotherapy for the next 6 months but also other treatments for the next 2 and a half years.

“As her father, I can’t describe what I’m going through. I had so many dreams of the things I wanted to make her do, but it feels like all of them have been snatched away. It really is heart-breaking and I feel that it’s unfair to her but I have to remain strong for my wife and Aaditri.”

Nayan and his family are struggling to survive in Mumbai

This is perhaps the first time Nayan and his family have stepped out of the state of Assam. Not only are they extremely vulnerable because of Aaditri’s condition but to complete her treatment they would need to stay in Mumbai for a minimum of 6 months.

“I never thought that I’d ever come to Mumbai. Now, Aaditri needs to undergo treatment here for 6 months and we have no idea where we’re going to stay. Some people told me that it costs around Rs. 20,000 per month for a room but that is so expensive. Other than providing for her treatment and medicines, I also need to worry about rent and food. Mumbai is just so expensive and we don’t even know anybody here. I don’t have the required money for the treatment alone.”

Nayan and Kavita are in dire need of help

In Guwahati, Nayan works as an Uber driver where he earns around Rs. 5,000 per month. While he’s still worried about the large sum of money, he doesn’t really have anyone he can ask. His relatives are helping him but combined, they’re still nowhere close to the amount Nayan needs to give his baby the life-saving treatments.


The total cost of 6 months of intensive chemotherapy and 2 and a half years of treatments is estimated to be around Rs. 15 lakhs, which is way beyond what Nayan and his family can afford.

“We had a small piece of land, which I sold before coming to Mumbai. That’s just a small fraction of the cost. Now, God only knows what will happen because I need to stay here (Mumbai) for the next 6 months minimum and provide for her treatment and worry about putting a roof over our heads.”

Aaditri needs chemotherapy for the next 6 months to beat blood cancer. Time is ticking and every day is a struggle for Nayan to find the means to save his baby. Without treatment, Aaditri's cancer will spread rapidly. Only chemotherapy can save her now, but Nayan has no one to turn to for help. He's desperately looking for support to save his baby girl.

Your support can save Aaditri's life. 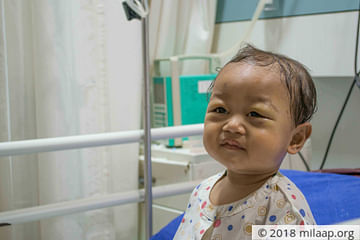 Aaditri is critical and suffering from blood cancer. Only chemotherapy can save her life.