The bright rays of the scorching sun stung my eyes. It had been more than an hour since I had left from Bhachau by bus. I couldn’t help but heave a sigh of relief upon finally reaching Gandhidham, my second destination that day, to meet the borrower groups in the district of Kutch, Gujarat, in western India.

I was here in this branch of Kutch in order to check on the progress of Chamunda Mahila Mandal: a group being led by Nanuben, after they had borrowed a loan of Rs. 75,000 in order to develop their respective enterprises.

Nanuben, a 39-year-old woman has been running a provisional store for ten long years now. With her loan from Milaap a couple of months before, she was able to buy a lot of stock in bulk. She clearly stated that the loan had impacted her life in a much bigger way than she had hoped at the time of applying for the loan. Not only did it increase her monthly income, but now, she is simultaneously able to save money for her son’s marriage; weddings are an expensive affair, and in rural India, it’s still the parents who bear the cost.

Nanuben now earns a sum of Rs. 8000-10,000 on a monthly basis, a 35% increase over her earlier earnings. Two of her sons are rickshaw drivers. And her third son assists her in running the store. She, with a smile, expressed thanks for the change that the loan had brought in her as well as her family’s life. This change in Nanuben’s life has only been possible due to the support from Milaap community of lenders. And she, with all her heart, is grateful for it. 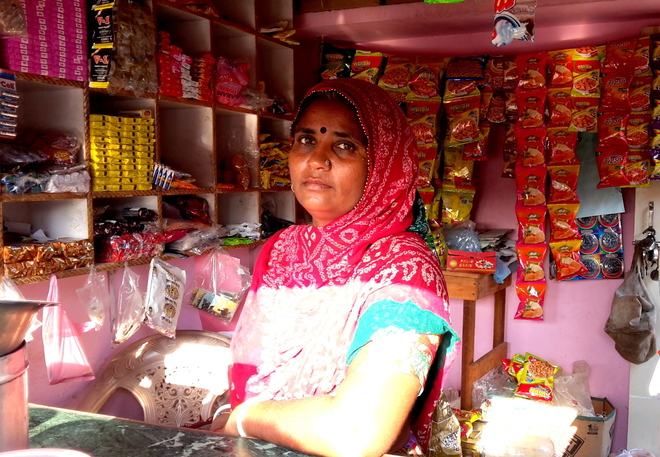 Nanuben at her provisional store