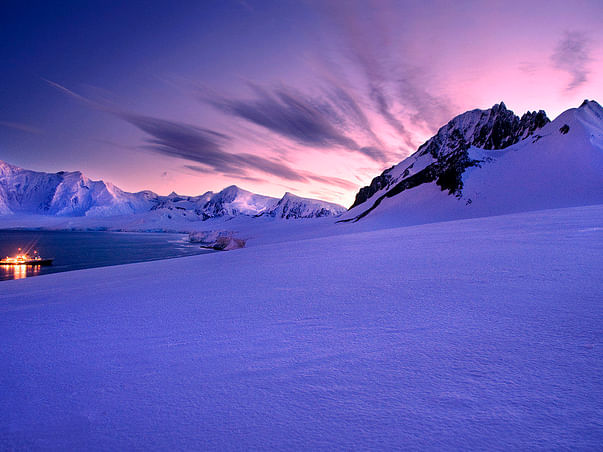 Share
Antarctica - Saving PresenTENSE
My journey back from the last wilderness on planet Earth
I’m sorry, I’m sorry....
My deepest apologies to the kids of the next generation and to the unborn generation; some day you will be crossing a man made structure that people would call a bridge and you will for sure ask around as to why is there a bridge over just pits of sand? Where has all the water gone would be your next question? Sadly, we all including myself have brought our world to this pathetic state. Even with all the water gone, we still did not stop there; we dug up all the sand and transported a million truck loads of it to build ourselves “homes” for our luxurious survival.
I’m sorry... you might never know how it feels to dive into a river or a fresh water lake; our greedy souls have consumed all of it and polluted the remaining. You might never see the colours of a reef under the sea, it is already bleached white. Except for one male and four female White Rhinos on this planet, we killed over 2000 of them in less than 25 years for the rich to snort their powdered horns. Right now, they are being guarded 24/7 by human beings from other “human beings”; I can only hope for their survival.  I could go on and fill up hundreds of pages on things we’ve done wrong especially in the last century, yet it’s not going to change anything. Our only hopes lie in the hands of a few leaders that are fighting against the system to extend our survival on planet Earth. I would like to help those leaders through every possible way during my time on Earth. We can no longer be keyboard warriors and leave climate change problems to experts; we have gone past all of that.
It has been more than a decade since I first saw the famous documentary, “An inconvenient truth” by Al Gore which documented the damage we have caused to our planet over the last century through our “movement forward” as human beings. Yet 10 years later in 2017, we haven’t made any progress in reducing our carbon footprint. Last year in October, there was yet another factual documentary by NatGeo, “Before the flood” that had facts from all over the globe stating that we are doing everything wrong for our luxurious survival. Have we changed?
I started to make conscious efforts to reduce my personal carbon footprint; it was the only thing I could do to start. My close interaction with the agriculture sector gave me more ground to implement ideas and solutions to work in tandem with the ecosystem while implementing commercial ideas. I had an audience to start with through a Farmers Producers company that we had established. I felt the need to gain perspective on climate change and the environment. I needed an opportunity that would distinctly give me authority and leadership to speak about climate change and the implementation of ideas. I came across Sir Robert Swan’s work and applied for the “Leadership on the Edge” program that selects 100 young leaders from all over the world to embark on an expedition to Antarctica. A few days later, I received a reply from the man himself inviting me to come on board the expedition to the last wilderness on planet Earth- Antarctica. I am running short of time and funds, so I am reaching out to all of you to spread the word and crowd fund about 38% of my entire budget which translates to INR 3,80,000 or USD 5,580 to help me with the expedition. Please read on to know who I am, what am I doing to help sustain Earth and how you can help me along my long journey. My humble apologies if it is too long a read...

Who am I and what is this all about?
My name is Walter Clint Fernando; I was born and raised in the second most populated place on earth, India (Chennai). I am an entrepreneur by profession, commerce graduate from Loyola, Chennai, India and also with a Masters degree in International Business and Trade from the University Of Adelaide, Australia. I had a brief stint in the financial capital of India, Mumbai in the same industry. Since college, I have spent a lot of my time and money (most of it) on travelling on my motorcycle, backpacking and being outdoors. This gave me a whole different perspective towards respecting and living in harmony with the world around. Post my Masters in Australia, I was convinced that India was the place to be. So I moved back to Chennai, got my ideas into perspective and ventured to set up my own enterprise - Winwal International in the Agribusiness space. One side of my business deals with the exports of agricultural commodities, mainly rice and spices. The other vertical deals with agriculture, urban farms, setup of a Farmers Producers Company and a vertically integrated supply chain directly off farms to retail stores for fresh horticulture produce which benefits the farmers with fair trade pricing. While working with a combination of the oldest professions in the world, farming and trade it gave me a deeper understanding of the fundamentals of our transformation, and the most vital problem that could and would cease our very existence - climate change. At this point, I began to realize that I have an audience of people from both urban and rural areas that I could change and influence through my farm projects and business, but I lacked the credentials and experience in the climate front.

The company 2041 was founded by polar explorer, environmental leader and public speaker Robert Swan, OBE. As the first person in history to walk to both the North and South Poles, Swan has dedicated his life to the preservation of Antarctica by the promotion of recycling, renewable energy and sustainability to combat the effects of climate change.
Swan has served as Special Envoy to the UNESCO Director General and as a UN Goodwill Ambassador for Youth. In recognition of his work, Her Majesty the Queen awarded him the high distinction of OBE, Officer of the Order of the British Empire and the Polar Medal. 2041’s mission is to build on Swan’s dedication by informing, engaging and inspiring the next generation of leaders to take responsibility, be sustainable, and know that now is the time for action in policy development, sustainable business generation and future technologies.
Why Antarctica?
Why go all the way to Antarctica when we already have huge climate issues on our mainland? Antarctica is the only place on earth that isn’t open for commercial activities; a treaty for 50 years signed in December 1991 has designated “the continent of Antarctica as a natural reserve, devoted to peace and science”. The treaty prohibits all activities relating to the exploitation of mineral resources, fishing and other commercial activities except for scientific research. The current moratorium that bans drilling and mining in Antarctica can be reviewed after the 50-year anniversary of the ratification, which will occur in 2041. Since 2003, the leadership program of 2041 has been creating climate change ambassadors who would be the future decision makers and leaders to keep the Antarctic treaty intact in the year 2041.
Why am I reaching out to all of you?
The expedition aims to get more people, organizations and companies involved in the biggest problem we face today. Being a self funded expedition, I have not been able to secure the estimated budget through the CSR funds of corporate companies that I hoped would back me on this expedition. I currently have one company sponsoring me which is work in progress at the moment. I am running out of time as the deadlines for booking airfares, visas, equipment and gear are right around the corner. I have precisely 3 weeks to pull this off as I have to leave by the 1st of March, 2017. My entire budget and expenditure split up is detailed below. I have already put in INR 1,70,000 or USD 2500 towards the initial payments. I am looking to crowd source INR 3,80,000 or USD 5575 to make the necessary arrangements to embark on this once in a life time opportunity.

Why am I laying emphasis on this expedition and my way forward?
In the last two years I got to spend a lot of time in learning and understanding the agricultural and farming business in India. Being closely associated with the land, I got to witness the drastic changes in the weather patterns and how rise in temperature has huge downside on yield patterns across different regions. Alongside my entrepreneurial path, I started to address specific concerns - first was to reduce post harvest damage of food by employing standard packaging process; helping farmers break market barriers through a farmers producers company and linking retail to the farms (work in progress). My next plans include efficient usage of water at farm level, incorporating solar energy into the farming sector and a few small scale urban farm projects to make city folks connect back with nature. We all need a wakeup call to start a movement. Chennai will witness the harshest summer in 2017 accompanied with huge shortage in water as the North East monsoons retreated with a 62% rain deficit; this is the highest deficit recorded since 1876 in contrast to floods that hit Chennai a year ago. I’ve come across drastic weather conditions in many parts of the world in 2016. There are so many ways that you and I as an individual can work towards climate change, the smallest change in reducing our carbon footprint in our everyday routine will have a butterfly effect towards the larger problems we have in front of us.
Let us join together and work towards this as the future depends on how we implement our innovative ideas to help sustain our planet. Since the start of my preparation for the expedition to Antarctica, I have always emphasized that my journey and objective does not end on my arrival at Antarctica, rather it starts on my journey back to the mainland where I would implement ideas and work as a catalyst towards keeping every bit of our ecosystem intact. Being a survivor on this planet and an able leader for the future generations, I promise to work with my full potential through my business endeavours to preserve and sustain life in all forms as prescribed by nature. If you do feel that I am worth giving a shot, please contribute towards my expedition, a small amount would go a long way for me on this journey.
To get updates on the expedition and my future projects please find follow me on,
https://www.facebook.com/Saving-Presentense-My-journey-back-from-Antarctica-1534842023197257/
To acknowledge your generous contributions, I will send out postcards (from Ushuaia), photo prints of the expedition, personalized souvenirs and finally a copy of the memoirs of the entire International Antarctic Expedition’s team.
Thank you all!
Walter Clint Fernando
+91 9176223719 / +91 9789577895
clintfernando@gmail.com
Chennai, India
“There is no question that climate change is happening; the only arguable point is what part humans are playing in it.”   -David Attenborough