Help Arun Fight Advanced Stage Skin Cancer | Milaap
This is a supporting campaign. Contributions made to this campaign will go towards the main campaign. 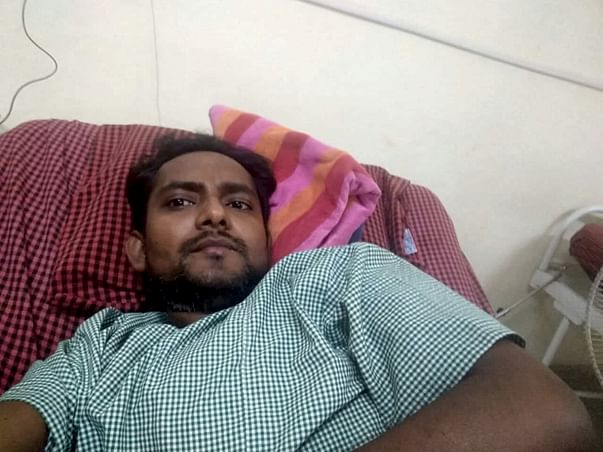 He could have perused his passion to become a professional player but due to a un-conducive atmosphere at family, he chose the noble profession of teaching. After his father expired untimely, he is the only earning member in the family of four- his mother and two dependent brothers. After teaching on ad-hoc basis for some time, he got selected as an assistant professor in a college. The happiness of this selection was still to sink-in while a small pimple-like lump inside his body was turning into a cancerous tumor.

Within the next few weeks, the small pimple- like mass has grown to a scary looking tumor. This tumor was to be removed by surgery. But before that, a biopsy was conducted. Little did he know that it will bring a very bad news. The biopsy report confirmed Malignant Melanoma, the most serious type of skin cancer. To add insult to injury, it was already in advanced stage...Melanoma is actually unusual and uncontrolled rapid growth of pigment cells. While melanoma is less common, it is very serious as it has a tendency to spread to other parts of the body. When it spreads to other places in your body, it's called metastatic, or advanced stage which is the case here with Arun.

It changed his life! He was rushed to TMCH (Tata Memorial Cancer Hospital), a premier institution in India for cancer treatment. He is still admitted there and after many rounds of consultation, he is advised to go under the knife for tumor removal and get Immunotherapy treatment. Immunotherapy also called biologic therapy, is a type of cancer treatment that boosts the body's natural defenses to fight cancer. This therapy is not only costly but takes a long time to complete. Kyetruda/Opdivo/Yervoy-some popular drugs used for immunotherapy cost 5-8 lakh for a single month's dose! However, it is very necessary to get this therapy now so that spread of cancer to other parts of the body can be avoided.

The cost of complete surgery plus treatment is around 20Lakh. After adding the cost of post-treatment medication the total cost is expected to exceed 25 Lakh. It is not that Arun did not save money. He had some savings but all have ended on initial rounds of diagnosis and surgery. So he is left with insufficient money to cover the cost of Cancer treatment. This is where your role comes in. Please contribute any amount you can. Even if you cannot donate, you are requested to share this campaign with people who can support Arun financially and morally.
Arun is a very optimistic person and by your support, I am sure he can emerge as champion after fighting cancer. So please help a champion to stay a champion. A Facebook page has also been created from where you can get in touch with him. Check fb.me/HelpArun

UPI: rzpy.givetomlparunvady003@hdfcbank (Copy to clipboard)
Or
Click here to read the instructions before you make a bank transfer. 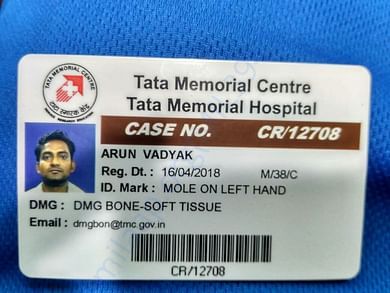 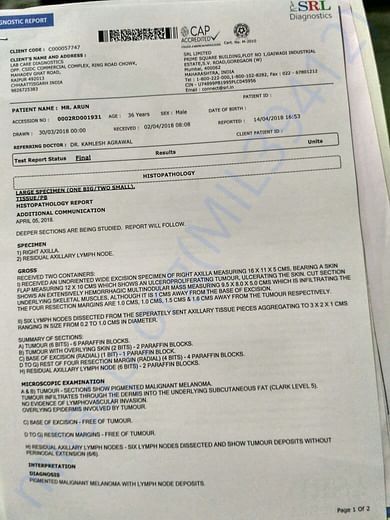 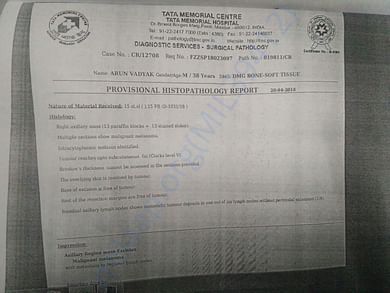 UPI: rzpy.givetomlparunvady003@hdfcbank (Copy to clipboard)
Or
Click here to read the instructions before you make a bank transfer.

Ask for an update
Donated to this campaign via Paytm or bank transfer? Click here if you have not received an email confirmation from Milaap.
It is with deep sadness and sorrow that I inform you that Arun could not survive cancer. Maybe he is more dear to The God than us. He is still a true champion for us as he fought with Cancer till his last breath with a smiling face.

Sunday, 23rd September became the black day for us when Arun left for the heaven. His last rites are still underway. We pray that his soul Rest in peace and his family gets the necessary support from all of us to overcome this unfortunate situation.
I am keeping the campaign still open so that his family can get some  amount required to complete his last rites

I am very grateful for the love and support being given to Arun.

I would like to inform you that his skin cancer has increased and has reached stage 4. The doctors have kept him under complete bed rest so that he can recover to a certain level, only after which the treatment can be started. He is unable to move and is in a critical condition.

Please keep praying for his health to improve and share the campaign. Thank you all for the love, support and prayers blessed on him.

Regards,
VidyaBhushan
Arun's condition is serious and he is presently admitted to Balco Medical Center, a new specialized hospital for cancer at Raipur.
Keep donating, as we need more funds in near future.
Also, keep praying for his speedy recovery.
Thanks
Load more
Donate

You are sending a message to
Vishwajeet Lal
Go back 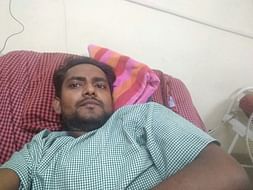