6-Year-old Motherless Child Needs Urgent Liver Transplant To Survive | Milaap
This is a supporting campaign. Contributions made to this campaign will go towards the main campaign. 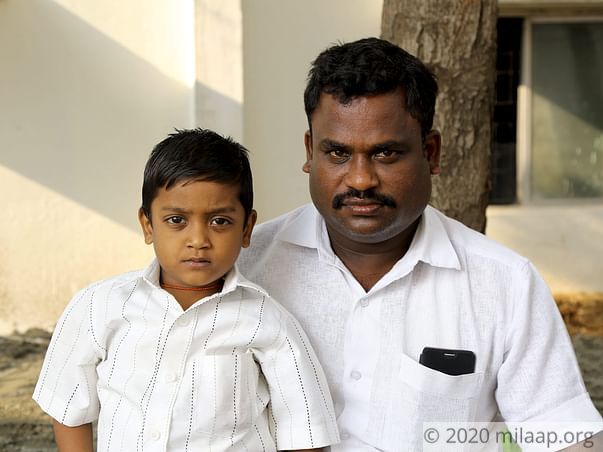 6-year-old Vetrimaran never had a normal life like other children his age. He suffered from breathlessness and painful swelling of his stomach since he was 1-year-old. He also had jaundice, due to which he could not play with other children. He falls short of breath within few minutes of running. His only companion was his mother, who took care of him and comforted him all the time. Unfortunately, his mother passed away suddenly due to an undiagnosed condition, leaving him shattered. He innocently prays to God every night to send his mother back to him. Sadly for the little boy, he has endured only pain in these last two years. Now, he's fighting for his life because of a deadly disease, and every time he gets painful injections, he cries for his mother. Only an urgent liver transplant can relieve the little boy from his pain.

Vetrimaran was healthy until he turned one year. Soon after his first birthday, he fell very sick and his stomach had an abnormal swelling. His father, Prabhu, took him to a local doctor in his village in Kanchipuram district. The doctors said that the swelling is due to jaundice and he was given medicines. Prabhu was hopeful that he would become better one day, but a month back his condition became very critical. He started throwing up even water and lost all his energy. He couldn't even stand on his own. It was then that his father took him to a hospital in Chennai and he was diagnosed with Hepatic fibrosis, an overly exuberant wound healing in which excessive connective tissue builds up in the liver. It occurs when the healthy tissue of the liver becomes scarred and therefore cannot work as well. Liver transplant is the only solution to save him from this dreadful disease.


"I was shocked when the doctors told that his liver has failed completely. I live in guilt every moment. I should have taken him to a better hospital earlier itself but I thought medicines would cure him. I'm scared to even touch his stomach. He thinks his stomach is swollen because of drinking a lot of water. He refuses to eat anything. When he feels hungry, he eats a little but he throws up the next moment. I can't bear to see him suffering so much." -Prabhu, Father.

Vetrimaran is the only child to his parents and they were very protective of him. He has never played outside with other children. He loves to listen to the stories that his mother used to tell him and remembers the name of all the characters in the stories. Unfortunately, his mother did not live to see him going to school. He studies in 1st grade but most of the days he has not been able to attend class because of extreme tiredness. After his mother's loss, it was his grandmother who filled her absence and she is also a matching donor for the transplant.


"I can't understand why he has to suffer so much at this age. Whenever he gets injections, he cries loud and asks for his mother. He hardly sleeps at night. Whenever he sees children of his age with their mother, he starts crying. With this pain and medicines he had become very irritable. He is begging us to take him back home. " - Saraswathi, Grandmother.

Vetrimaran's father, a poor farmer, cannot afford the life-saving transplant for his son

Vetrimaran's father Prabhu is a poor farmer. He has one acre of land but due to poor rainfall, he hardly earns any income.  He was emotionally shattered after his wife's death but he gathered all his strength and forced himself to stay strong for his son. He has been running to everyone he knows, borrowing money and taking loans but nothing seems to be enough. He needs 20 lakhs for the transplant which is beyond his means.

"All I have left in my life is my son, I can't imagine losing him. I feel guilty that I'm not able to do anything for him. I'm willing to do anything to save him, but I'm helpless. I don't even have the strength to look at him. I will never be able to forgive myself if I fail to save him." - Prabhu

6-year-old Vetrimaran, who lost his mother 2 years ago, is now fighting a dreadful liver disease. He needs an urgent liver transplant to survive. His grandmother is a matching donor but his poor father is left with nothing to save his only son. He is desperately waiting for help. This little boy, who has been suffering for years will lose his life without your support. 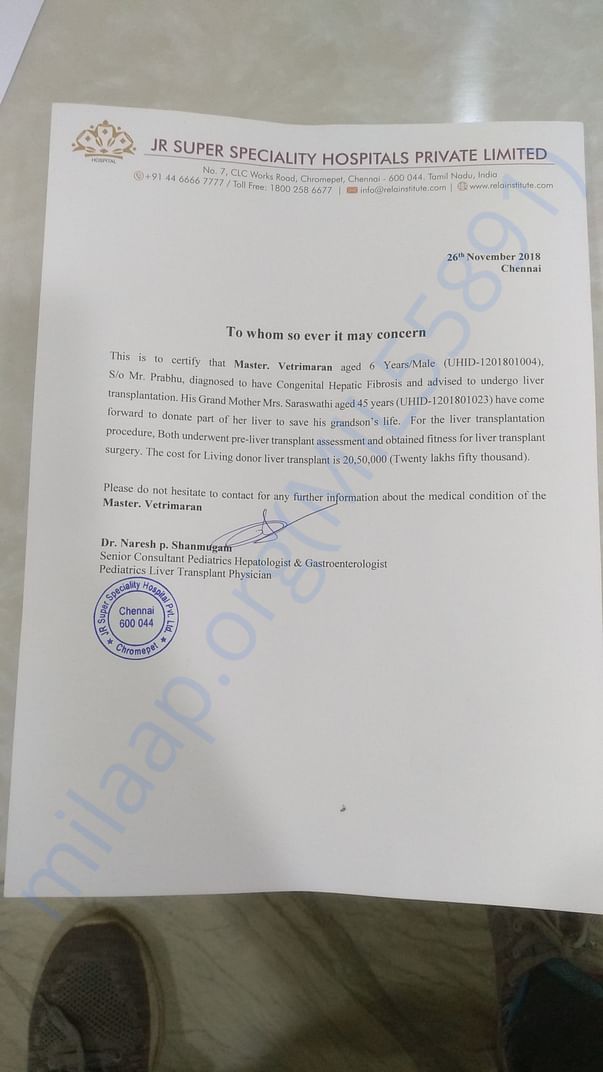 I thank you all for your humble love and support.

Vetrimaran is at home under medication. The doctors are hoping to conduct the liver transplant once the goal amount has been raised.

Please contribute and share the campaign so that my son can undergo the transplant soon.

It is overwhelming to receive such immense love and support for my son.

Vetrimaran is presently at home under medication and is doing well. The doctors are hoping to conduct the liver transplant next week. His grandmother will be the donor for the same and  she has also undergone all the donor tests.

Keep supporting and pray for his good health. A heartfelt thank you to all. Will keep you posted. 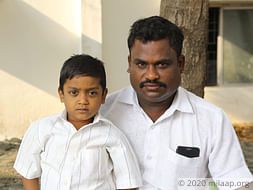