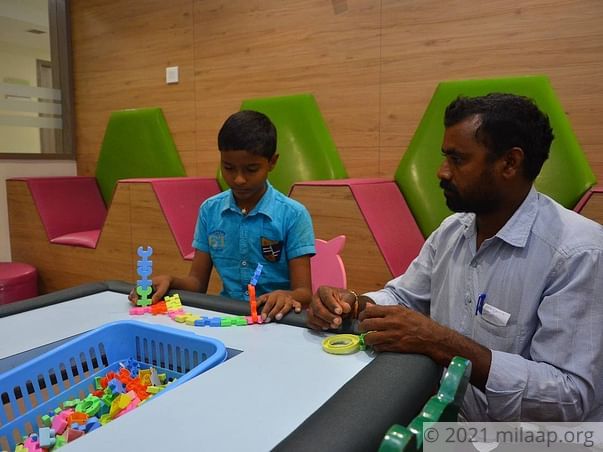 “When he was born, the doctors told us he had a heart defect and that he would need surgery. We didn't want to neglect his health but we just never had the money to get him treated. And now his condition is far worse than we ever imagined it could get.”

Pavan, now 11-years-old, was born with a heart condition. He used to fall ill frequently and was always weaker than other kids. When he was just one, his parents Anjaneyulu and Bhagyalakshmi took him to a doctor at Hyderabad for a checkup. The doctors said that he wouldn’t need surgery right away. Over the next few years, whenever he would fall sick, his parents never had the funds to take him to a doctor. And his health kept getting ignored, due to the dire financial condition of his family.


Pavan with his mother

Six months ago, Pavan was down with a high fever and started having severe breathing problems. Even walking 10-15 minutes made him so breathless that he would have to gasp and struggle for air. Anjaneyulu took him to the hospital again. Lack of funds came in the way again and his tests kept getting delayed.

His father finally took him to Chennai to get his tests done. The reports are still awaited, but the doctors have told him very clearly - that they cannot delay Pavan’s surgery for much longer.

Pavan is a bright kid, despite his illness. He loves going to the school and spending time with his friends. But since he fell severely sick 6 months ago, he had to stop going to school. Day-to-day activities started tiring him out and he didn’t have any strength left to do anything. His sickness changed his life and doesn’t let him enjoy the normalcy other children his age enjoy.

Pavan’s family goes to sleep hungry half the time

“We’re from a very poor background. All our property was sold years ago because of family fights. There’s no one I can even beg money from, for my son’s treatment. My mother is old and sick, and I’m not to take care of her either. I want to kill myself, but I can’t even do that since my family will be left in the middle of nowhere if I died. I have to be there for them.” - Anjaneyulu.

Anjaneyulu and his wife both work as seasonal labourers. Their wage is minimal and sometimes when there’s no work, they are forced to go to bed hungry. They’re desperately trying to make ends meet while also providing education to their children, by sending them to a government school. Now they have no money for Pavan’s treatment.

Unfortunately for Anjaneyulu, whatever little property they had, had to be disposed of because of family feuds and there’s no backup for him to depend on. They can’t delay Pavan’s treatment any more since they’ll lose him if they do. But in order to save him, they need your help. Only your contribution can save this little boy from succumbing to his illness.