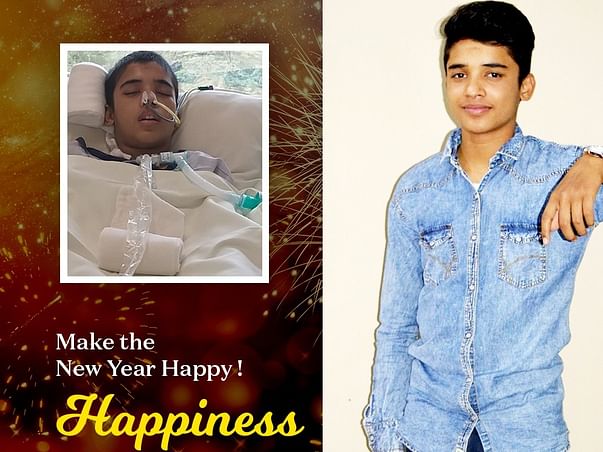 Share
“The pain you feel today will be the strength you feel tomorrow” is a handwritten note by Ansh’s elder brother on the wall behind his hospital bed. The wall has other quotes and some pictures of Ansh too. His parents are desperately waiting for him to wake up. They are doing everything they can – praying, talking to him, getting friends and family to visit. But Ansh, a state-level athlete, is still in a coma.

Ansh(17) a state-level athlete, was on the field in college, preparing to go for a sports camp when he suddenly fainted. He was immediately rushed to a local hospital in Etawah, Uttar Pradesh and from there to Max Hospital, Delhi where he was diagnosed with Guillain Barnes Syndrome (a condition in which the immune system attacks the nerves) because of which he couldn’t feel anything below his neck area. After being treated for about 3 months, Ansh started walking with support and was eventually discharged from the hospital.

"Doctor said," his father mentioned with pride, “It usually takes longer but his sportsman spirit helped him recover sooner than the estimated time."

After 10 days of being discharged, he was called back again for tracheostomy tube decannulation. Post which, on the same day, he had a brain stroke.

She’s hoping that if he hears something related to his training, he would wake up. His mother is constantly moving his fingers, helping him exercise. They even arrange for video calls, hoping for him to react to family members who say all things encouraging!


“After getting admitted to Major Dhyan Chand Sports College, he just wanted to clear the nationals and represent India. That is what he was tirelessly working towards.” says his sister, smiling while looking at him.

There is hope for Ansh, but he needs your help to make it

Doctors are hopeful for Ansh but the treatment is extremely expensive. Ansh’s father is a social worker for the last 20 years. For his treatment, they’ve sold their land and household goods back in Etawah, along with their savings and jewellery. They’re living in a rented space in Saket, close to the hospital for several months now.  Ansh needs to stay in the hospital longer to recover but his parents have no means to afford it. With your support, Ansh can get a new lease of life.

Together we can save Ansh!