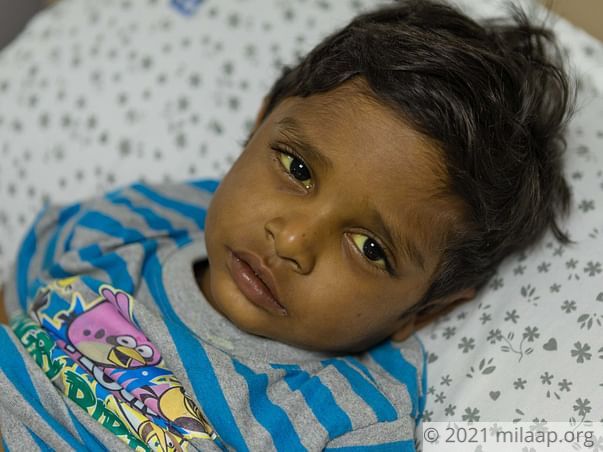 Share
“We thought he had jaundice, we didn’t even know that liver could fail. He’s in so much pain now and we can’t make it go away.”

Barely a month ago, 4-year-old Vamshi got a high fever and starting throwing up. Within a day his skin and eyes turned yellow and his stomach started swelling. They took him to a doctor in Adilabad, who suspected that the problem was more than jaundice and needed immediate medical attention. Hence they brought him to Rainbow hospital in Hyderabad. Here, after undergoing tests Vamshi was diagnosed with liver failure.

Life changed for Vamshi's family, with his diagnosis

Vamshi’s family was taken aback by the diagnosis. They had never thought the problem would be so severe. The thought of losing their son over liver failure gives them sleepless nights. They had never anticipated Vamshi had anything more than jaundice. But a life-threatening condition like liver failure hadn’t even crossed their minds. Now Vamshi is in the hospital, awaiting a liver transplant, in insufferable pain all the time.

Vamshi still can’t keep his food down and ends up puking all he eats. It makes his parents, Venkat and Jayshree miserable that he is suffering this way. He is on emergency medication but his condition isn’t improving and the doctors told them that he needs a transplant at the earliest, in order for him to survive.

Before Vamshi got diagnosed with liver failure, he was just like any other kid his age. He used to enjoy playing and couldn’t wait to start school along with this sisters. He was an active, cheerful young child whose life took a turn for the worst for no fault of his own. Now all he does is cry in pain and wait for all of this to be over so that he leaves the hospital bed and run and play with his sisters again.

His elder sisters, Akhila and Nikita; 8 and 5-years-old respectively, don’t understand what’s wrong with their little brother. All they know is that he’s very sick and needs to stay in the hospital till he gets better. They miss him and spend time with him whenever they can so that he doesn’t feel lonely. Seeing his son in this condition, all Venkat can think of is arranging money for the treatment.

Venkat can't afford this treatment due to his financial condition

“I have always tried to give a decent life to my family. I never thought a situation like this will ever come to us. What have we done to deserve this?”

Venkat works as a seasonal farm labour and makes only Rs 3000 a month. Within this amount, he struggles to make ends meet, while also providing both his daughters with education. For someone who earns such a meagre amount a month, affording a liver transplant is a far cry.

So far Venkat has spent more than Rs 1 lakh for his son’s treatment, by borrowing money from his friends and acquaintances. But now he’s run out of that too. Venkat and Jayshree are trying their best to save their little son, but they can’t do it on their own, they need your help.

Venkat’s poverty shouldn’t decide little Vamshi’s fate. Your contribution can make the difference between life and death for him.