Help Mohammed Talha Get Treatment For A Congenital Blood Disorder | Milaap
This is a supporting campaign. Contributions made to this campaign will go towards the main campaign. 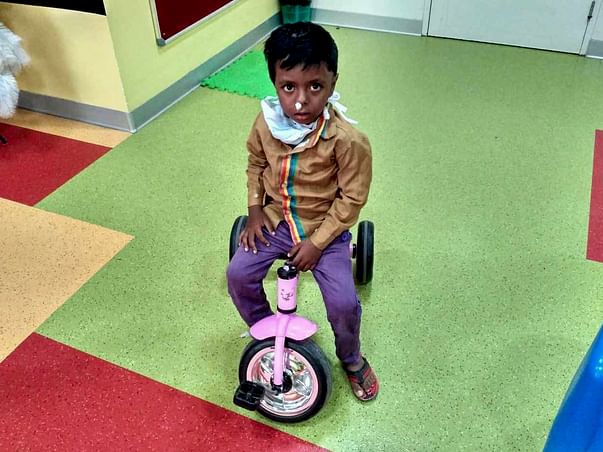 Mohammed Talha was just 2 years old when blood began to drip from his nose. He had a high fever, and the sight of blood dripping scared this little boy out of his mind. After a long and expensive chase after the diagnosis, the family discovered he had a congenital blood disorder. Unable to afford the cure, Abubakar Siddiq has been struggling to save every rupee possible. Now Talha's condition is critical and needs this surgery immediately to stay alive.

It was the first time he saw blood, and it just did not stop

Syeda and Abubakar have 4 children - 2 boys and 2 girls. When Talha came down with a fever, they did not think it was serious until he began to bleed from his nose. The elders in the house and in the village said it was from heat, until his condition became serious.

"The bleeding did not stop. We had taken him to local doctors before. It did not help. This time, we rushed him to the hospital, they sent us to Sagar Apollo in Bangalore. We were there for 10 days until they found out that he has a disorder where his body stops making platelets."

Congenital amegakaryocytic thrombocytopenia is where the bone marrow cell responsible for making platelets is low in number, causing the body to stop making red and white blood cells over time. Talha has started bleeding, and this is life-threatening as his body is losing its ability to clot.

"I cannot let him play with his brothers and sisters. I did not send him to school either. Yes, he fights with me. Asks me why he cannot do normal things. But even if he falls and gets a bruise, it can threaten his life."

At 5 years, a child should be playing with mud, water, toys - not blood

Abubakar moved his son to NH as soon as they received the diagnosis. The cure has always been bone marrow transplant. Unfortunately, with Rs. 300/day income he could not afford it. For 2 years, he has been working hard as well as trying for PM/CM funds to save his son.

"I am not well read. I did not know it would take so long for them to revert. In fact, we got CM funds of Rs. 2 Lakhs in the middle and still needed Rs. 13 Lakhs. Now, we can't use it because there is a validity on that grant. I'm at the office now. Even today they are saying the same thing. Come today, tomorrow or day after."

This boy is now in pain, and surgery is the only way to keep him alive

Talha is bleeding from his nose and mouth. He cries to his father in pain and wants it to stop. The sight of so much blood scares him. His tiny legs hurt. He is unable to eat because the taste of blood makes him nauseous.

"He runs and says Appa it is bleeding, Appa blood Appa every day. He gets so tired that he keeps sleeping. This is not the life for a 5-year-old. I need to save him. I need your help!"

Abubakar is trying his best to arrange for funds but without any luck. The estimated cost for this transplant is Rs. 15 Lakhs. Without this treatment, Talha has just months left on the clock.

Your contribution can save this baby boy from a terrible fate. 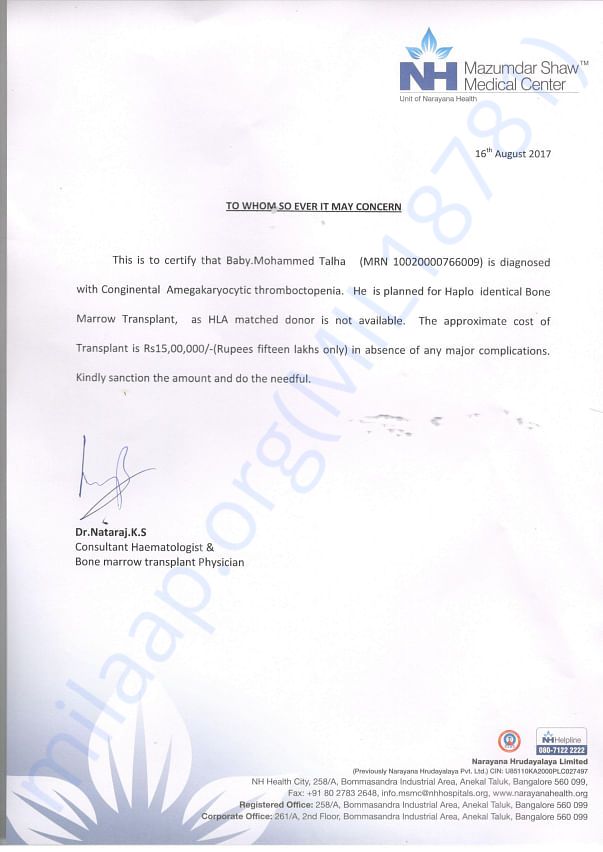 Talha is currently at home and he's doing well now. He's under prescribed medication. He's living an active life of a normal kid, his parents are extremely happy to see him out of the hospital.

This couldn't have been possible without the support, We sincerely thank each one of you for the love and support which have shown towards us.
May God Bless you all!

We apologies for a delayed update.
We're happy to inform you all that Talha underwent a successful transplant surgery on 9th November, his younger sister was the donor. There were no complications during or after the surgery. Doctors have suggested monthly check-ups to monitor his health and check for rejection symptoms but as of now he is an active and a happy kid.

We are really thankful to all of you who contributed towards this campaign,
Your love and contributions helped us in the most difficult time of our lives.
Thank you,

Here is a quick update on Mohammed Talha's health. He is doing better now compared to before. He would bleed through his nose and ears which has reduced comparatively. Approximately 3 transfusions happen in a month, out of those three transfusions two transfusions are of blood and one of the platelets.

He has a 50% match with his sibling who will be the donor at the time of the transplant. His father is still trying to arrange funds from any other source possible so he can complete the transplant procedure. He has applied for CM fund as well as PM fund. Would request you to share this campaign further with your friends and family, so Mohammed Talha can go back home and play with toys again.

Thank you for all the support. Would request you to please pray for his health.

u
You are sending a message to
umiaa
Go back 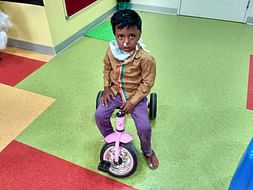