Help The Wall and Us Foundation remove loneliness from this world! | Milaap

Help The Wall and Us Foundation remove loneliness from this world! 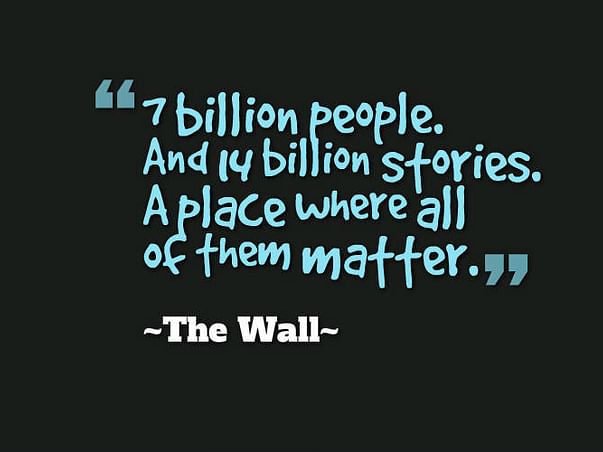 The Wall and Us Foundation's journey began with a simple blog where I wanted to give people a place to share a piece of their life so that someone somewhere can read it and know that they are not alone. I began this at one of the worst phases of my life and it became a last ditch attempt at salvation.
Since then, and 40 stories later, this simple idea has grown and evolved to become something much bigger than me!
For the past 2 months, I've been trying my level best to raise funds and start an organization with one simple goal- to remove loneliness from this world.
I believe that society has forced us to create these masks (read walls) all around us. Judgment is everywhere and people are more disconnected than ever.
I want to give the world a platform to come and share their stories. Their pain, grief, fears, happiness, emotions and essentially anything and everything that makes us who we are- human beings.
What does it serve?
One day when someone reads it they'll know that they're not the only one. They'll know that there is nothing wrong with them. In this community, everyone would get a friend. It will be built on goodwill and solidarity.
We hope to launch a magazine someday too.
Now to begin this we'll need a website and essentially a platform where people can come and do that. They can chat with like minded people who will not try to help them or fix them, they will just be their friend.
I've been to 8 mental heath experts with more than 20 degrees between them and I know all I've ever needed and wanted was someone who JUST listened. A friend.
Sympathy and empathy are two very different things and people don't get that.
For 2 months I've tried to raise money relentlessly losing more than half my hair and sanity. I've been told this idea is flawed. I've been told to stop dreaming so much. I've been made to wait just to be berated at. I've tried but I cannot bring myself to ask my parents for such an immense sum of money.
I am tired, frustrated and losing faith.
This is the last throw of the dice.
How will we use the donations?
I will require one lakh with my own savings to create a definitive and self-supporting platform with everything we'll need. It will give the world a platform where they can come and share their stories without any judgment whatsoever so that when someone in this world reads it they will know that they are not alone. Also, they will be able to chat with back-end users who will not be mental health experts, just someone who will be their friend and listen. Everyone in the mental health genre is going about everything all wrong. What they do not realize is that most people are not looking for answers or for people to help them. They are amazing. They do not need help. They just need someone to listen. A friend. We want to bridge this gap and give people access to that. A friend. All this while allowing them to remain anonymous.
The remaining will go towards funding the magazine, The Wall and Us where we will compile some of the stories we've received from people and send it out digitally and in print, the proceeds from which will go towards furthering the foundation and 20% of it will go as donations towards NGO's who like us are trying to change the world in their own way.
I have no idea if this will work but if this doesn't then I don't know how to make this work anymore. Like I said, this is it! Please, help us help others.
Help us save humanity.
Thanking you,
Aitijya Sarkar
Founder
The Wall and Us Foundation
For any questions drop in a mail at- thewallandus@gmail.com.
Donate
Report fundraiser
See how thousands are crowdfunding for their causes on Milaap
Content Disclaimer: The information and opinions, expressed in this fundraiser page are those of the campaign organiser or users, and not Milaap.
If such claims are found to be not true, Milaap, in its sole discretion, has the right to stop the fundraiser, and refund donations to respective donors.

Great idea, congratulations on your venture

Congratulations! You made it through 😇

Great idea, congratulations on your venture

Congratulations! You made it through 😇

You are sending a message to
Aitijya Sarkar
Go back 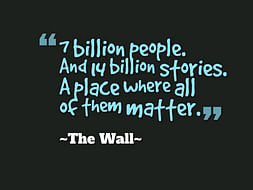 Help The Wall and Us Foundation remove loneliness from this world!