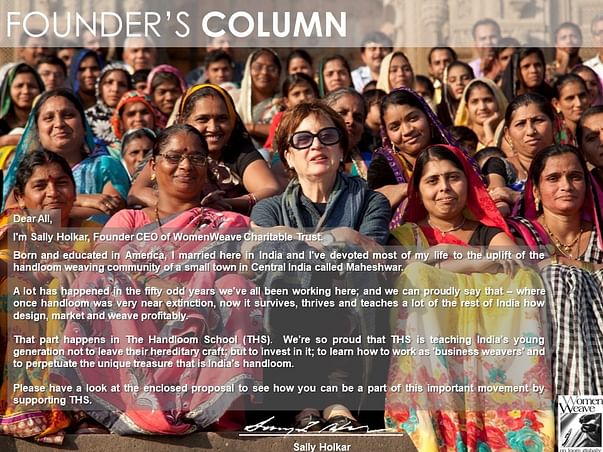 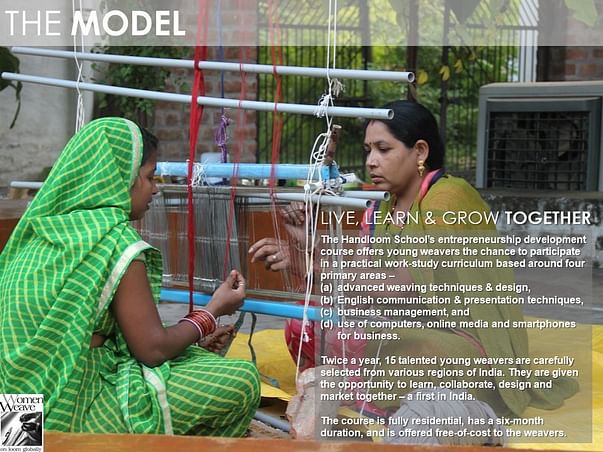 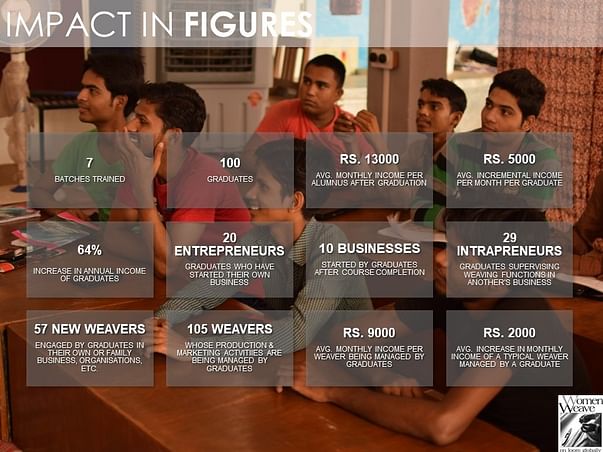 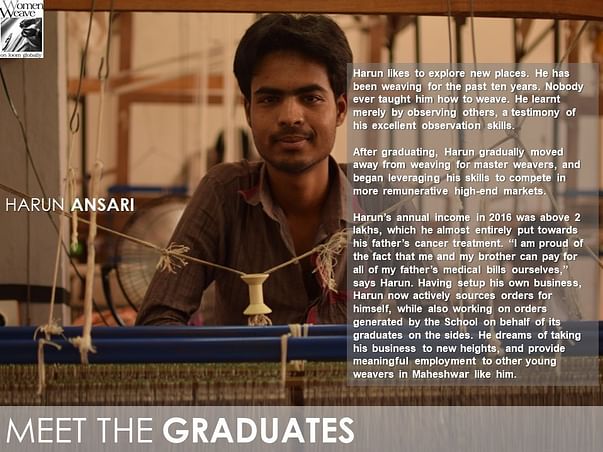 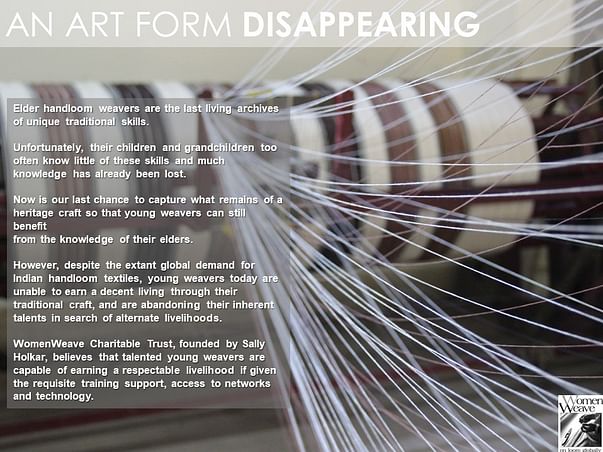 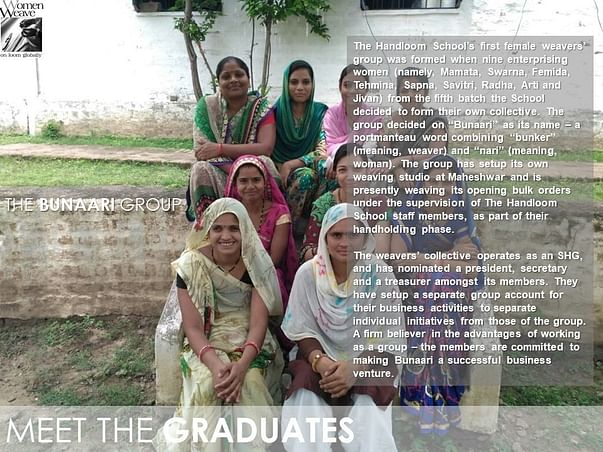 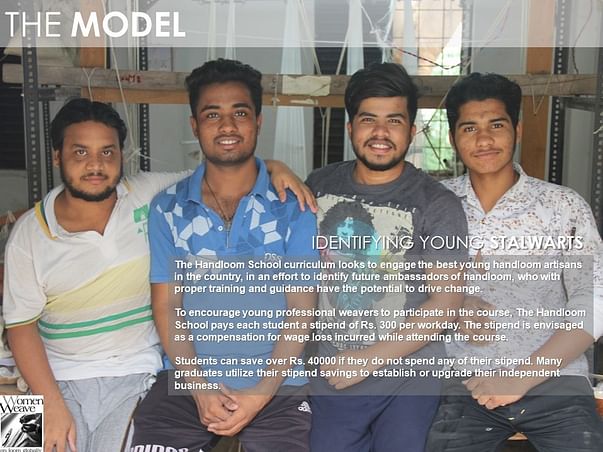 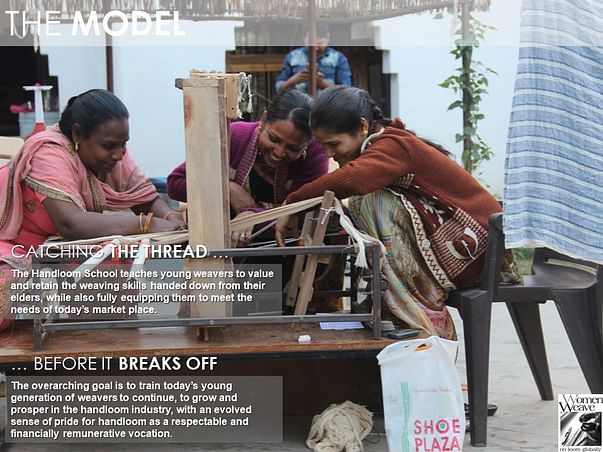 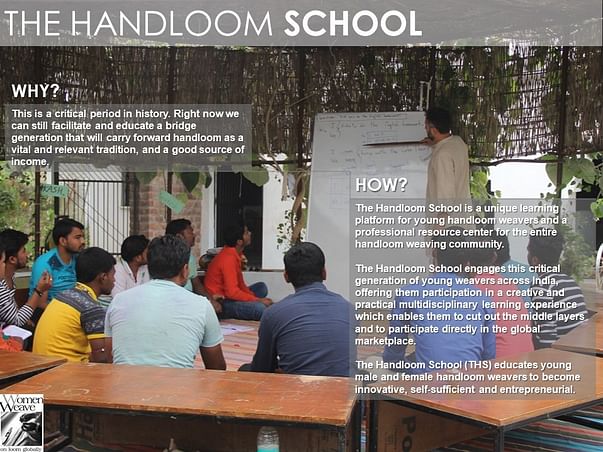 If a picture serves to say a thousand words, a video can communicate that what tens of thousands of pictures fail to do.

We include links to a few video on The Handloom School initiative in the hope that it will make the rest of the text a more engaging read.

Indian handloom textiles are valued globally, with high demand for its old traditions and techniques. As the country’s second largest economic activity after agriculture and the largest handloom industry in the world, it is distributed across more than 400 handloom clusters and provides direct employment to over 4.3 million people.

However, weavers today are unable to understand and respond to changing tastes and requirements of global consumers, or meet the high quality standards of international markets, which leaves them unable to leverage the extant global demand to boost their livelihood security. As such, talented weavers are increasingly disillusioned by their craft and believe their hereditary profession to be both non-remunerative and unfashionable. It is imperative that their education system is defined, strengthened and made more relevant to address the challenges faced by the young weaving community today. However, there are very few academic institutions which can furnish weavers with the skill to operate in today’s mercurial yet fertile business landscape.

WomenWeave formally launched “The Handloom School” project in 2015 with the belief that talented young weavers are capable of building sustainable livelihoods if given the requisite training support, access to networks and technology; and that, with the right curriculum, an educational program for weaving youth can be instrumental in solving most of the issues that plague the Indian handloom sector today.

The Handloom School (THS) is a first-of-its-kind networked learning platform for young handloom weavers and a professional resource centre for the weaving community. In a unique approach, The Handloom School provides young handloom artisans from various regions of India the opportunity to live, work, learn and grow together as weavers, and also as individuals. The overarching goal is to train today’s young generation of weavers to continue, to grow and prosper in the handloom industry, with an evolved sense of pride for handloom as a respectable and financially remunerative vocation.

THS engages a critical generation of young weavers across India, who are16-30 years of age and have completed the 10th standard of education, offering them participation in a year-long program tailored to provide a practical, multi-disciplinary learning experience that,The course, termed Certificate in Design and Enterprise Management (CDEM), unfurls in the following 5 segments.

The course curriculum is built around four primary areas, viz. (a) advanced weaving techniques & design, (b) English communication & presentation techniques, (c) business management, and (d) computers, online media and smartphones for business, and has been tailored in accordance with their needs.

The Handloom School curriculum looks to engage the best young handloom artisans in the country, in an effort to identify future ambassadors of handloom, who with proper training and guidance have the potential to drive change. To encourage young professional weavers to participate in the course, The Handloom School pays each student a stipend of Rs. 300 per workday, during the six-month on-campus segment. The stipend is envisaged as a compensation for wage loss incurred while attending the course. Students are encouraged to save much of the amount they receive as stipend to form a respectable corpus by the end of their term. Students can save over Rs. 40000 if they do not spend any of their stipend. Many graduates utilize their stipend savings to establish or upgrade their independent business.

The Handloom School targets young male and female weavers belonging to traditional, as well as non-traditional, weaving communities and families, from all major Hindi-speaking handloom clusters of India. The Handloom School envisions an ideal participant to be between the ages of 18-30 years of age, to have passed their tenth standard examinations, to have a working knowledge of Hindi and English, to have been weaving professionally at least for 2 years, and to have some mastery in at least one aspect of weaving.

Since February 2015, THS has trained 6 batches of students and has a network of 87 graduates from 11 states of India. The seventh batch graduated very recently, on August 26, 2018, and had 13 students. The eighth batch is presently in session, having commenced on September 27, 2018.

i. The project has been instrumental in bringing a change in the views of its graduates regarding the perception of employment opportunities, belief on a more positive future, skills and behaviour.
ii. Through the program, the young weavers have developed a newfound respect for their traditional craft and traditional weaving techniques, and also a greater acceptance of use of technology.
iii. Through its graduates, the School is working towards building a cross-country network of weaver for collaborative work, and greater impact at policy level and change in business practices, in the long run.

The direct cost of hosting an entire batch of 15 students for a fully residential six-month course is about Rs. 15.9 lakhs, not including support costs such as faculty honorarium and expenses incurred by THS staff while traveling to major handloom clusters for student selection. When these support costs are included, the cost of hosting one batch works out to be approximately Rs. 20.4 lakhs. In other words, The Handloom School spends approximately spends Rs. 1.06 lakhs per student (Rs. 1.36 lakhs including support costs as mentioned before) as direct student support expense during the on-campus stage.

A total of 105 weavers are associated with 49 of the School’s graduates working as entrepreneurs or “intrapreneurs”, i.e. an average of 2 weavers employed by one such graduate. From this association, on an average each weaver has witnessed an increase of 29% (or, Rs. 2000) in their monthly income, which accrues to an annual incremental income of Rs. 24000. 56% of graduates go on to become entrepreneurs (or, “intrapreneurs”). The indirect (financial) benefit from training one graduate may, thus, be calculated as follows.

The total economic benefit from training one weaver is, therefore, Rs. 86880.

When compared with the cost of training a single student (viz. Rs. 1.36 lakhs), the programme has a payback period of a just over 1.5 years.

Through this fundraiser, The Handloom School intends to raise a sum of Rs. 9.744 lakhs to support the following two components of its eighth batch of students.

The eighth batch of The Handloom School commenced on September 27, 2018. It comprises of fourteen regular candidates and two sponsored candidates. The fourteen regular candidates were selected after three intensive rounds of selection process and are young weaving artisans from the states of Gujarat (4), Madhya Pradesh (4), West Bengal (2), Chhattisgarh (2) and Uttarakhand (2). The two sponsored candidates are members of the women's cooperative, Looms of Ladakh.