Farmer's 5-year-old May Succumb To Kidney Failure Without Help | Milaap
This campaign has stopped and can no longer accept donations.

Farmer's 5-year-old May Succumb To Kidney Failure Without Help 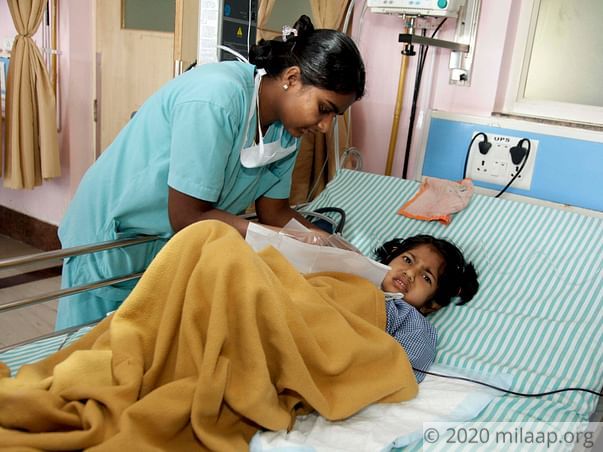 “I believed that there was absolutely no chance for her (Tharishka) condition to get any worse. But within just a few days I was told that if she doesn’t get additional and timely treatment, her kidneys will fail and she will be no more.” – Tharishka’s mother, Sheetal.

Tharishka, in pain, and Sheetal at the hospital

Suffering from a rare and deadly disease, and on the verge of kidney failure, 5-year-old Tharishka condition has worsened rapidly and now she is extremely critical in the ICU. She needs to be in the ICU for a week and needs additional treatment to avoid complete kidney failure. She can recover, but her parents fear losing her because their financial condition is so weak that they have nothing left to save her.

Tharishka is very critical and her kidneys are failing

Currently, Tharishka is so critical that her treatment, for now, could not be delayed. She is in the ICU, undergoing dialysis, and she needs to remain there for, at least, a week more and then await additional life-saving treatment.

“After this phase of dialysis, if she doesn’t get treatment, her kidneys have a very high chance of failing. Since the past few days, she has a high fever and she keeps throwing up. To me, she looks like a skeleton compared to what she was before. She has vomited so much. If she eats anything she throws up twice as much. This is so terrible to watch. She was a girl who would literally eat or at least, taste everything, and now, she doesn’t even eat a bit. What is happening to my baby?” – Sheetal

Tharishka is suffering from a rare and deadly disease

Less than a month ago, Tharishka was completely normal and extremely active, just like any other 5-year-old. Along with her family, she was enjoying her stay at her aunt’s house in Bangalore. Suddenly, she was down with high fever and her health was getting worse by the hour.

“She would just sit on the couch and wouldn’t want to move. Being a very naughty, playful and active girl, this was very odd. She would just not want to eat anything too. I told her that I wanted to take her outside to make her feel better, but she was just too weak to move a muscle. We rushed her to the hospital.” – Praveen, Tharishka’s father

All sorts of tests were performed on Tharishka for 7 hours. When she was diagnosed with the hemolytic-uremic syndrome, a rare and deadly disease which causes kidney failure, Sheetal and Praveen were completely shattered. This disease can prove to be fatal very quickly if left untreated.

“My child is dying from the inside and I’m still shocked that this has happened in less than 2 weeks. How can an active child get so critical so fast? Her kidneys will fail soon if we don’t get her treated after the ICU. “ – Sheetal

Her hemoglobin levels had dropped to 5, which is less than half of what a normal 5-year-old should have. This was dangerously too low and she had to be admitted.

Only additional and timely treatment can save Tharishka’s life

Apart from fatigue, high fever and throwing up, the 5-year-old is suffering from blood clots in her kidneys, which are at high risk of failure. She is extremely critical and to survive, she needs dialysis and additional complex treatments later. If she doesn’t get the treatment, she has high chances of dying.

All this is possible if she remains in the ICU for a week and gets the treatment later. Her father, a farmer, is running out of time to save her.

Sheetal and Praveen are racing against time to save Tharishka

Hailing from a small village in Karnataka, Praveen is a farmer who earns a meager salary of Rs. 4000 every month. Until now, he has exhausted all his savings and spent Rs. 30,000 on Tharishka’s treatments. Sheetal and Praveen have a 10-year-old daughter, Samiksha, too.

“Our financial condition is so poor. Rainfall has been reducing every year and the past few years haven’t really been profitable for farmers like me. Now, each day of dialysis costs around Rs. 35,000 which is more than what I’d save in a year.” – Praveen

Critical in the ICU, Tharishka needs to be there for a week and undergo dialysis, and await further treatment. This is her only hope of survival.

The total costs for the ICU stay and additional treatments are estimated to be around Rs. 4 lakhs. Praveen, simply, cannot afford this monumental sum even if he worked for decades.

Suffering and extremely critical due to a rare and deadly disease, 5-year-old Tharishka is on the verge of kidney failure if she doesn’t get additional treatments. Praveen, her father and a farmer, has nothing left to provide for her treatments and is running out of time. Now, he needs your help to save his daughter.

Your support can save 5-year-old Tharishka.
Estimation letter 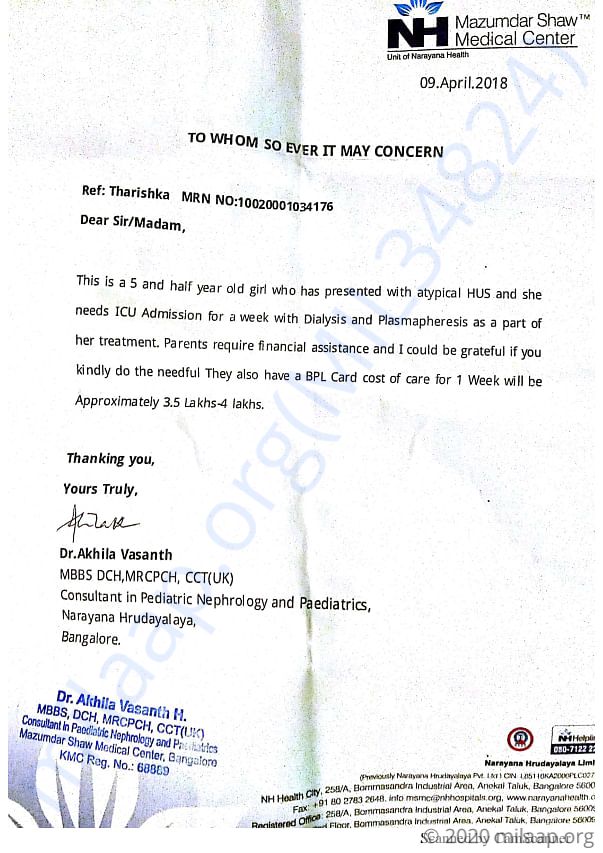 Here is a quick update for you.

She is doing better now, they have to go for follow up to the hospital

Doctors have advised that based on her health they will change medication. However her stomach still hurts and loose motion still prevails

But there is much more comfort with the prescribed medicines.

Thank you for the wonderful support and love.
Dear Supporters,

Thank you for the wonderful love and support that you have shown towards Tharishka. She is undergoing treatment for HUS (Hemolytic-uremic syndrome). This is a syndrome where the kidneys stop normal functioning due to an acute kidney Injury and the blood circulation also breaks down wherein the antibodies in the blood increase by an abnormal level.

She has shown tremendous recovery and the process of removing antibodies now is being done on alternate days. This will eventually come down to 1 time a week in about six weeks time. Her kidney is also recovering and the frequency of dialysis will reduce.

Thank you all once again. Do pray for her recovery. Will keep you posted.

Report fundraiser
See how thousands are crowdfunding for their causes on Milaap
Rs.628,809 raised

May Allah give you the strength to get over this pain.

may God bless the child

May Allah give you the strength to get over this pain.

may God bless the child

S
You are sending a message to
Shyam
Go back 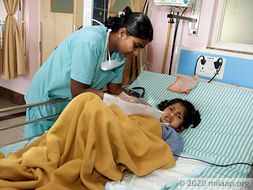 Farmer's 5-year-old May Succumb To Kidney Failure Without Help