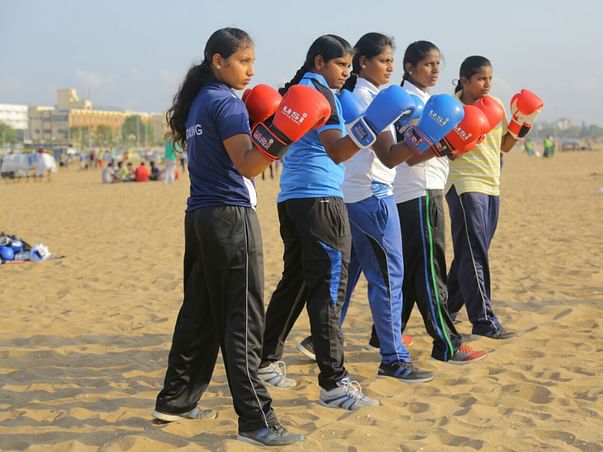 The following was written on behalf of Narmadha for her fundraising campaign.

Narmadha is a National level boxing champion who dreams of sending one of her own girls whom she coaches to the Olympics some day.

Though she didn’t make it to the international platform, Narmadha has made up her mind to ensure that her girls do. To make her “mission” a success she has roped in her old classmates and together they are teaching children from economically poor backgrounds the skills of boxing. By teaching them boxing Narmadha hopes to bring about behavioural and developmental changes in the children she coaches. Narmadha teaches these children boxing free of cost and makes a living by working as a gym trainer during the day.

"Chennai girls are tough. They have the guts to dream. In places like Manipur, where boxing is almost a part of regular schooling, they have good training facilities and boxing gears. But even though Chennai girls don’t have that, they have no doubts that they can punch their way to the Olympics" says Narmadha.

Narmadha herself had gotten into boxing in 2006 when she was in Class 6, thanks to a Chennai Corporation initiative. “We didn’t even know what the sport was called, but we would go to tournaments and feel happy when we won a medal,” recalls her friend and fellow player Sevvandhi. It was around that time that the state government had introduced boxing along with judo, karate and other such combat sports for girls in corporation-run schools.
"My speed is not what it was but if my girls make it to the big leagues then I will be more delighted than if I would have made it myself,” says Narmadha.

What will Narmadha to do with the funds?

Narmadha is looking to purchase the following equipment with the help of your contribution:

As of now, her friends and she have pooled in some money to buy three pairs of boxing gloves that are shared between 100 girls!

If she exceeds her fundraising target she will use the balance to purchase T-shirts, shoes and boxing shorts for her students.

This story first appeared on TheBetterIndia