Cook’s Son Who Aspires To Be A Chartered Accountant Is Fighting Cancer | Milaap
This is a supporting campaign. Contributions made to this campaign will go towards the main campaign.
This campaign has stopped and can no longer accept donations. 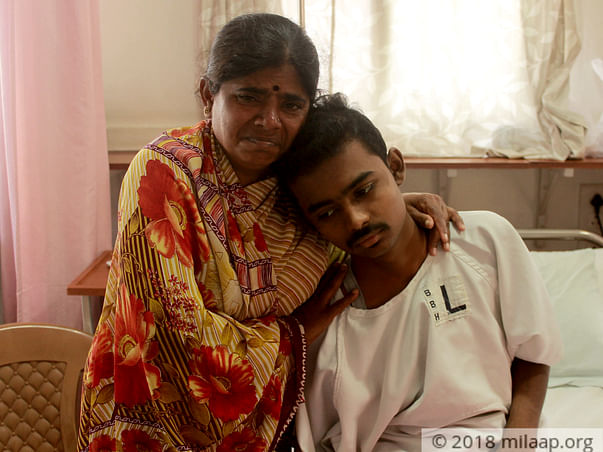 As soon as he completed his class 10 exams, Naveen took up a part-time job to support his mother and older sisters. It pained him to watch his mother, a cook, work so hard at her age. Naveen would go to college in the morning and by evening, he was working at the photocopy shop near his house. During the holidays, he would also work as a cashier in a supermarket to support the family and pay his college fees. He often said ‘Amma, one day I will become a chartered accountant and you won’t have to work ever again.’ All he wanted was to make Anjinamma proud. However, last year, Naveen’s life and dreams came to a standstill when he was diagnosed with blood cancer. His mother is now struggling alone to save his life.

Naveen and his mother used up all their savings to get his sister married. They were very happy that everything went well. In June last year, Naveen was going to start class 12. But he started experiencing severe stomach pain and weakness. In the next few weeks,  he was diagnosed with blood cancer in June last year. Anjinamma walked out of the doctors cabin in shock, desperately trying to hide the fear and sorrow in her eyes. As she walked towards Naveen, she tried to prepare herself to tell him the truth, but when Naveen asked her what the doctor said, Anjinamma couldn’t find the strength to tell him that he has cancer.


“I was just trying to shield him from the pain. He was so focused on working and becoming a chartered accountant, I didn’t want to break his spirit. Every time I tried to tell him, I found some reason to put it off for later. One day, when I was out for work, Naveen found his reports lying on the table. He went through the reports and found out that he has cancer. He was scared, but he never let it show.” - Anjinamma, mother

Just when they thought he had beat cancer, they found out that it was back

Anjinamma took loans from several people and started Naveen’s treatment. After 6 months of gruelling chemotherapy, Naveen and Anjinamma thought he was finally free from cancer. He was on medication for 8 months and went for a regular check-up. Naveen even started attending class 12 classes this year in June. Unfortunately, twenty days ago, Naveen found out that his fight was far from over – his cancer has relapsed. Now, Naveen needs chemotherapy for the next 6 months and a bone marrow transplant to be free from cancer. It’s the only thing that can save his life.

With the little money she earned as a cook, Anjinamma took care of her son till now

Anjinamma has been single-handedly taking care of Naveen ever since he was first diagnosed with cancer. She works as a cook in Anganwadi nearby and would juggle between work and Naveen’s hospital visits. No matter how tired she was, she never gave up on her son. However, with no financial support from her husband, Anjinamma is now struggling to get him the treatment he needs.


“The people we had borrowed money from for his treatment are now asking us to pay them back. We thought that once he was better, we both could work and pay off the loans. But now, I have nothing left to get him treated. I hardly get 4,000 in a month working as a cook in Anganwadi nearby, and that’s not enough to afford the treatment that costs 30 lakhs.” - Anjinamma

Ever since he was 16-years-old, Naveen has been working to help support his family. He aspires to become a chartered accountant one day and take on all the financial burden that his mother has been carrying for all these years. However, cancer has brought his life and dreams to a standstill. Naveen now needs chemotherapy followed by a bone marrow transplant to survive, but his mother, an Anganwadi cook, has nothing left to save him after spending and borrowing for his treatment the first time. Naveen needs your help to beat cancer and make his dreams come true. 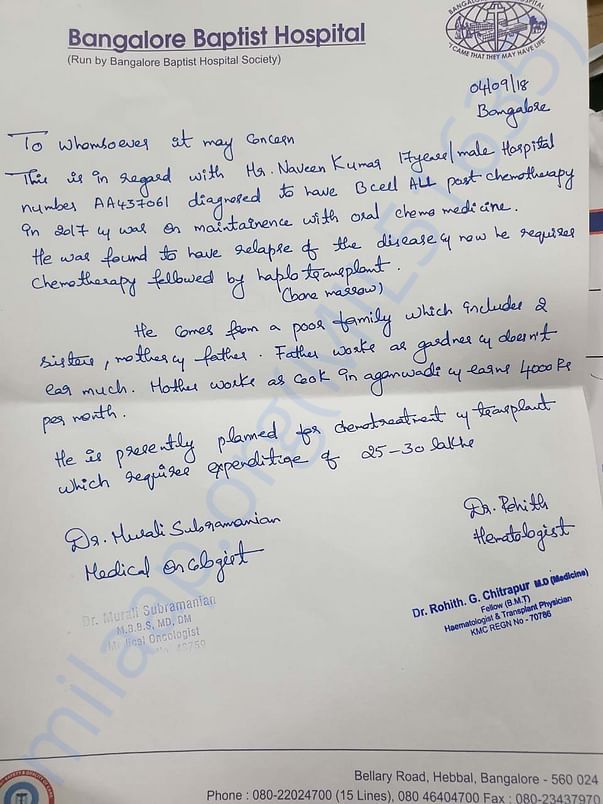 Thank you for the support, I have some unfortunate news to share with you today. Naveen has passed away due to complications. The funds raised will be transferred to his mothers account to clear the medical expenses.

Please do pray for his soul to rest in peace.

I want to thank all of you for supporting me.

I also had side effects such as fever and back pain. The doctors had prescribed some antibiotics for the fever.

Once again, thank you all for your love and support.

You are sending a message to
Kavitha Amar
Go back 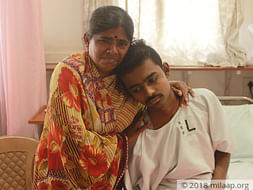