She Pleads With Her Helpless Father To Get Her Operated And Save Her | Milaap
This is a supporting campaign. Contributions made to this campaign will go towards the main campaign.
This campaign has stopped and can no longer accept donations.
Milaap will not charge any fee on your donation to this campaign. 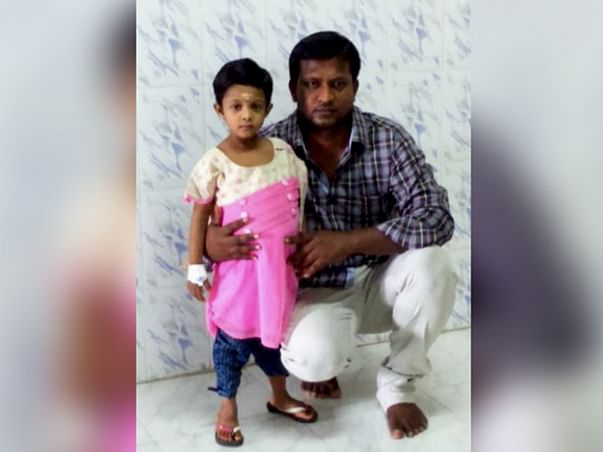 In all of the 5 years of her life, little Tejaswini has spent more time in the hospital than she has in school. At this tender age, she suffers from severe stomach pain, and throws up blood. She is in desperate need for relief from the pain and the fear. She loves going to school. All she wishes for is an ordinary life, where she can go to school like all her neighbors and cousins do, and to live free of the excruciating pain that no 5-year-old could possibly bear.

Being new-born, the doctors needed to find the cause for her serious condition. She was taken to Hyderabad, where upon being tested for mother’s milk, it was found that she was unable to expel food wastes from her body. This led to a suspicion regarding a liver problem, which was later confirmed.

At the age of 2, Tejaswini underwent a surgery
The blockage in her digestive tract preventing the expulsion of waste had to be removed immediately. She underwent the procedure at the age of 2. The blockage was successfully removed, but the swelling in her stomach never reduced. Soon after, she also started throwing up blood. It was at this point that a liver transplant was recommended.

“My wife and me are both daily wage workers. We are hardly able to afford the trips we make to hospitals. How could I afford the transplant? Where would I bring the money from? It would cost me in lakhs, and I have never even seen that much money together,” Tejaswini’s father Santhosh helplessly explains.

3 years of consultation and medication:
“We continued taking her to a good hospital in Egmore for the next 3 years. I kept my daughter alive somehow, on medication and injections. This itself cost me over Rs. 15,000 a month. That is way more than even my household income.”

These 3 years were probably the most difficult for Tejaswini’s father
“I had to choose between feeding my family, my two younger children, and keeping my daughter alive. There were days when we all went hungry to ensure she did not miss out on her medicines. I could not bear seeing my baby girl throw up blood like that. I had to save her.”
A ray of hope:
It was on the train one day, when Santhosh was taking Tejaswini to the hospital, that someone told him about a hospital in Kerala, where he could get subsidized treatment for her. He did not think twice before making his next visit to Kerala. Here, he was told about crowdfunding.

“We have nothing to sell. We sold my wife’s only ornaments, her bangles to make the trip to Kerala. Here, we were also told how urgent the transplant was. If there were really kind-hearted people who could give my daughter back to me, I would take that chance, and do all it takes to ensure she can undergo the surgery.”

Why they need your help.
Tejaswini loves going to school. She is not officially a part of any class, but whenever she goes back to her home-town, she loves going and sitting in a classroom and learning what is taught. She comes back home, and tells her parents about her day with all excitement.

Today, this bright 5-year-old is bravely living with a dying liver. The blood scares her, the pain torments her little body, but she is still holding on, hoping that her life will be normal some day.
“Can you imagine the helplessness of a father when his 5-year-old looks him in the eye and pleads with him to free her from this pain. I do not have the means to help her. Just the thought of how much trust she puts in me makes me feel guilty. All I wanted was to see my daughter educated and independent, but I have only been a bystander in her story of pain and agony.”
A small contribution on your end could save this 5-year-old, and answer the prayers of this helpless father. 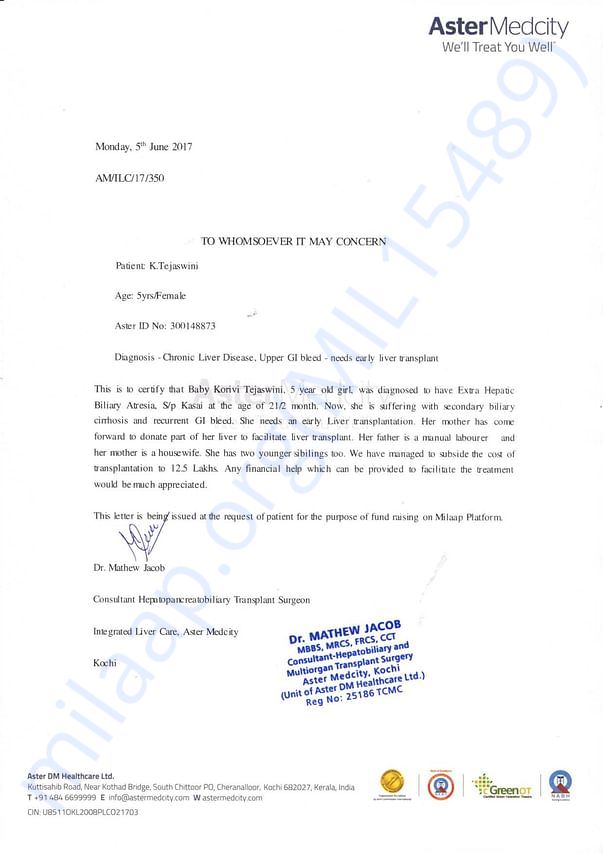 Ask for an update
Dear supporters ,

Tejaswini is doing well. She is going to school now. Thank you for all the support , it could not have been achieved with out you .

Thank you for the wonderful support that you have shown towards Tejaswini. She has completed the treatment and is doing good now. She comes to the hospital only for regular follow-ups.

Thank you all once again. Do pray for her health and speedy recovery.
Dear All,

We have some good news to share. Tejaswini underwent the transplant last week. She and her mum both are doing well. She has been discharged on Tuesday.

Thank you so much for coming forward to help this little one. You people have given her another chance to live.

4 Supporters expand_more
This campaign has stopped and can no longer accept donations.
$150 Million +
Raised on Milaap
Are you in need of financial support for medical or personal emergencies, or a social cause?
Start a fundraiser
Or
Know a similar organisation in need of funds? Refer an NGO
Campaign organizer contact_mail
T
Tejaswini
Beneficiary: Tejaswini Korivi info_outline
80G tax benefits for INR donations

Wish you success and a quick recovery.

Wish you success and a quick recovery.

T
You are sending a message to
Tejaswini
Go back 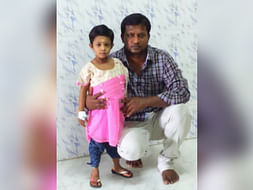