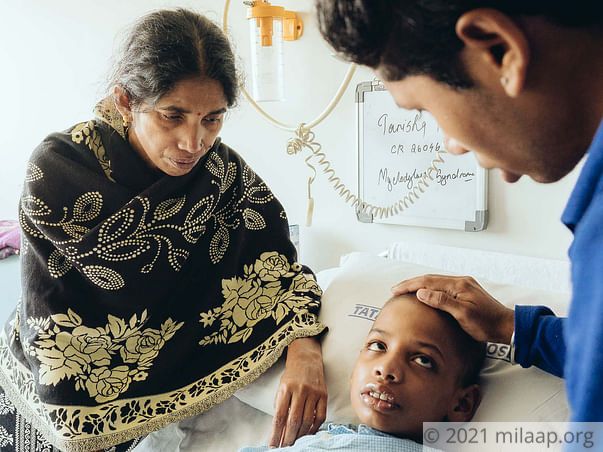 “I was taking my son to the hospital for his treatment when he saw children getting injections and ran away from the spot immediately. He didn't want to stay in the hospital even for a second as he was trembling in fear. I had held him tight and told him that it is the only way he can get better. Now, my son has become so tired and weak that he doesn’t speak at all. I don’t know how long he has to go through this endless suffering.” - Pramila, mother

Pramila took care of her children all by herself after her husband's death, was shocked when Tanishq got sick

Pramila’s husband Sanjay died tragically succumbing to a deadly infection 8 years ago. She has struggled to look after children Ashwin (19), Manthan (15) and Tanishq (11) ever since. Despite hardships, she always strived to provide them with a decent life. All her children were growing up healthy and happy until one day, 4 years back, Tanishq started getting black and yellow spots all over his entire body. Worried, Pramila rushed him to the hospital where he was found to have extremely low blood count. He underwent blood transfusions for 15 days and he got better. He was fine for the next few years until everything changed for the worse 4 months back. He was excited about getting promoted to 7th grade at school when he became sick again and his condition has been worsening ever since.


Tanishq when he was healthy

“That day as I was trying to wake up Tanishq, I saw his pillow covered in blood. His gums were bleeding profusely and his body was running at a high temperature. I tried to control the bleeding it by putting cotton but it didn’t stop. I got scared and took him to the doctor. After some tests, the doctor told that his blood count was dangerously low. He was given a few bottles of blood immediately but even that didn’t work. I thought I was going to lose my son.” - Pramila, mother

Tanishq is suffering from myelodysplastic syndrome, a dangerous condition that can occur when the blood-forming cells in the bone marrow become abnormal. This leads to low counts of one or more types of blood cells. Tanishq needs to undergo stem cell transplant otherwise he will have a brain haemorrhage. Fortunately, his elder brother Ashwin is a suitable donor for the transplant but Pramila is struggling to meet the transplant expenses.


“He was talking to his friends on the phone and looked happy while he was talking to them. But soon after he cut the call, he started crying. I did not tell him about his disease, but I think he now knows it. He used to be so scared and cried every time he sees the nurse coming to give him injections. But now he’s so used to this pain that he doesn’t cry anymore. He looks at me helplessly and asks me, ‘Mumma, will I ever be going home?’ I try to hide my tears and console him saying that we’ll go home after the treatment gets over.” - Pramila, mother

Having no source of income, Pramila cannot afford the transplant that can save his son’s life

Without a job, Pramila could look after her children with the help of her parents and relatives. To save her son from the deadly disease, Pramila sold her jewellery and even borrowed money from others. She has spent 3 lakhs so far only for his medical tests and check-ups. And now with no money left, she is struggling to afford the life-saving transplant for her son.


“I had to halt my elder son’s college education just to meet the treatment expenses. I did everything I could for my son to recover. But now affording a transplant worth 18 lakhs is next to impossible for me. All my son asks is to take him home but without any money for the treatment, I'm just very helpless.” - Pramila, mother

Pramila already lost her husband 8 years ago and is now risks losing her son too. Tanishq will have a brain haemorrhage if he doesn’t get treated soon. But having no source of income and after exhausting all the money she had just on her son’s medical tests, Pramila can't afford his treatment any longer. Pramila can save her son only with your help.

Your kind contribution can help this widowed mother save her son

Donate
0%
Be the first one to donate
Need Rs.1,800,000
Card, Netbanking, Cheque pickups
Or Donate using