My 1-year-old Keeps Losing Consciousness And May Lose His Life | Milaap
This is a supporting campaign. Contributions made to this campaign will go towards the main campaign. 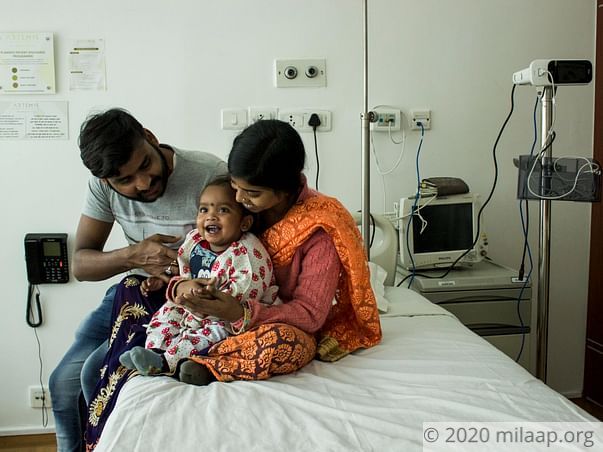 .Just a few years after losing her mother, 21-year-old Rupanjali feels terribly broken after finding out that her 13-month-old son, Surya, is suffering from a severe and fatal blood disorder. Now, after months of struggle, a bone marrow transplant is the only way out but her family’s financial condition is making it difficult for her to save her son.

Surya was completely normal until 7 months after birth, suddenly, he lost consciousness for a while. Residing in rural Bihar, he was first diagnosed with a heart problem. But, even after all the medicines and treatments, Surya was still feverish and coughing all the time.

Rupanjali and her husband, Ram, got their baby to Gurgaon where he was shockingly diagnosed with Thalassemia Major, a severe blood disorder. Now, Surya is suffering from anemia due to the disorder and has no energy to move, walk or play around like a normal baby.

“He loves to play with a ball. He can’t even do that right now. He’s just so weak and is just in one place all the time. This is my first baby and I don’t know why this is happening. The doctors in Bihar told us that he won’t be cured for life. That broke my heart but after coming here, there is still some hope.” – Rupanjali

Only a bone marrow transplant can save Surya

Surya’s only hope of survival is to get a bone marrow transplant. The 13-month-old has no sibling but is very fortunate to have matched with other unrelated donors. But, performing a procedure with unrelated donors increases the costs exponentially.

Surya needs the transplant immediately and his parents are running out of time to arrange the funds.

Surya needs a blood transfusion every month to survive

Until the transplant, Surya needs a blood transfusion every month. Each transfusion is around two times as much as Ram earns as a salary. This is just increasing the financial pressures and points out the need for an immediate transplant to save Surya’s life.


“We have sold my belongings to keep giving him blood every month. Honestly, we had no idea what Thalassemia is, until now. After finding out, I’ve just been in tears because he’s so small and already suffering. Only a mother can understand what I’m going through right now.” – Rupanjali

Rupanjali lost her mother and now fears losing her child

Just a few years back, in her late teens, Rupanjali lost her beloved mother. The grief of losing one’s mother never disappears and now, to make it worse, she faces the possibility of losing her 1-year-old baby boy.


“What has God done to me? When I was 15, I had such great ambitions. After my mom was taken from me, I’ve just been broken from inside. Now, my baby’s condition has become so bad. I just want to save his life. I feel like I’m so young but God has already put me through the worst in life.” – Rupanjali

“I love teaching kids and back in my village, I also tutor a lot of them. I graduated with a degree in arts and I want to pursue a B.Ed. and become a teacher at a school. After my mom passed, I had to take care of my 2 younger brothers and after marriage, I didn’t want to give up and was about to take some classes too. Now, I’m just focused on saving my son’s life anyhow.”- Rupanjali

Ram and Rupanjali are running out of time

Residing in rural Bihar, Ram works as a cashier at a mall far away. He earns around Rs. 6500 per month which is less than half of cost of a single blood transfusion. Rupanjali doesn’t work but is very ambitious despite what life has thrown her way.

The total cost of the bone marrow transplant is estimated to be around Rs. 25 lakhs, which Ram and Rupanjali cannot afford even if both worked for years.

“We are very poor, there is no way we can afford this. Everyone we know is as poor as us too. We have asked everyone and now, there is no one left to ask for help. Even if we sell our home, we won’t be able to raise so much money. It’s not a small amount. I’ve sold my belongings to give him the treatments up till now and now, we don’t know what more to do.” – Rupanjali

Ram and Rupanjali are left with no option but crowdfunding and they need our support to save Surya’s life.

13-month-old Surya Prakash is suffering from a life-threatening blood disorder, Thalassemia Major and needs an immediate bone marrow transplant to survive. After losing her mother, Rupanjali now fears losing her child because she has absolutely nothing left to save him. They need your support to save their son.

Your contribution will save 13-month-old Surya’s life 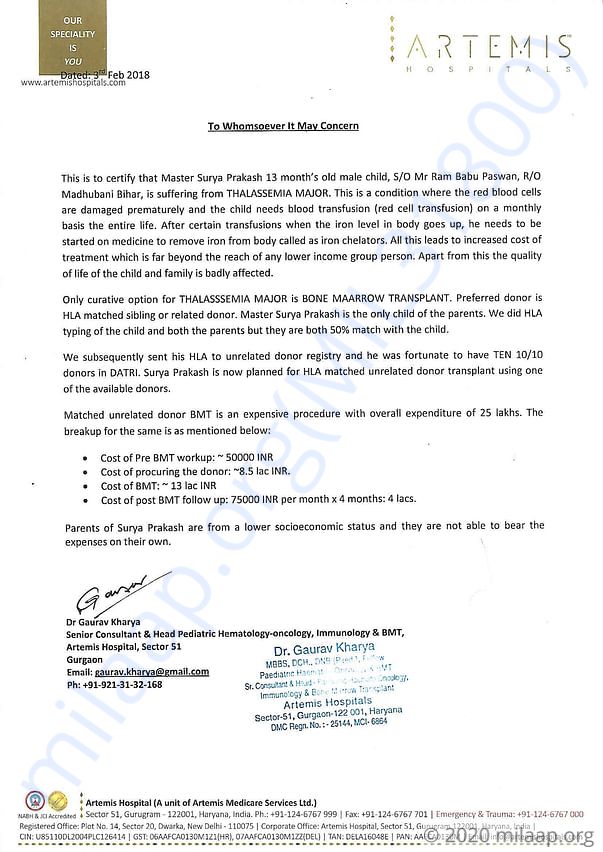 We have some news to share with you all today. Surya Prakash was supposed to undergo BMT, however, the transplant is not happening in near future due to medical reasons.

At Milaap, we release funds raised only against utilization for the intended purpose, supported by treatment update from the doctor as well as bills and invoices given to us. Hence no funds have been transferred since the transplant has not taken place.

We do understand that some of you may like a refund since the original purpose was not met. - 100% of your contribution will be refunded - please reply to us by 25th November 2019.

In case of a bank transfer made to the account number mentioned in the page, we would request you to share the account details with us by replying to the email or reaching out to team Milaap on feedback@milaap.org.

However, there is another patient name Nishita who is a case of Acute Myeloid Leukemia and her family is also struggling to arrange funds for her treatment is prolonged.

Here is the campaign link https://milaap.org/fundraisers/help-nishita-saraswat

Please reply to this email by 25th November 2019 if you wish to seek a refund for your donation as funds will automatically be transferred towards the above-mentioned campaign post that. 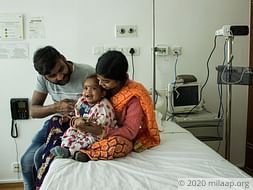