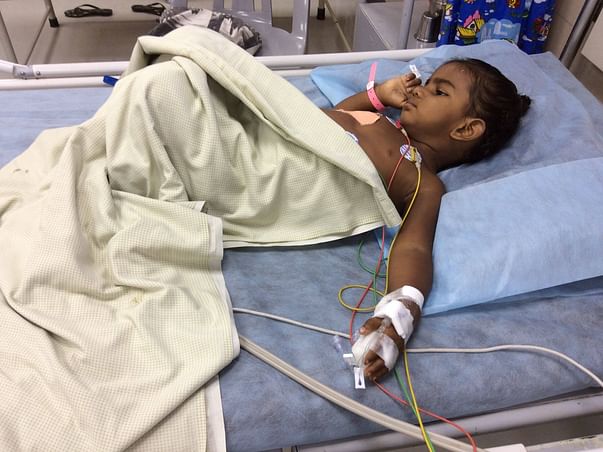 Share
Surnamugil, 2 years and 2 months old is the youngest member of her family of five. They were not very well off, but were very happy in their little world. She is the everybody's favourite, especially of her brothers, who enthusiastically teach her to write and recite. Now, the little infant has been diagnosed with Pneumonia/Empyema.
Currently, Surnamugi is in paediatric ICU , and will remain there for the next 3 days. If she is stable and normal after that, she will be shifted to a normal ward.
She has two elder brothers, one in the fifth standard and the other in college. Her father is a Lungi and Dhothi salesman who earns around 10,000 rupees a month, of which he spends 2,500 on rent. Her parents have already spent around 48,000 rupees on her treatment. The family had to close their only bank account and have sold everything possible, including her mother's mangalsutra. Gurusamy has also spent all the money he had kept aside for his purchase of raw material. They have sought help from every person they know and have also taken smaller amounts as loan from personal contacts. They now spend each moment banking on the generosity of each supporter.

Your support could help this little one live.