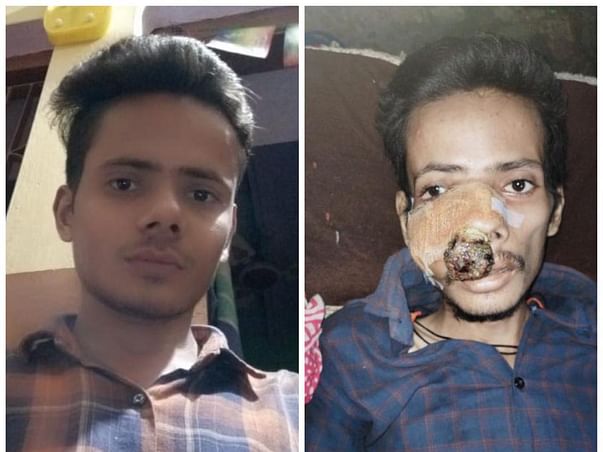 Share
This fundraiser is for Zaki, who spent his entire life supporting his siblings. He wants to ensure his brother’s gets a good education  but due financial constraints he only managed to save enough for his sister's wedding, which was also a struggle for him. Almost two months back in April he felt pain in his upper jaw and nasal area which took him to the hospital. Avoiding to accept the complication as he never had sufficient of money to get a proper treatment, he developed a malignant tumour  in his nasal and maxillary region. The only reason he is still alive is because he us still young, but still cannot beat this disease on his own. He requires a proper surgery that will removal the tumor , as suggested by Doctors from Jawaharlal Nehru Medical College, AMU. He is currently in Jaipur as the medical facilities here are cheaper but needs a donation of 5 Lakh for his surgery and other medicines. His family has spent all their savings on prior tests and treatment. His elder brother was looking after the expenses until now but being jobless made it almost impossible for him to look after his brother’s treatment, while also feeding his own family.
Today with your help and donation, we could take Zaki to the best cancer hospital in India and doctors said his tumour is not treatable and with a heavy heart I have to inform you all that he won't going to make it, he just got 3-4 months as per doctors told me but we still have hope for his family, through this fundraiser we can help zaki’s family have a small shop to make their ends meet, this fundraiser will help them financially before Zaki will leave us all.
I Wamiq Saifi, genuinely believe that it’s not only Zaki’s life on stake but a family of 7 as well including his old parents. His future will come with a lot of existential struggle which he has to bear but as his benefactor I can’t do it without your help. Therefore I'm requesting you to contribute to this fundraiser,