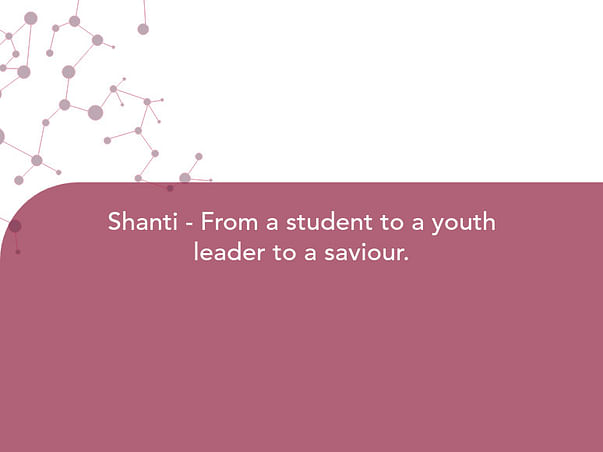 Shanti - From a student to a youth leader to a saviour.
A 12-year-old innocent girl who was completely clueless what was going on
with her and why people would look at her strangely. The girl was safeguarded
by 19-year-old Shanti. Although Shanti herself does not even know the actual
meaning of rape, she fully empathized with the plight of the rape victim and
helped her when she was going through a tough time.
Shanti is living in the urban village Suggmau – which is also the survivor’s village. Chhote Lal, Shanti’s father,
is a SMC member of Primary School. Being the youngest child among 7 siblings Shanti gains full support from
her family to study and progress in life. However, in this episode, her family were afraid of being trapped in the
case first, but later they backed her and helped the girl out.
Shanti currently studies in class 11 th in Rajkeeya Balika Inter College, Indira Nagar but she is more determined
and courageous than other girls. Shanti wants to raise her voice against all those things people think twice before
doing. Shanti engaged with Yeh Ek Soch Foundation in 2016 and has been working with it from then on. She is
a youth leader from her community area for Know Your Body Know Rights programme and makes other girls
and women aware of their rights related to their body, dignity and health.
When Shanti learned from her friends that a girl from their very own village was raped and got pregnant, she
decided to meet the girl first. After meeting the girl and understanding the case completely, she called
Madhulika and Hiba from Yeh Ek Soch Foundation and told each and everything about the girl over phone.
After fact-checking the case and knowing the mental status of the survivor, the organization managed to do a
counselling of the girl’s mother. On 30 th December at 3:00AM last year, when the girl was having labour pain,
Shanti herself called ambulance for her by going against the entire community and displaying her immense
courage. She not only called the ambulance but also coordinated and facilitated the whole process to ensure the
girl urgent medical help. The girl was admitted to RML Hospital next morning on 31 st December after a lot hard
work where she delivered a baby. The girl would have been dead if Shanti did not take matters in her own
hands.
Shanti wants to become a social worker after completing her education so that she can sensitize people towards
women’s respect and safety. She believes that every individual should behave responsibly towards the well-
being of humankind and think of one’s mental and psychological status before speaking ill of or maligning
someone.
Girls like Shanti show the reality of the society where people do not even distinguish between the victim and the
perpetrator. She proves herself by doing such small but impactful work that the culprit should be punished and
boycotted from the society, not the victim.
Yeh Ek Soch foundation salutes such work of young people and encourages them to do good work in life.