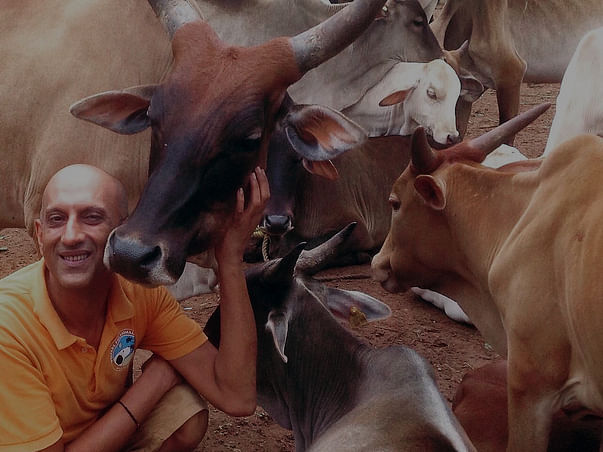 Share
Atul Sarin’s organisation, Welfare for Animals in Goa, or WAG as the organisation is popularly known as, aims to help as many cows in distress as they can. WAG’s main centre is located at Siolim village in North Goa. The number of cows and calves that meet you at the entrance gives the term “happy cows” a whole new meaning.

Educated to be a lawyer, Atul grew up in Kenya and the UK. He joined his parents successful business which was a couple of shops running in the UK and expanded them. After a successful but stressful life in the UK, he decided to spend a relaxed life after the age of 41 in 2001. He shifted to Goa to spend the rest of his life. In Goa, Atul bought an old house and started operating it as a guest house.


Soon Atul came across many stray cows on the streets which were hungry and distressed. Once, he saw a three-legged cow had blocked a road. A bus driver got down and pushed her out of the street. Atul saw that the cow fell into a gutter on the side of the street. He decided to bring the cow home and take care of her. He named her Tara and she was his first cow rescue. Soon, people came to Atul to ask for help to rescue other cows in distress. By the end of the first year, he had 10 cows. He decided to register a trust to better organize his efforts. He setup Welfare for Animals in Goa (WAG) where he and his team works tirelessly to rescue, love and rehabilitate as many cows as possible.

Cows are mostly left on the streets to fend for themselves. This makes them prone to vehicle accidents and as they are forced to forage for their own food, they scavenge through piles of rubbish eating anything from plastic to battery cells. WAG is the only shelter currently in North Goa providing medical aid & therapeutic care to injured & abused cattle. The shelter provides a safe haven for stray & abused cows, where they are fed a healthy, balanced diet mostly sourced from their own unique Cow Garden (where tree fodder is grown e.g. bananas), receive treatment and even get their coats brushed therapeutically. They have installed one of North Goa’s first bio-gas plants (where cow dung is converted to clean cooking fuel, which is used for cooking food for the beach dogs and other animals they look after). They are encouraging local villages and communities to do the same in order to alleviate the suffering that stray cattle endure. Stray cattle will thus no longer be seen as a hindrance by the locals.

Many cows have lost their babies, and are severely malnourished due to years of a bad diet, which includes plastic. In hot summer months, they require lots of clean drinking water, but instead are forced to drink from contaminated puddles which is mixed up with petrol and soap. They rescue them from various cruel scenarios, such as road accidents, ax & acid attacks, foot & mouth disease & many more. However, the good news, is that once they arrive at WAG, for the first time, they experience love & good food. They also adopt the orphan rescues, this is a joy to watch, as they can experience motherhood for the first time.
Atul’s team rescues almost 3 cows every day. Atul and his team has gained the experience and the know-how to treat and rehabilitate injured cows after working for 10 years. Currently there are 50-60 cows at the WAG shelter at Siolim. Once the cows get completely healed, they are sent to larger Goushalas where there is a lot of land and can be fed well. However, the bigger Goushalas lack the time and the expertise to treat injured cows.

Atul is struggling to bear the costs of running the organization and reach out to more cows in distress. Every day they have to feed 50-60 cows and and provide for the medicines and the treatment of the rescued cows. Your help will ensure that Atul can continue to rescue and rehabilitate more cows in distress on the streets of Goa.