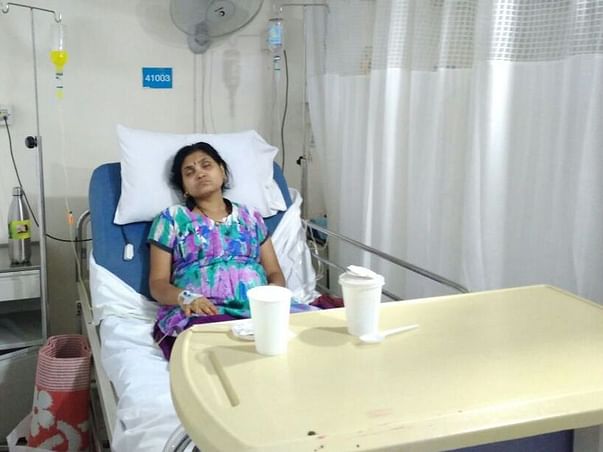 Khantesh is struggling to raise funds for is sick wife Veena Jadav, who is suffering from Lung Cancer.

Khantesh and his wife are originally from Dharwad ( Karnataka). Khantesh is tailor by profession which has made it difficult for him to arrange funds for his wife's cancer treatment.

Veena and Khantesh have been in a trauma throughout their life. Their two years old daughter suffered chicken pox who later developed some severe infection and they, unfortunately, lost her. While they were getting over this loss. They lost their son who had been on one day picnic with his friends and drowned in the water, while they lost him he was just 16 years old. Khantesh and Veena were still brave enough to come out of this trauma. But fate had something else in the store for them.


Veena was diagnosed with Lung Cancer.


Veena was initially suffering from breathing problem, it increased as days passed. So she underwent multiple tests in the town itself. After several months her situation worsened which forced us to approach a modern and equipped hospital where she was diagnosed with lung cancer. The hospital where she was getting treated they were unable to treat her as her condition is very critical. They had to shift her again to even a more equipped hospital.

Apparently, they came to Bangalore with the help of Dr.Sridhar P.S, Veena underwent further diagnosis. Currently, she is admitted in HCG Bangalore.

After several tests and scans, completely exhausting medical claim, they found out to her dismay that she not only has an advanced stage of lung cancer but it has also spread all over her body. As a tailor, in a family of three, with a meager lifestyle and net income which only keep them going from hand to month, is unable to support her treatment and medication costs.

Khantesh is all helpless now and struggling hard to arrange every single penny to save his wife.

We humbly request everyone to donate as much as you all can and provide her support in the fight against cancer.

Every little support will be greatly appreciated