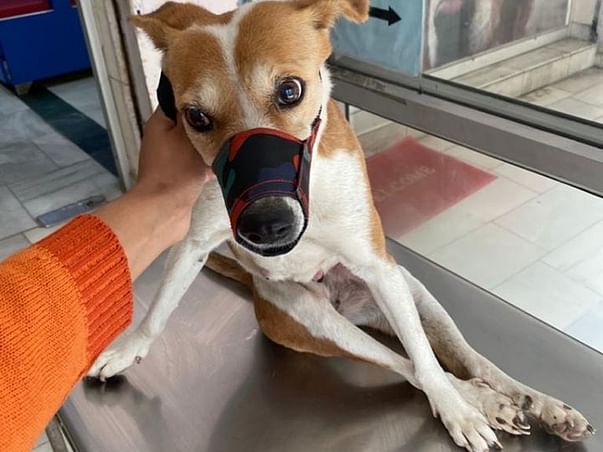 Can you imagine, being voiceless, hungry and hurt all at the same time? We cant even bear imagine that, but the stray dogs of our country live with it daily. I have seen the worst face of humans. Humans are bullies and like to dominate those who cant fight back. Stray dogs are one of them.
But the good part is, the kind humans also exist, those who fight for these voiceless beings.
I am a 24 years old Lawyer and an animal activist from Delhi. I have been rescuing and feeding animals from past 8 years. I rescue the dogs with special needs and were subjected to human cruelties.

I would like to write few words about some of my rescues:-

Romy
Distance from Noida to Meerut is 80 km. Veterinary facilities in Meerut are as good as nothing. Romy was rescued from the streets of Meerut. He was reported by a kind animal activist from Meerut. Romy's one leg was brutally chopped by some people, leaving him in pain. He hid himself for about 5 days and after those 5 days when he came out, he had no blood in his body and his wound was full of thousands of maggots. He was picked from there and was brought to Noida to a medical boarding. He was coma for initial 3 days of his treatment but he fought back and after 3-4months of his treatment, he went back to Meerut and got adopted by the same animal lover who reported him for the very first time. He came back from the dead when people were suggesting to euthanize him, he fought back.
Romy now:- https://m.facebook.com/story.php?story_fbid=103721348018543&id=100451881678823

Borriss
Borris was just a pup when we rescued him from the roads of Okhla. A careless bike rider ran his bike over his hind legs and broke both of his legs. He was rescued and taken care of and he as well fought back and now you can find him running with his siblings in his territory. It took almost 2 months for him to stand back on his legs.
Borriss now:- https://m.facebook.com/story.php?story_fbid=551582655467388&id=100018469748061

Kangaroo
Kangaroo was beaten with an iron rod. Both of his front legs were broken when we found him, he was a full grown dog and the ligaments of his leg was broken. It was very hard for him but he also recovered after about 40 days of treatment. He is also now back in his territory.
Kangaroo now:- https://m.facebook.com/story.php?story_fbid=551582655467388&id=100018469748061

Nishant
A black coloured senior dog, again beaten with an iron rod. Beatings were so severe that it paralysed his back. He received treatment and started walking again. He was old and hence was not sent back to his territory. He spent his last days peacefully and rested in peace forver.
https://m.facebook.com/story.php?story_fbid=554593198499667&id=100018469748061

Choti/Bhoori
How cruel humans can be? This cruel that they can shoot an innocent docile dog.
Choti was found in the outskirts of Meerut, her back was paralysed because there were three pellets in her body which damaged her nerves and left her paralysed.
https://m.facebook.com/story.php?story_fbid=536399103652410&id=100018469748061

These are few stories unheard stories. Stories of the helpless stray dogs of our country. All they need is a little love a little food and water and in return, you will get their loyalty for your entire life. But what we actually give them? Sufferings?
Please come forward and support my cause. Help me in getting these dogs treated.