This baby girl needs a heart surgery to survive | Milaap
This campaign has stopped and can no longer accept donations.

This baby girl needs a heart surgery to survive 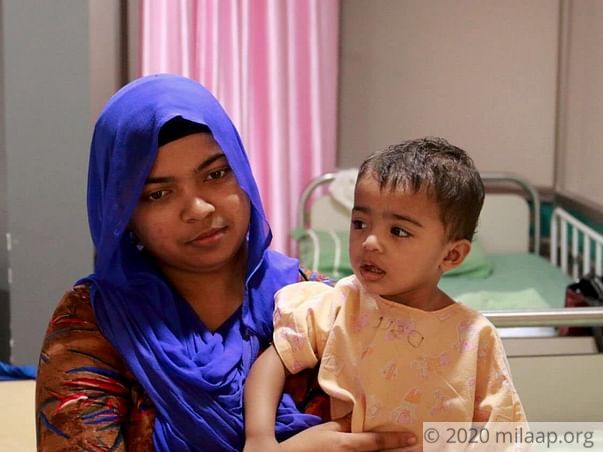 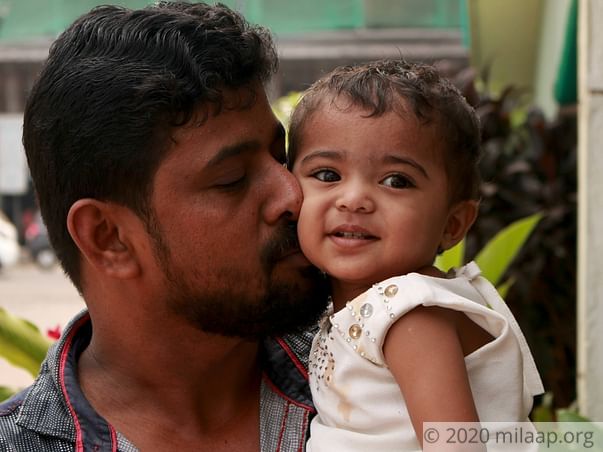 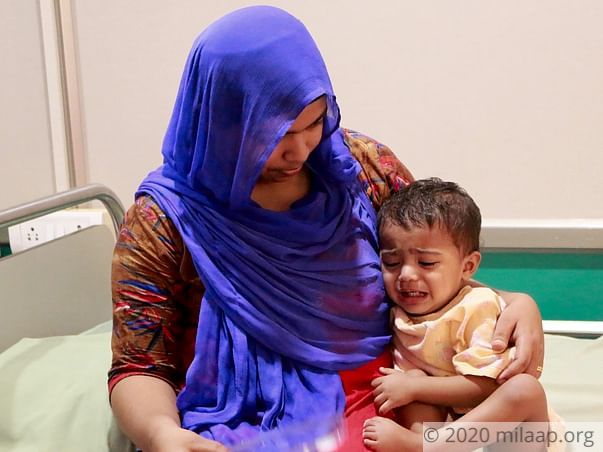 Previous Next
1-year old Thanha likes playing with her toys and exploring new things – just like any child her age. But sadly, she is not healthy like other children. Due to a rare heart defect, Thanha sometimes turns blue while she is playing and even loses consciousness all of a sudden.

A heart defect that was diagnosed too late

It all started when Thanha was only four months old. One day, after feeding, her mother Minnat noticed that her baby girl had turned blue in colour. She instantly knew in her heart that something was wrong.


“The baby was drinking milk when she suddenly became motionless. She even ran a high fever. I got really scared,” she says. But Thanha’s condition was not diagnosed right after that. It took many episodes of her becoming blue and losing consciousness for doctors to confirm the sad truth: Thanha had a hole in her heart along with multiple complications, and needed surgery at the earliest.

If Thanha walks, something bad might happen to her

It was only recently that Thanha took her first steps. But sometimes, when the enthusiastic baby walks, the same scary symptoms reappear. Her parents therefore do not encourage her to walk, lest she pass out and seriously hurt herself.


“Thanha is very tired most of the time. She wants to walk and go around the house, but I cannot let her. She is also a very poor eater. She is not able to eat nutritious food fit for a baby her age. All she eats is rice gruel, that too, very small amounts of it,” laments Minnat.

She is prone to all kinds of mishaps

Thanha also needs a lot of special care. “Once while she was playing, she fainted and hit her head on a sharp surface. A swelling formed on her head and she was crying uncontrollably. I had never seen her cry like that before. As her father, I could not stop my tears either. Why did this happen to my innocent child?” asks her father Hussainar, who works as a cook in a small eatery, adding, “She needs her mother with her all the time. She will throw a tantrum if her mother leaves her side. In this situation, we are forced to ask her mother’s sister to help out with the housework. We do not have any other option, but to plead people to help us out.”

The baby cannot find peace even in sleep

The nights are the worst for Thanha. She is not able to sleep like normal children and cries all the time. Her parents are devastated to see that their little angel cannot even catch a few hours of peaceful sleep. “She is very restless at night. The poor baby cannot even express what is going on because she has not started talking. The best she can do is cry and yell ‘Amma’ in pain,” says Minnat.

The couple has another child, Thalha, who is oblivious of the pain that her younger sibling and parents are going through. “Thalha is busy in her own world. For her, it’s all about playing and having fun. We are happy that she doesn’t know anything because at least one person in the family is not suffering then,” shares Hussainar.

Thanha needs a heart surgery to have a fighting chance at survival. Because her disease is rare, the surgery needs to be performed at the earliest. But her father Hussainar has no money left to pay for it. You can help Thanha get the treatment she deserves.
Estimation Letter 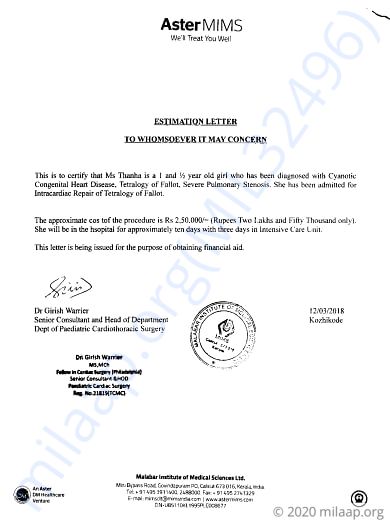 Baby Thanha got discharged and is on regular follow up. All her bills are settled and she is doing fine now.

There is a small balance amount pending which we are utilising for another baby in need - Baby of Janeesha - https://milaap.org/fundraisers/baby-of-janeesha . Janeesha's baby is suffering from a severe heart disease and needs our help.

Thank you once again for all your support. We could not have done this without you.

Thank you for your tremendous support. Thanha will be discharged today. We appreciate everyone's efforts, both in the form donations and prayers. The family was lucky to have so many of you coming forward to help them. Pre-discharge echocardiogram shows excellent results and she is now cheerful (although refusing to pose for photos).

The parents asked us to convey their deepest gratitude to everyone involved including the Milaap team and the donors.

Thanks for making this campaign a stupendous success. We were able to raise some additional funds from other sources and will be discharging the baby tomorrow. It was really amazing to see the fantastic response to help this dear child.

Report fundraiser
See how thousands are crowdfunding for their causes on Milaap
Rs.231,818 raised

I would like to receive the Tax reimbursement receipt.

I would like to receive the Tax reimbursement receipt.

A
You are sending a message to
A
Go back 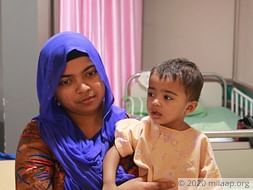 This baby girl needs a heart surgery to survive