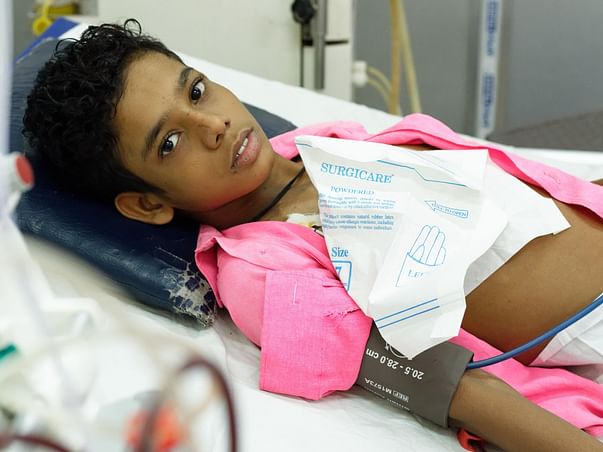 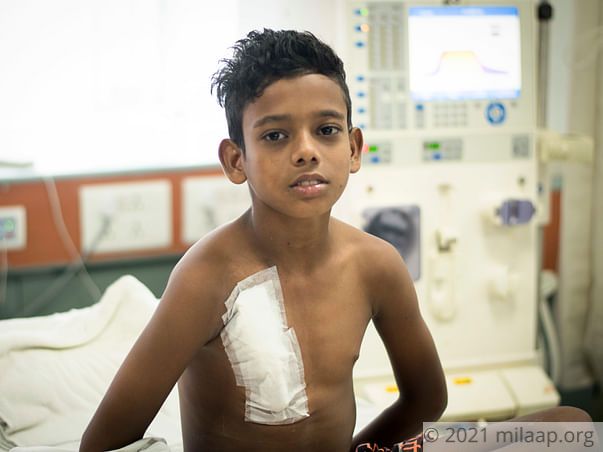 As a baby when Tarvez used to cry a lot, Parvez and Soni used to think those are merely hunger pangs. But it took them a month to realize that something is wrong with their baby because not only did he keep vomiting but his urine output was also very low. Since then, they have been carrying their month-old baby from one hospital to another only to find out that Tarvez's kidneys are not functioning normally.

"It has been 13 years since that day, and we are no closer to saving Tarvez's life. In fact, now we are losing this fight." - Soni

Even through the pain, Tarvez's smile is the only thing helping his parents fight to save his life

"As parents, we don't have words to describe how it feels to see Tarvez watch other kids of his age play outside. The doctors had told us not to let him do any intensive activity as he cannot drink much fluids and his blood pressure had to be maintained. We used to feel so guilty that we even stopped Sahil, Tarvez's elder brother, to go out and play. But one day when Sahil had a football match, Tarvez asked him to score two extra goals from his side. That was the day when I decided that I will not cry anymore and I will fight till my last breath to save my son and give him a childhood he deserves. But even though I am firm in my resolve, having no money is making me helpless." - Md. Parvez, father

Tarvez is such a happy child and performs so well in his exams. Despite missing classes due to his health, he still comes in the top ten of his class. Physically, he looks like a normal child but only his parents witness the pain and weakness he suffers during dialysis.

He has to be on a strict diet and cannot even have much water when he feels thirsty.

He never complains when he is given bland food to eat at this age because he does not want his parents to feel bad. It's been 13 years now since birth that he has been living his life on high dosage medicines and injections.

"During dialysis, I can only be near him for a few minutes as it can risk him of infections. I cannot even comfort my child when he is screaming in pain. All my tears have even dried up now." - Soni

Tarvez is surviving so far on medicines, and now even that isn't enough.

Tarvez has to undergo dialysis until he gets a kidney transplant. Unfortunately, his parents or immediate relatives are not the right match for him. Every day his condition is deteriorating.


"His bones have become so brittle that a few weeks ago his legs deformed in such a way that a surgery had to be done to cut a part of his bones by inserting steel inside, making him completely bed-ridden." - Parvez

Parvez and Soni got a ray of hope when they found a donor who was a right match but just before the transplant he backed out.

"The travel agency where I work as a peon is my only source of income. My boss has been sponsoring his dialysis sessions and I do not know if I will ever be able to repay him for his deeds. But the doctors have told that Tarvez has to undergo three dialysis sessions weekly instead of two now since his creatinine, urea, and potassium levels are not coming in control. Even though my boss has been like a miracle to us, I cannot expect him to help us forever when I am actually responsible for saving my son." - Md. Parvez, father

Parvez is worried that delaying the transplant will only make it that much harder to save his son. Your support will end 13 years of suffering and help gift Tarvez a new life.