14-Year-Old's Rare Disease Has Left Her Completely Bedridden | Milaap
This campaign has stopped and can no longer accept donations. 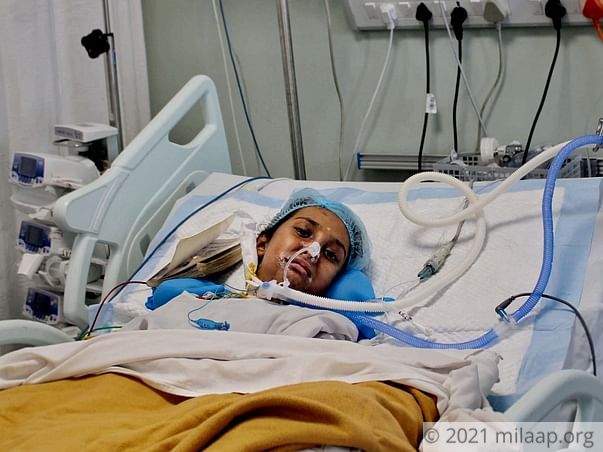 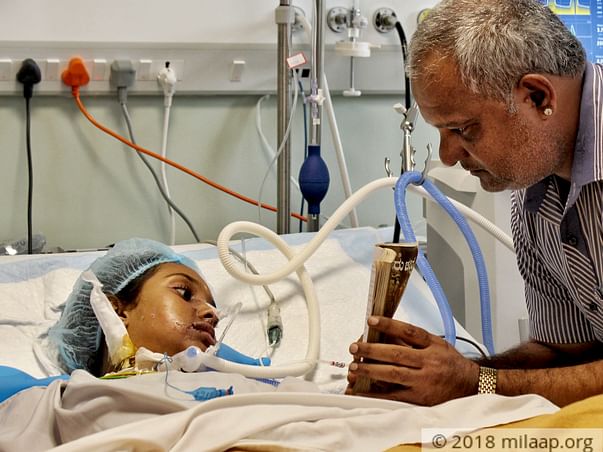 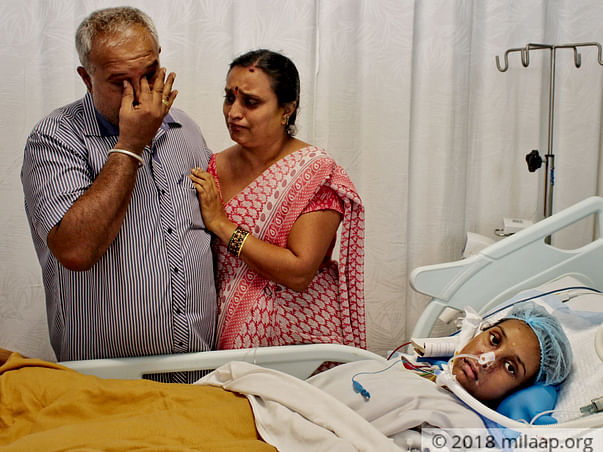 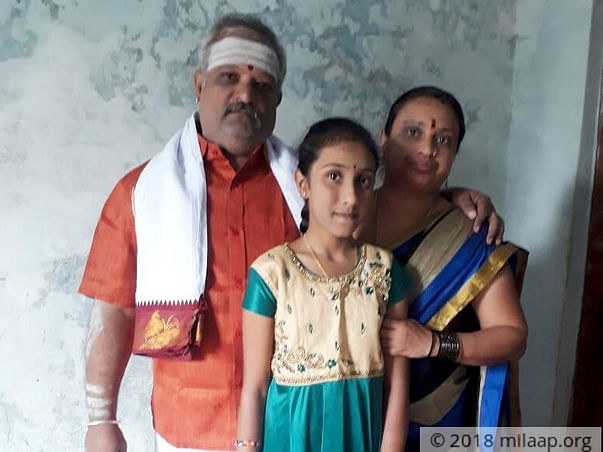 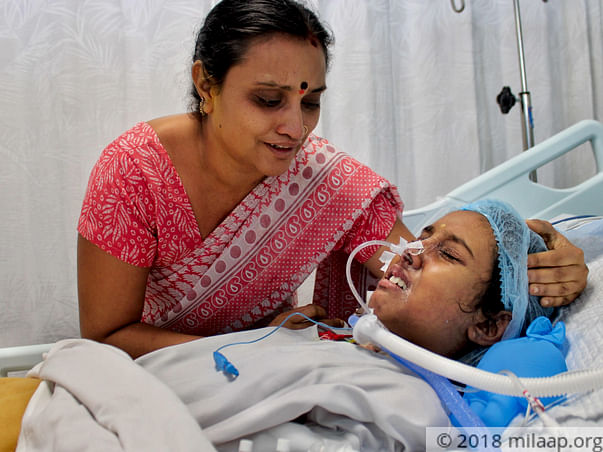 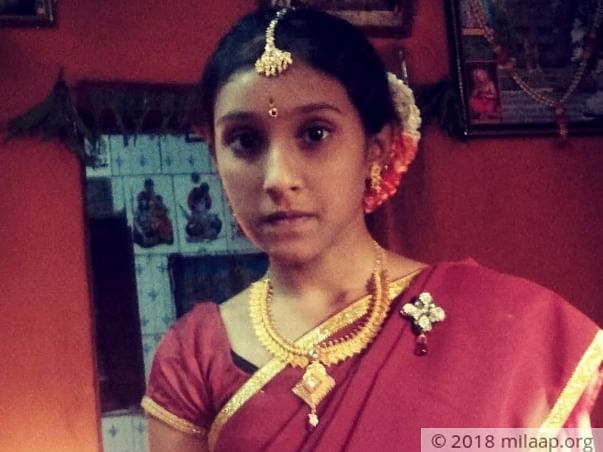 "My daughter, Sushma reads as I hold her favourite book. It’s the only thing that gives her some solace. The books are the only thing that takes her away from reality. She forgets her pain, forgets that she cannot move her hands to wipe her own tears. She wanted to be in the college as a lecturer. Now she is in the hospital surrounded by beeping machines. I still can't believe that life can be so harsh." - Srinivas, 14-year-old Sushma's father.

This ambitious teenager is on the brink of death

14-year-old Sushma is an ambitious young girl who dreams to be a lecturer one day. She is so driven by her aim that she never missed attending her school even when she is sick. Her aspirations have come to halt when she severely fell ill a month and a half ago.

"My daughter suddenly complained of high fever and swelling on her face. A day before, she danced and sang on an occasion. So we thought the activities strained her. But after a couple of days, her hands and legs were completely swollen and rashes were beginning to show up. On the way to the hospital, she fell unconscious. We quickly consulted the doctor who told that she is very critical and fighting for her life with a rare disease that is affecting major parts of her body. We were shocked and did not know what to do. But all we understood was that there was very less time left to save her, so we immediately admitted her in ICU." - Sujatha, Sushma's mother.

Sushma is suffering from Juvenile dermatomyositis which is a rare autoimmune disorder, where the immune system attacks blood vessels throughout the body causing muscle inflammation. There's no exact cause or reason for occurence of this disease. This disease has also severely affected her respiratory system, lungs, and kidney. She urgently needs dialysis, multiple steroids, and blood transfusions, without which she may not survive long. She needs to continue her ICU admission for 4 weeks as stay outside ICU may cause infections.


Sushma has been on ventilator support for more than a month. But the infection in her lungs no longer allowed her to depend on mechanical ventilation so she had to undergo a tracheostomy surgery. Now she has an opening in her neck where a tube is placed to allow air in her lungs.

"Her life in the hospital is very challenging, my husband got her favorite books as a much-needed distraction. Sometimes, she suddenly weeps and I know that she is missing her hobbies." - Sujatha.

This priest who earns Rs 100 a day, cannot save his daughter without help

Srinivas is a priest in a temple and is the sole breadwinner of the family. He barely earns Rs 100 a day and with this little money, he strives to feed the family. He left no stone unturned to save his daughter. With nothing to call his own to sell, he borrowed a huge sum of money on interest. So far, he has spent 7 lakhs till now and is neck-deep in debt. He is unable to afford the treatment that can save his daughter.

Sushma with her parents before the diagnosis

"Every evening, my husband and I used to have conversations about our daughter's aspirations to teach and how we can support her. But now, we sit in the hospital and think how we can save our child from death. We had a lot of dreams and plans for her future but now if she just breaths properly and stands on her feet is more than enough for us. But the treatment which can save her is very expensive, it costs 14 lakhs and we cannot afford it," says Sujatha with teary eyes.

"My daughter had a lot of dreams but she is now stuck in one position for more than a month. Her entire body is badly marred with rashes and her organs are failing. She struggles to even utter 'amma' when she needs anything. Though she cannot talk, I know as a mother that my daughter is in grave pain when she tightly shuts her eyes and silently weeps"  - Sujatha.

Srinivas and Sujatha are waiting to hear their daughter call them 'appa', 'amma'. She is suffering from severe muscle weakness. Because muscles support kidney, respiratory system and lungs, all her organs are gravely affected. She also has difficulty in breathing and her skin is covered with rashes. She urgently needs dialysis and ICU support to survive. Her poor parents have tried everything they could and are unable to support her.

Your kind contribution can save Sushma 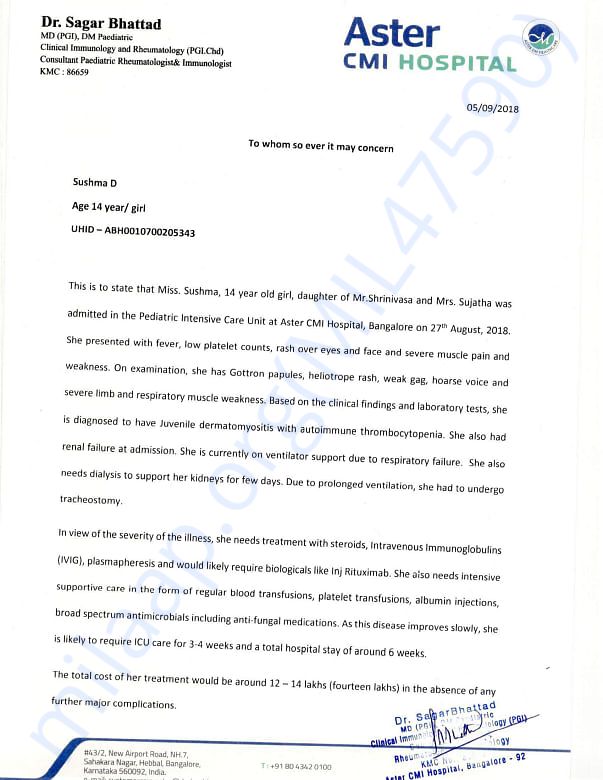 Sushma is going great and is at home presently. This wouldn't have been possible without your love and blessings. We would like to thank each one of you for coming forward and saving our child.
Thank you once again.

Sushma is currently at home and is doing ok. She is recovering and responding to the treatment. She visits hospital for regular follow ups in physiotherapy.

Here's a quick update on Sushma. Sushma is off tracheostomy and tube feeding. She is now eating , drinking and walking normal. She is doing well and recovering slowly.

Thank you once again for your love and support.

Scan & donate with any app
check_circle_outline Download payment receipt
Report fundraiser
Know someone in need of funds for a medical emergency? Refer to us
Rs.2,563,421 raised

1167 Supporters expand_more
This campaign has stopped and can no longer accept donations.
$150 Million +
Raised on Milaap
Are you in need of financial support for medical or personal emergencies, or a social cause?
Start a fundraiser
Or
Know someone in need of funds for a medical emergency? Refer to us
Campaign organizer contact_mail

My wishes for Her speedy recovery

My wishes for Her speedy recovery 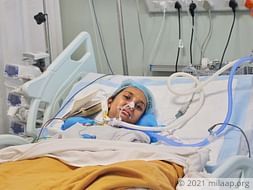