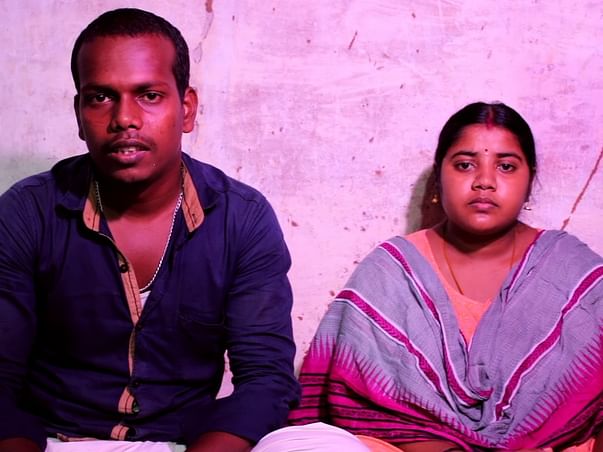 'I dreamed of living a normal life until the tragedy stuck us' shares Bharathi who is from Avanam, Peruvurani Taluk in Tanjavur district. Having been in love from school years, he has seen his wife Suriya being active like any other girl of her age until once she fell while boarding the bus to college. They assumed it could be weakness and had some basic medicines and things seemed fine for a while. But within a span of two years there were difficulties with simple everyday tasks like sitting and standing; eventually she could not anything much and that was when she was diagnosed with Myotonic Dystrophy which is a long-term genetic disorder that affects muscle functioning. There is no proper cure or medication for this disease yet and symptoms were visible only after the disease spread whole of her body affecting most of her muscles functioning. Surya was admitted in Tanjavur Medical college for 28 days but no treatment were provided that is when Bharathi heard that the best treatment was available in JIPMER and took her there. Tests were done and they not just confirmed the disease but also shared that Surya might survive for only next five years only. This shattered them both completely and helpless Bharathi took her for some Kattu Vaidium (bandage remedies) in Tirunellveli which did help her a bit. With Surya having not much family support, it was Bharathi who decided to be with her and take care of her and ended up marrying her with support from his villagers while his own family were against it. He could not take up regular job since he wanted to be with her so he just ran a small shop nearby and spent most time taking care of his wife. In the hope that having child might help cure her better with the stem cells treatment and after confirming that the baby will not be affected by the genetic disease, they decided to have a child and with much difficulty had a baby girl.
Presently Bharathi does continue to provide treatment to his beloved wife like Physiotherapy but he is not too sure what might help his wife recover from this ailment and is worried since her health is deteriorating day by day. Surya says she wants to live for her child and her loving husband and hopeful to seek support from others in extending her years of her life.
Both Bharathi and Surya are very worried about their uncertain future and are still hopeful about seeking support from people in seeking support in finding useful places for treatments or alternative medications that might help and also support in the treatment costs during this difficult time.