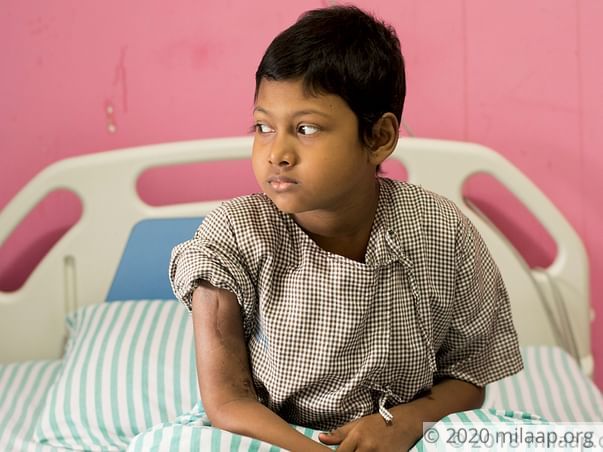 "My 9-year-old daughter, Sumaiya has cancer. I was scared when I heard the doctor say ‘Your daughter will not survive beyond 3 months without treatment.’ When we started her treatment, I didn't imagine a child her age to be so brave. She was the one who gave me the strength to not give up despite struggling everyday to support her treatment. But despite fighting bravely for 2 years, the cancerous tumor continues to threaten her life," - Samina, Sumaiya's mother.

Sumaiya lived in a small district of Bankra, West Bengal with her parents. The little girl has always aspired to be a teacher. Whenever Samina left her alone for a while, she would start scribbling on the walls, pretending to be a teacher. Two years ago, she developed a bad swelling on her right shoulder. She couldn't even lift her hand and was struggling to even eat.

"She kept telling me that her shoulder was hurting. I didn’t pay much attention until one day I saw a huge swelling on her right shoulder joint. It was so huge that it could easily have been mistaken as a separate organ attached to her shoulder."- Samina

Samina and Sarif took her to several doctors. While some doctors said the swelling could due to some injury, others suspected a tumor. After several tests, doctors finally confirmed that Sumaiya has developed a bone tumour called metastatic PNET (primitive neuroectodermal tumor) and it can kill her if left untreated.

‘Ma, if I can’t hold a chalk or a marker, how will I become a teacher?’, asks poor Sumaiya

After 2 years of intensive chemotherapy, just when her parents thought that their daughter is cured, the tumour came back worse than before. Her shoulder begun swelling again. Even if she would mistakenly turn towards her right side while sleeping, she would shriek in pain. Samina doesn't know how many sleepless nights she has spent so far to comfort her daughter.

“My daughter still hasn’t got used to using her left hand. She often tells me, ‘Ma, if I can’t hold a chalk or a marker, how will I ever become a teacher?’ I don’t know how to answer her innocent question. She keeps asking me to read to her so that when she goes back to school, she is not behind others. I can’t tell her that I am not sure if she can ever go back to school.”- Samina

Sumaiya’s father, Sarif does odd jobs in his locality for daily wage. For the past few years, he has been suffering from health issues including a severe eye problem due to which he can’t work much. He earns a maximum of Rs 1000 a month. Sarif and Samina were already begging and borrowing to feed their children.

“We have already spent over Rs 10 lakhs to keep our daughter alive. Arranging another Rs 4 lakhs for her chemotherapy is impossible for us. I stay alive hoping that one day my children will overcome all poverty and do something great. Now I am on the verge of losing my daughter.Time is running out and without help, I will be forced to stop her treatment. -Sarif

9-year-old Sumaiya is suffering from a deadly bone tumor that will kill her without prolonged chemotherapy. To keep her alive, her parents have spent everything in the past 4 years. Her father is in so much debt that it is impossible for him to afford her treatment now.

Your support will help Sumaiya live

UPI: rzpy.givetomlpmisssuma001@hdfcbank (Copy to clipboard)
Or
Click here to read the instructions before you make a bank transfer. 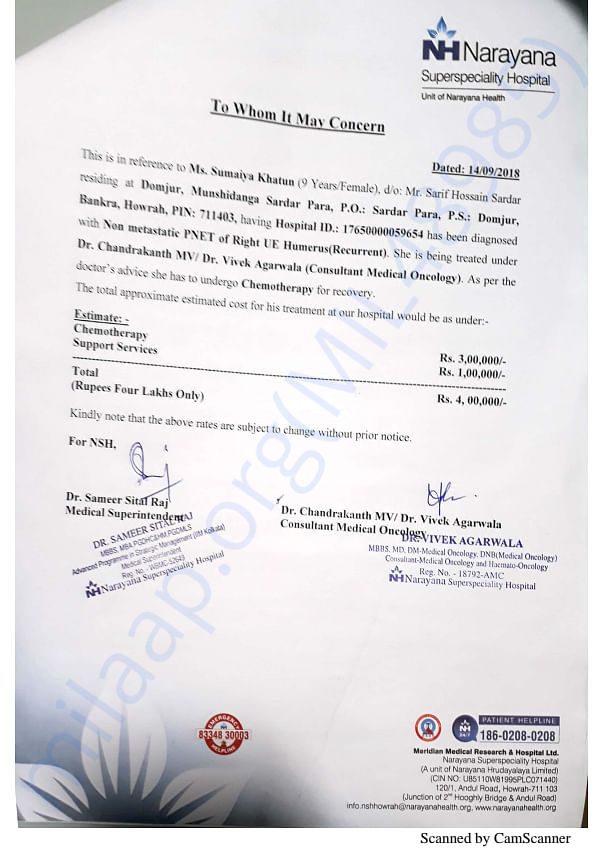 UPI: rzpy.givetomlpmisssuma001@hdfcbank (Copy to clipboard)
Or
Click here to read the instructions before you make a bank transfer.

We would like to apologize for the miscommunication in an email you must have received earlier. As informed on 29th July 2019 , Sumaiya is no more with us. Sumaiya was undergoing her treatment but her health deteriorated and she couldn't make it.

We sincerely apologize for the miscommunication.  We will make sure such a miss will not happen from our end in the future.

Regards
Team Milaap
The below update was incorrectly posted. We sincerely apologize for the over sight. Kindly ignore the below information.

Here is a quick update on Sumaiya. She came to the hospital for consultation and for her radiation. We will keep you posted on her health.

Thanks for all the support. Please continue to pray for her.

Sumaiya is no more with us. Sumaiya was undergoing her treatment but her health deteriorated and she couldn't make it.

Funds raised has been utilized to clear her medical expenses.

Thank you for all the support.

Report fundraiser
See how thousands are crowdfunding for their causes on Milaap
Rs.220,389 raised 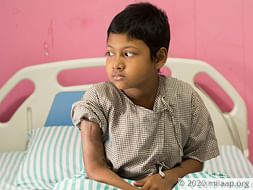