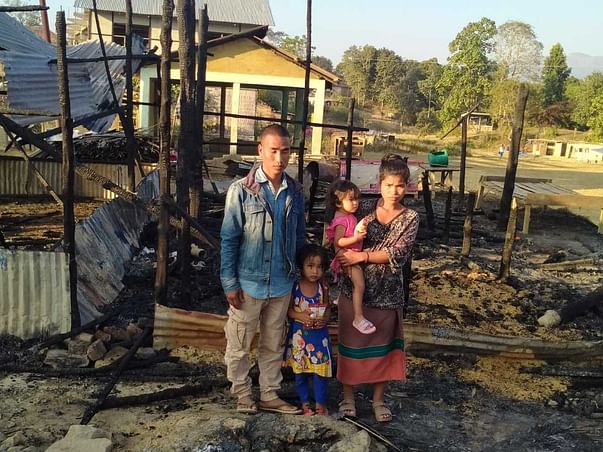 Share
In Betbonye (Longpuighat), misfortune has struck the family of Sujit Chakma on the 26th of January, 2021. When his house was being consumed by fire, he and his wife went out to remove the husk from their newly harvested paddy. After someone phoned him about the fire, he immediately rushed to save his home. He was mainly concerned for his two young daughters at home. It was just a few months ago that one of them had to undergo medical treatment at a hospital in Lunglei. The fire didn't harm anyone, but he lost his house. He recently spent his earnings to build a portion of his house with bamboo and thatch. The fire also damaged the printer, laptop, and items that he needed to run his small Customer Service Point at his residence.

Thanks to the local NGOs and volunteers like YCA, they are temporarily lodged in a makeshift camp. Human life is full of ups and downs. It is at times of adversity that we need the compassion of others. Like most people from our rural areas, he has no major savings or any fire insurance claim. At a time when everything seems to be against Dangu Sujit, let us encourage him to start a fresh life. Our empathy and well wishes can make a difference in his life. You can donate whatever amount to rebuild his life. Every rupee is valuable.