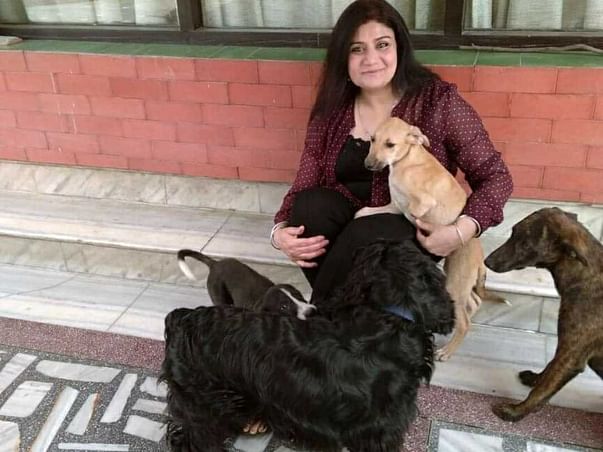 Stray Animals are perhaps the most despised animals in our society. Nobody, well almost nobody, wants them around. They die of hunger, malnutrition, untreated illnesses, road accidents, and many times even brutally killed by humans.

In this otherwise dark world of stray/homeless animals, there are few bright spots. There are individuals who have stood up for the rights of the Animals.
Meet Puja Bahukhandi, an inspiring Animal Rights Activist from Uttarakhand.
Her Grandfather a Forest Officer and her father a Vet, Puja spent a significant part of her childhood in Jungles amongst the Animals.
The compassion and love for animals had been an integral part of her upbringing.

Quite early in her life, Puja had noticed that the stray animals in the cities were living a pathetic life.
People had nothing but scorn for the strays.
As a result, they were severely malnourished and distressed.
As a young girl, Puja along with her father would go out and feed the strays in their locality.
Sometimes she would even eat less so that the extra food can be used to feed an additional stray.
Puja's commitment to the cause of animals grew stronger with time.
By the time she completed her studies, she had become a well-known face among animal lovers. She acquired a handful of degrees - B.A, B.Ed, M.A.

Her to-be husband's family got a glimpse of her unflinching love for Animals when they witnessed her pets taking part in her wedding ceremony and were even circling around the holy fire alongside the couple!

With a very supportive husband by her side, Puja Bahukhandi continued moving ahead on her chosen path.

The number of stray dogs increases rapidly as their reproduction rate is very high. Puja along with her friend were the first ones in Uttarakhand to initiate a program known as ABC, short for Animal Birth Control. Every day she would take few stray dogs to the doctors for sterilization. This helped in controlling the population of the strays.

Apart from this, Puja had been the founder trustee of RAAHAT, an Animal shelter home/hospital in Dehradun.
Currently, she holds the post of Vice President of the Society for Prevention of Cruelty to Animals (SPCA), Uttarakhand Chapter.
Puja Bahukhandi has set up an NGO called SAMARPAN, which aims to work for the Underprivileged,  Animals Rights  and protection of the Environment
Over the years, Puja has personally rescued hundreds of animals who were in distress.
She regularly brings home Injured or Sick stray Dogs to nurse them. As a result, there are always plenty of dogs at her home.
She continues to feed hundreds of dogs twice a day,  in various localities of Dehradun.
During the Covid outbreak, she would cook food for the affected families and then deliver it personally to them. She often ends up working until well past midnight.
The more you do, the more you realize that more is to be done.
In her fifties now, far from slowing down, Puja is now aiming to set up JAADU COMMUNITY KITCHEN, named after her first-ever pet,
this community kitchen will be set up in different localities of the town where food will be prepared and distributed to strays of those areas.
Sheer determination has brought Puja so far. She has never asked for donations all her life. Needless to say, the family has spent their entire lifetime earnings for the cause of society.

The time has come for each one of us to stand up in Support of Puja Bahukhandi. It's not her cause alone...It's our cause.
On behalf of Team Puja, we appeal to all of you to come forward and contribute generously to this fundraiser.
It's time to show our love and understanding for the strays in our society.
It's time to acknowledge that strays have the right to live with dignity.
Let's Come forward to support the underprivileged.
Let's Support Puja Bahukhandi.
Let's Support Jaadu Community Kitchen.
We intend to spend the funds in the following manner :
1. 500 Stray Animals to be fed every day @ ₹30 per Animal per day = ₹4,50,000 per month.
2. Cooks x 4 @ ₹10,000 per month = ₹40,000 per month
3. Feeding Staff x 4 = ₹40,000 per month.
4.Medical for Sick / Injured Animals = ₹25,000 per month
5.Delivery vehicles' fuel and maintenance: ₹50,000 per month.
Total = ₹6,05,000 per month.