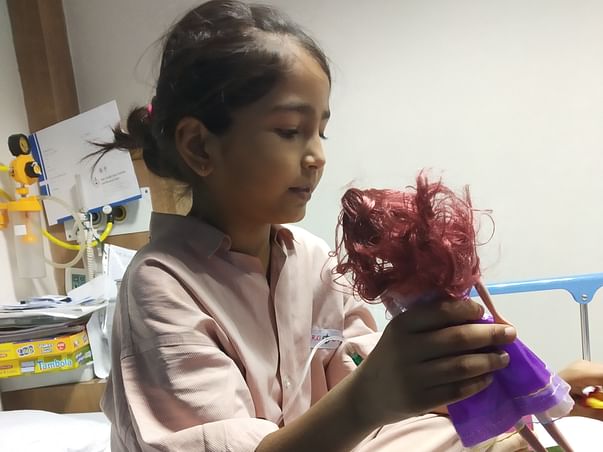 I want to go home and play with duggu. Somya pleads with me to take her home so that she can meet her younger brother. she asks me why they have put her through such painful treatments. I have told her that this treatment will help her recover from her fever. I don’t know how to tell her that she actually has cancer and her coming home depends on how well her treatment goes.
Somya was so energetic. One day in January she’s practicing her dance competition at school. when she’s come back to home sudden she’s started shiver and felt tired. My wife  touched her forehead. It was extremely hot. A visit to the doctor told us that our daughter had contracted a fever. Somya’s fever did not decrease and she began complaining of stomach pain and refused to eat food. Red spots formed on her skin and she’s felt very weak then doctor suggested a blood test and we have admitted to Shanti Gopal hospital Indirapuram Ghaziabad. Her treatment was going around from one week on this hospital. Suddenly they refer to the Rajeev Gandhi hospital. When I asked why .then he told that her symptoms like cancer and suggested a blood test born marrow.
Immediately we have admitted to her Rajeev Gandhi Cancer hospital. We immediately followed his advice. A few days later the doctors informed us that Somya had Acute Lymphoblastic Leukemia (ALL) and would need to undergo 8 months of intensive chemotherapy sessions which would be followed by 2 and a half years of maintenance chemotherapy. When she heard the words ‘cancer’ my wife became unconscious.
Somya doesn’t even smile anymore, she gets so scared at the sight of the needles during the chemotherapy sessions, that she bursts into tears. All we can do is comfort her and assure her that everything will be alright. It requires a massive effort on her part to just sit up in bed. My daughter is struggling to move.
The cost of the treatment would be approximately  8,00,000.
Somya has been so brave and has faced chemotherapy sessions for the last 1 months. Without your support, we will not be able to pay for her treatment anymore. she will not be able to recover. You can ensure that this does not happen. Help our daughter continue receiving chemotherapy so that he can get better.