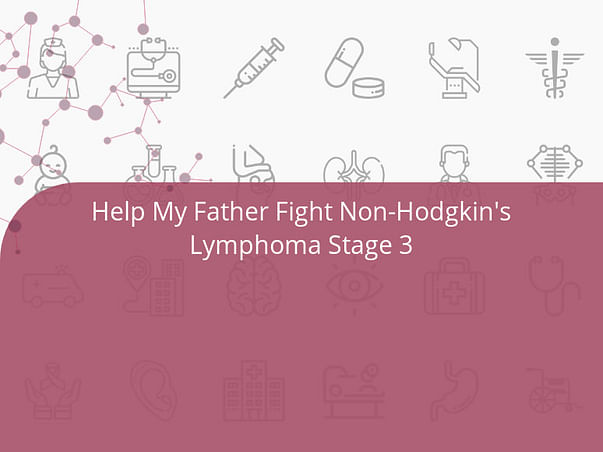 My name is Hemanth Vadlamani and I am here to fundraise for my father, Sidda Murthy Vadlamani.

He is 65 years old and is residing in Chennai, Tamil Nadu. He has been diagnosed with Non-hodgkin's lymphoma. But he needs medical treatment to fully recover. Which will cost around Rs.200,000.00.

He was first diagnoised with Non Hodgkins Lymphoma Stage 4B in the year 2008. As we know it's an expensive disease, we couldn't afford to get him treated in private hospitals. However, They were no way helpful to us in any means in regards to the charges for the treatment. We used to live in Bangalore by then and shifted our base to Nellore, AP which is our native as dad was the only person who was a bread winner for the entire family and he couldn't continue persuing his job. Later, he was suggested to go through Chemotheraphy of 8 cycles in a span of 1 year from 2008 to 2009, which costed us around 5lakhs. We were able to get him treated with a lot of difficulty with financial support from dad's friends. With the almighty's grace he was able to fight it. Post the Chemo, he was suggested to conusult the doctors once in every 3 months. He was able to follow-up for a few years. However, gave up on follow-up after a few years due to financial crisis. Post that, Lately dad started to feel that disease has re-occured as he started to loose weight with a lot of complications to health. We somehow managed to take him to the cancer institute again, for our dismay he was again diagnoised with the same disease 3rd stage. Initially it was the 4th B stage. He was again suggested with 6 cycles of Chemotheraphy in the year 2018, which will cost a bomb. We lost hopes as we know we can not afford anymore for any further treatments. It's purely luck n god's grace that, we had someone to support and to lean on and we were able to get him treated again which costed us close to 7lakhs. After the treatment, as per the procedure he was asked to take a PET scan, which will show the development and how's reacting to the treatment. Doctors said, he has been responding very well for the treatment. However, still needs to go through some treatmemt which is not a Chemo but a few injections which has to be given once in 3 months for another 2 years. We literally begged n pleaded the Cancer Institute's management to consider our financial situation and help us with reducing the charges for the treatment. However, they were just stone hearted. It is estimated to cost us 2lakhs. First injection is scheduled on 11th November, 2019. We are unable to do anything at the moment but just weep over it. Hence, Im sincerely requesting to help me to save my dad fight cancer

Please come forward to help me save my father. Any contribution will immensely help my family. I need your support to bring him home. Do contribute and share this campaign link with your friends and family.