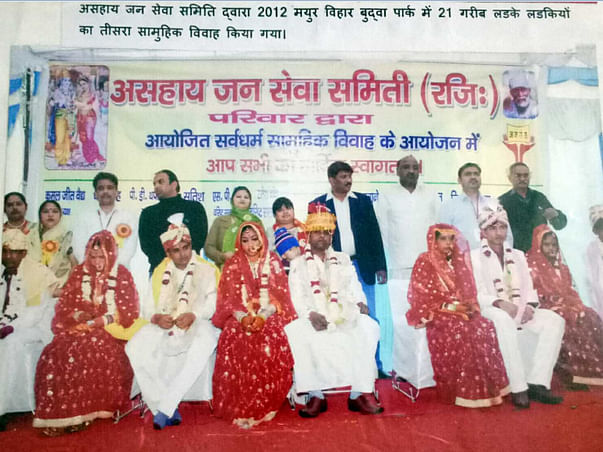 In 2009, Shree Satish Vaid, started organizing community marriage events for the couples from underprivileged families. This year it will be 10th Samuhik Vivah function and will be organized in Trilokpuri area of New Delhi on 17th February 2019. 35 couples from poor families will get married on in presence of their families.

Shree Satish Vaid and his team plan each even meticulously budgeting for expenses that are required for the ceremony as well as marriage gifts for the couples, bedding, gifts such as kitchen utensils, sewing machines, 5 pair of clothes for every bride. The funding is arranged in advance by Shri Vaid from own as well as donations from various well-wishers.
However, due to an increase in the number of participating couples this year and last minute back out by some supporters, Shri Satish Vaid has run into a shortfall of rupees four lakh. As the date has been announced to the families, Satish Vaid ji does not want to postpone the marriage and has made this SOS appeal to donors for money using crowd funding.

The goal of this campaign is to raise INR 4 lakh towards marriage expense so that the couples can be married with no financial burden to them. We request you to bless these young couples with your generous donations so that Shri Vaid can organize their marriage event without worrying about the finances.