Daily wage Laborer fighting to save his son's life | Milaap

Daily wage Laborer fighting to save his son's life 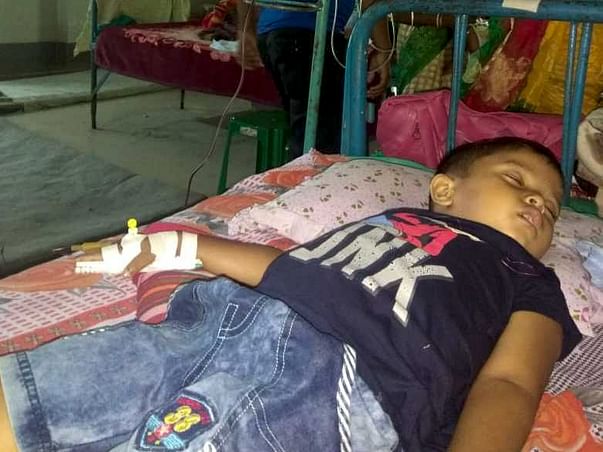 In dawaguri part-2, a child, Shoaib Maqsood (4 year, 8 months) suffers from an inherited blood disorder called “Beta Thalassemia”. Due to this disorder, their bodies make an abnormal form of hemoglobin. The father of the children, Saiful Hoque (32years), a daily wage laborer, it breaks my heart to see my child degraded health. The child was diagnosed with the disease when he was four months old. Since then, he has to be taken to the hospital twice a month for the blood transfusion process.

"Beta Thalassemia" Report
At the time of blood transfusion on 30/04/2019 at Alipurduar Hospital, WB

The lack of hemoglobin due to the disorder, which is the protein molecule in ‘red blood cells’ that carries oxygen, causes poor growth, impaired physical activities, facial and other bone deformities, fragile bones and enlargement of the liver and spleen. A cure does exist for this disorder, but it comes at a cost that i cannot afford. Doctors have recommended that the children get a ‘Bone Marrow Transplant (BMT)’ which can save the children from a lifetime of painful blood transfusions. The doctors have said he needs BMT, available at Apollo Hospitals and other hospitals at Chennai, New Delhi, Hyderabad, Ahmedabad and Kolkata. The surgery will replace damaged bone marrow with healthy stem cells and enable the children to live a normal and healthy life. This procedure costs around Rs. 22 lakhs to 25 lakhs and he takes care of my children who suffer from this disorder.
Hospital estimate letter

“A single blood transfusion for a child costs us Rs. 2,200, which he now need twice a month and this is excluding medicines. So far, we have spent lots of money and gathering this amount wasn’t easy for our family.
Prescription for Blood Transfusion for Shoaib

Earlier we had a small medical shop near our home after the 2012 ethnic Riots between Bodo and Muslim in BTAD, Kokrajhar, Assam, India, but it and my house has been totally burn by the extremist. From that time my income source had shutdown. Nowadays I am a daily wage laborer and it is quite impossible for me to bear my children’s treatments expensive. For which we had approached some projects introduced by Guwahati Medical College and Hospital (GMCH), Assam, India however; we were disappointed by the behavior of the authorities of GMCH and couldn’t “draw our attention.”Guwahati Medical College and Hospital Prescription for Shoaib

In addition, a lot of organizations visited our home but contributed nothing but their sympathies. On 1st April, 2019 we had also seek the government support through the ‘Guwahati plus electronics daily news’ [https://www.guwahatiplus.com/daily-news/rare-blood-disorder-plagues-family-in-rural-assam-seeks-government-support?fbclid=IwAR3o_hhYVAuMnAOtu1AQUhoSh8bd2m-Hw9H-b_9YPLPw_uMf2p2p1f2RkYU], but we did not get any response from Assam government. Thus, now we are appealing to the public globally for help for save our child.
Patient and his Father in front of his Home

UPI: rzpy.givetomlpsaifulho001@hdfcbank (Copy to clipboard)
Or
Click here to read the instructions before you make a bank transfer. 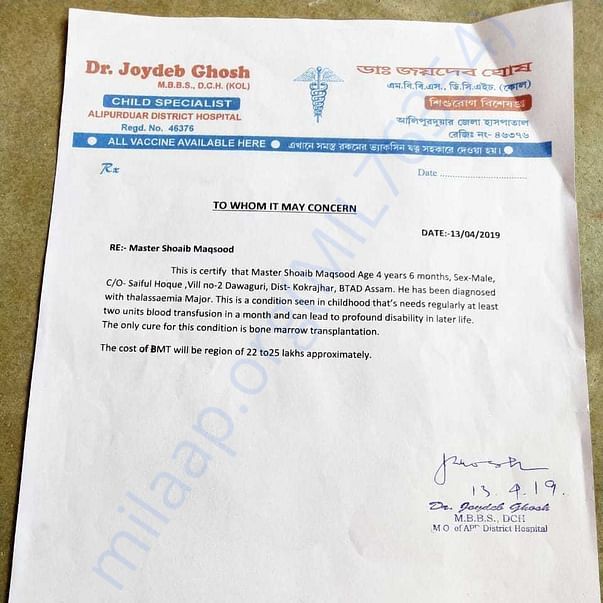 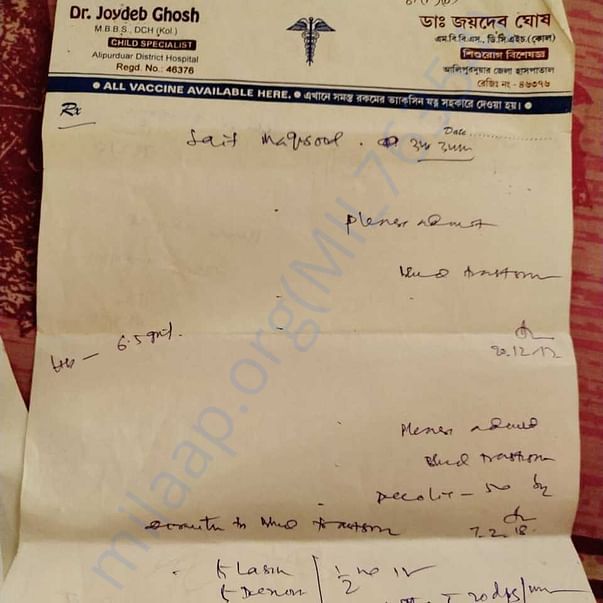 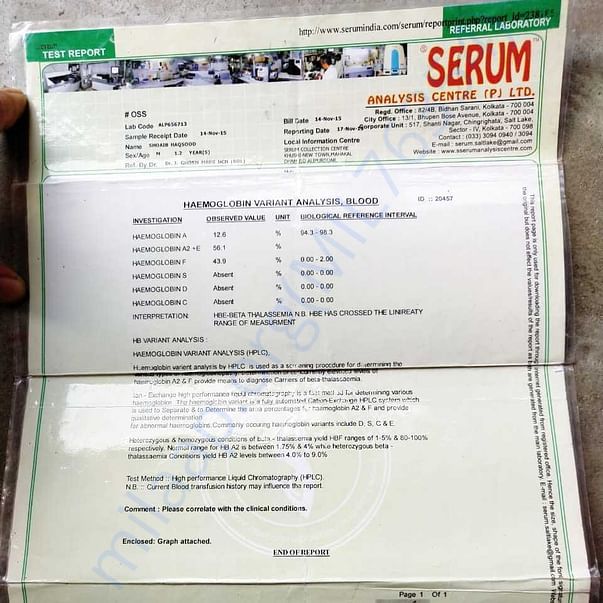 UPI: rzpy.givetomlpsaifulho001@hdfcbank (Copy to clipboard)
Or
Click here to read the instructions before you make a bank transfer.

Thank you for all your support. Shoaib is doing well and his operation is going to be scheduled once his health gets better.

Please continue supporting him as we wish him a speedy recovery. Will keep you posted.

Regards,
Tasher Ali
Donate
Report fundraiser
See how thousands are crowdfunding for their causes on Milaap
Content Disclaimer: The information and opinions, expressed in this fundraiser page are those of the campaign organiser or users, and not Milaap.
If such claims are found to be not true, Milaap, in its sole discretion, has the right to stop the fundraiser, and refund donations to respective donors.

Every one please donate some amount for this Child

Every please donate some amount for this child

Every one please donate some amount for this Child

Every please donate some amount for this child

You are sending a message to
Tasher Ali Sheikh
Go back 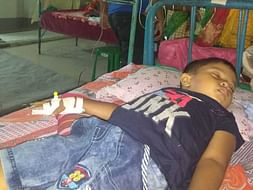 Daily wage Laborer fighting to save his son's life