Shoaib is suffering from severe seizures in the ICU and needs help | Milaap
This campaign has stopped and can no longer accept donations. 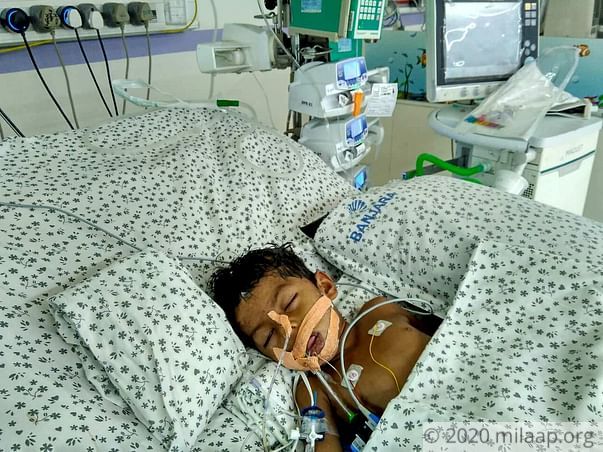 “He was a very active kid, we never imagines, he would fall this sick.”

Mohammed Shoaib has a rare neurological condition, that causes him to suffer seizures. He’s almost 3 years old and was perfectly healthy before this started. Last month, suddenly, Shoaib started having seizures that just didn't stop. His terrified parents Samina and Mehboob rushed him to a doctor. The doctor suspected something major and referred them to Rainbow hospital, Hyderabad. Shoaib was immediately admitted to the PICU and has been there since then.

Shoaib is not the same happy, active child anymore. He lies unconscious on the hospital bed

Shoaib used to be a very cheerful and active kid. Until a week before his seizures started, he didn’t have any health complaints either. On January 24, he got a high fever that did not subside despite medication. He looked like he was doing better. The night before he had his first seizure, he was in comparatively better spirits, playing with his elder sister Mubashira, and taking rounds on his prized cycle. The next morning, he suddenly started having violent seizures.


“Medicines are not working on him. He’s on ventilator support and kept unconscious so he does not rip wires off his body during his seizures. It’s heartbreaking to see our little boy like this.”

All the medication he’s been given for the seizures have not worked and Shoaib continues to experience violent seizures. His fever is also not getting better. He is kept unconscious so he doesn’t accidentally rip off any of the wires on his body during one of his seizures. He is also been constantly on the ventilator from the moment he was admitted. For someone that small, it is a devastating state to be in.

Money is the biggest hindrance in treating Shoaib

In order to recover from this nightmare, he needs a prolonged stay in the PICU, constant monitoring and intensive treatment. For Shoaib’s parents, it’s next to impossible to pay for these mounting medical expenses.


“We’re from a financially poor background. We have no means to afford his treatment, but we can’t lose him! We don’t know what to do.”

His parents are at their wits’ end seeing their child suffer so horribly. Shoaib’s brain activity is being constantly monitored using EEG and MRI scans. His parents are still not over the shock of his illness. Despite the odds, they’re determined to do all it takes to save him. But their only problem is the lack of funds.

Mehboob is a farmer who makes a meagre income per month. Within that income, the family practically lives hand to mouth, with only enough funds to spare for the children's studies. Shoaib’s illness has thrown them off balance since they don’t have the kind of money needed for his treatment.

Mehboob and Samina have taken huge loans to pay for his hospital expenses, but the bills have been constantly rising and they’re out of money. In order to save his life, they need your help. Your contribution can give Shoaib a second chance at life.
Estimation letter 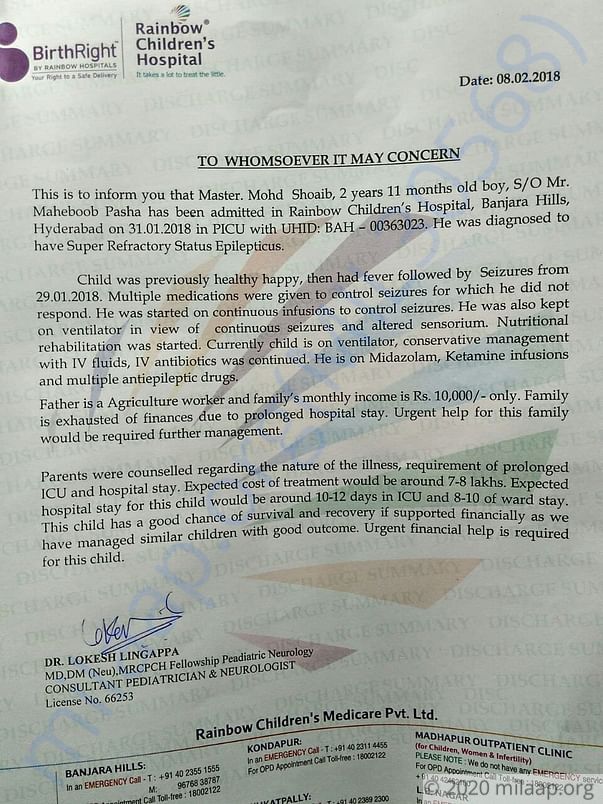 We have some unfortunate and sad news to share with you all. Despite the best efforts, he could not be saved and we lost him.

May his soul rest in peace. All the funds raised have been utilized otwards his medical expenses.

Thank you for all the love and support that you have shown towards Shoaib. His seizures have reduced compared to earlier but are still there. His ear has also swollen as he lies on one side of the bed.

The doctors performed a small procedure and added the CPAP pipe to aid him with the breathing process as he was facing difficulties on the ventilator. But he has developed infections in his lungs and one of his lung has collapsed.

He is still unconscious but is moving his hands and legs a little, sometimes he can move his fingers a bit. The doctors suggest that he is showing improvement and he will take some time to recover completely.

Thank you for the support. Please do pray for his health and speedy recovery. Will keep you posted.

Report fundraiser
See how thousands are crowdfunding for their causes on Milaap
Rs.193,819 raised

We have gone through similar situation for my seizure, fortunately with the grace of GOD financially i was able to manage . I pray for Sohaib recovery.

We have gone through similar situation for my seizure, fortunately with the grace of GOD financially i was able to manage . I pray for Sohaib recovery. 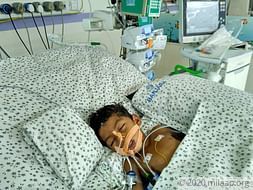