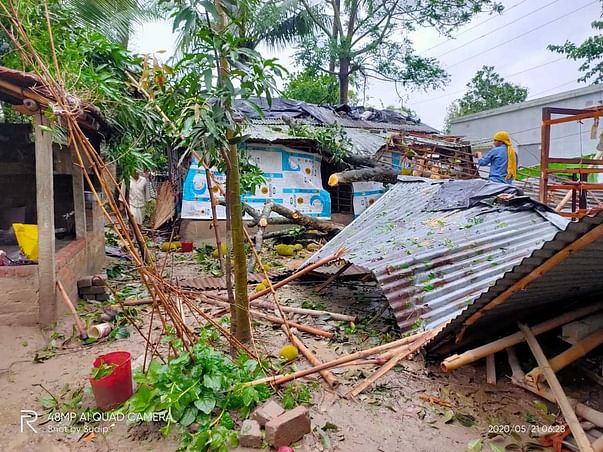 SEWA Bharat is an organization that works with women in the unorganised labour sector. In West Bengal, we mainly work with handloom weaver communities in Nadia and bidi rollers in Murshidabad & Malda.

These are women who are mostly home-based workers. Their means of income is barely enough to sustain themselves and their families on a day to day basis; their financial capacities such as cash savings to tide out such crises are very low.

There are about 120 such families in West Bengal who need immediate assistance. However, the number of affected families may increase as we are in the process of reaching out to all the families. The cyclone has caused monumental damage: there is a lack of viable food resources, damage to tin roofs of houses, broken wooden looms, etc.

How will we help:
1. We will provide relief kits including food packets, medicines, sanitary napkins and other basic necessities.  Per family cost for this relief kit will be approximately Rs. 650

2. We will provide construction services for damaged roofs, window panes, and other infrastructural needs. Approximate costs - Rs. 500 per shed

3. We will facilitate looms repair and other resources required for sustaining livelihoods.
Approximate costs for loom repair - Rs.1000 - Rs.5000

4. We will facilitate linkages to government schemes; our on-ground volunteers and staff will ensure documentation and other necessities.

Till now we have identified immediate need relief kits for 62 people, construction for 35 damaged houses, repairs for 10 damaged looms and 10 loom houses. Details will be updated as received.

The damage caused by Cyclone Amphan in West Bengal has caused widespread loss of life, shelter, livelihood, power, and other basic necessities which will take a long time to restore. While citizen protests are erupting in certain parts of the state demanding quicker restoration, certain low-income communities have been suffering long before the cyclone hit. These communities consist of workers in the informal sector who have always held a severely disadvantaged position in the economy - adding to that the combined effect of the COVID lockdown and the cyclone.

We are constantly connecting with our people on the ground, gathering updates about their needs. SEWA Bharat has provided relief services earlier as well, most recently for Delhi Riot victims and COVID19 affected low-income families. We hope we will have your support through this too.

Who are we:
The Self Employed Women’s Association (SEWA) is a women’s trade union that was started by women workers in Gujarat under the guidance of Smt. Ela Bhatt in 1972. SEWA is now a globally recognized trade union of women workers in the informal economy. In order to secure economic, social, and legal rights for women workers, SEWA supports the formation of member-based organizations of poor working-women. The first such organization was the SEWA Bank, followed by diverse cooperatives and producer groups of women with livelihoods as artisans, milk producers, and farmers. Later on, women formed service co-operatives like those around health and child-care. After over 48 years, SEWA has expanded across the country and has become a multistate movement owned by women in the informal economy. By the end of 2019, there were over 1.7 million SEWA members representing 18 states of India.