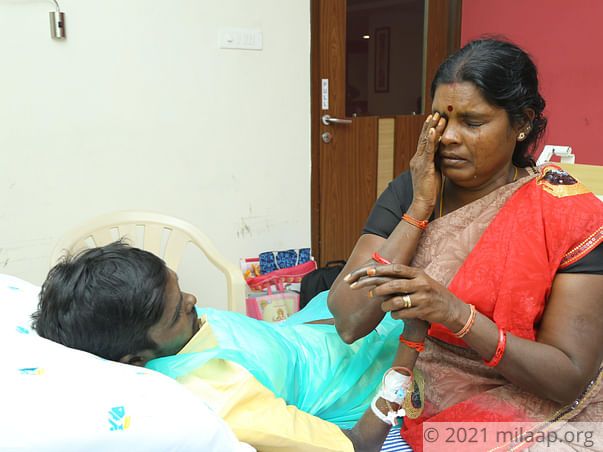 Share
Saran Raj never had a normal childhood. He used to be terrified of his alcoholic father whose drunken screams at the middle of the night woke him up from a peaceful night’s sleep. His mother, Saraswathi, who worked as a domestic help, toiled hard to raise her children all by herself. Frightened and angry, all Saran wanted was to give a better life to his family. But a rare blood disease that has taken over Saran's body completely, has turned everything upside down.

"We didn't know he was sacrificing his health for us"

While Saran was waiting for his final year engineering results, he was already doing a part-time job to support his mother. During this time, he started having intermittent episodes of high fever and cold. He ignored these symptoms thinking they would go away on their own. But things got serious when one day he couldn’t stand up on his own and saw blood in his urine. He went to the hospital with his friend's help. After a series of tests, he was diagnosed with a rare disease called Fanconi anemia.


"For months he didn't tell us anything about his condition fearing that we would stop him from going for work but the pain became too much for him to hide anymore. I had never heard of this disease- the doctors told us that it can even lead to cancer,” - Saraswathi (mother).

Five years have passed since his diagnosis, nothing has changed except that his disease only got worse, despite regular transfusions. His father hardly shows any interest in his treatment. His mother works from dawn to dusk to pay for his transfusions. Now transfusions cannot help him anymore, he needs an urgent bone marrow transplant.


Saran Raj with his family

"He has passed his exams in first class, he studied so hard but all his efforts have gone waste. He has stopped talking to us. He thinks he has become a burden to us. Most of his friends are now in good job, they are married too. They come to visit him sometimes, he keeps asking ,"why me?" but I don't have any answer." - Saraswathi.

Saran Raj with his mother, before the disease took over him

Despite all odds, Saraswathi struggles relentlessly to save her son

Saraswathi works as a domestic help and earns Rs 4000 per month. Saraswathi has put up a brave fight till now but no matter how difficult it gets, she is determined to save her son. The transplant would cost them 25 lakhs, there is no way that she can arrange this huge amount of money without help.

" My daughter is now 27 years, I haven't got her married yet because I don't have anything left with me. My younger son has just started working but still it is not enough. Saran has been through so much of pain and trauma in his life, all I need is to see him live a normal life. Please help me to save my son." - Saraswathi.

Saran Raj had a difficult childhood and a rare blood disease is destroying his youth. His mother, without any support from her alcoholic husband, works day and night for his treatment. Saran Raj's condition is deteriorating every day, blood transfusions are not helping him anymore. He needs a bone marrow transplant which his poor mother cannot afford. She needs your help, your contribution can help this distraught family.