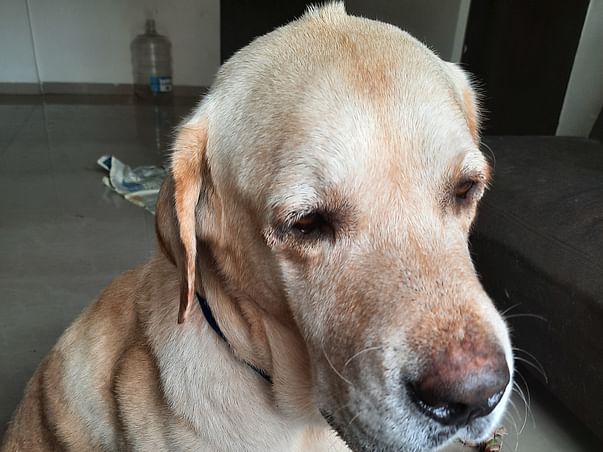 Share
I have been a rescuer since past 3 years and have seen so many Innocent  souls dumped ruthlessly  to die.😔
This lockdown has been terrible and more than us to this innocent kids who are mercilessly  dumped to starve, struggle on the roads for reasons like COVID-19, Illness  or just for the fact that their humans are not able to afford their maintenance.
Is dumping them really  the solution? If you can't  take care of them, there are so many people willing to adopt and shelters who work day and night for these souls, to save them.
Some graphic pictures ahead.
1 month, 4 pedigree breeds abandoned, all critical cases.
**Case 1: ALEX**
June 2nd-
We found Alex, a 7 year old lab boy, late at night 10, roaming  around in the streets, chased by strays, trying to hunt for food in the garbage, hurt, scared and hungry
We immediately  secured him and the next morning  took him to Cessna.
He was diagnosed with tick fever as he had 100s of ticks who covered his complete body, low haemoglobin,  low platelets, hip dysplasia,  arthritis and hit marks all over his body which showed signs of abuse.
His treatment  started immediately  for all the ailments, gradually  he recovered from tick fever, currently  with me, he underwent laser therapy and still going under hydro therapy for his arthritis. Now after a period of 1.5 months, his haemoglobin  has reached  10.1 from 8
He is an extremely  sweet bpy and a well behaved kid.
**Case 2: BLUE (now known as Charlie)**
June 5th-
We found him dumped in Electronic  city phase 1 again. With his left ear badly injured, bleeding and full of maggots, high fever and in extreme  pain and tick fever. We immediately  rushed him to cessna too at he was found around 8p.m. he had to be admitted immediately  and his daily wound dressing  started  after the removal of all the maggots from his ear and treatment  for his tick fever began too
He is 2 year,lab boy, who is extremely  gentle and shy and a friendly  kid.
After getting the treatment  of 1 month he is under our care at our boarding
Poor kid lost his left ear half, but is absolutely  fine now and hail and hearty and that little physical thing of the ear has been embraced and he is an adorable kid.
**Case 3: FERRO**
June 6th-
Just a day after  Blue, a lady found Ferro lying on the road side near the lake and as she couldn't  secure him and didn't  know anything about dogs, we had to go and rescue him immediately.
He was diagnosed  with a huge tumor on his tail which was again infested with maggots and extremely  weak hind legs and bulky weight because of which he couldnt  even stand properly and was dragging himself. Not to forget tick fever and arthritis
He is 9 year old boy
His tumor  had to be surgically removed and the medications  of tick fever had to be started
His laser therapy  showed amazing improvement  in his hind legs and now because of which he is able to walk on his own but has incurred a permanent  damage on his hind limbs
**Case 4: JACK (Dalmatian)
(Bablu as we like to call him)
July-
We found  him lying on the side of the road on a rug. He has a deep maggot wound on the right side of his hip, high fever, tick fever, haemoglobin  5 and plateletes  1.5L with a severe eye infection. We took him to Cessna immediately.  All the maggots were  removed and the wound was dressed and medications  were started. His haemoglobin  wasn't  improving  and he had to undergo a blood transfusion. He is still admitted in the hospital and struggling and improving  every passing day. His infection  has come under control, haemoglobin and platelets have imrpoved too and he is eating now. His maggot wound is better too but since its on his hip..he has difficulty  in walking
Jack has been an incredible fighter. His haemoglobin  levels are constantly  fluctuating every passing day. He is on triple antibiotics, steroids and has recently  been diagnosed  with kidney stones, kidney damage and us on ivs, injections  and steroids


For all the 4 kids we are raising this amount of 2L
Ferro's bills have been 45k
Charlie 27k
Alex 25k
Jack is still under treatment  and the bills ahve already crossed 40k and atleast 25-30k more is expected for his recovery as its a long road
Each of his injections  cost 2.5k, drips, maggot wound, medications, renal diet has put a lot of financial  burden on us and in anyways we don't  want to give up on him and any other kid.


All the kids will be given up for adoption  through proper screening process and those posts will be followed too.