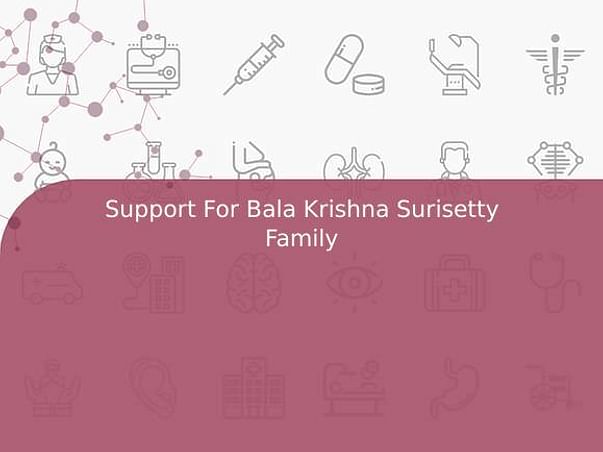 I wanted to reach out and let you know that i'm fundraising this on behalf of my brother (Bala Krishna Surisetty) who is loving, caring and good friend to everyone who he is encountered with.

We are family of 5, me and my twin sister, mother who is a house wife, both father & brother demised. We never reached out anyone seeking for support we are always strong together but the sudden demise of my brother bought a huge loss, caused pain that can never overcome, crumbled us emotionally & finacially.

In 2018 my brother is suffered with normal stomach pain and went for regular check up, found creatine level is shown as 8, which is very high. Then on the advice of doctor's we admitted him in Max cure hospital Hyderabad. They immediately started dialysis through neck area & also biopsy test is conducted for kidney, we found out the sinus fungus closed kidney beds. Later we visited so many hospitals for different doctor's opinion but there is of no use.

After that he was enrolled in Jeevan dhara looking for kidney donor and choosen Yashodha hospital for his treatment which is 10KM away from home and 10km away to office. For two years, weekly 3 times without taking any leave in office he went through dialysis process. During this period the  major nose surgery is done. As the nose bone is grown crossly they had to cut some part the bone. During that time he suffered with lot of pain and also lots of bleeding is happened. Finally we found the donor and kidney operation got success.

Post surgery he suddenly started health problems like heavy cough, plum and creatine level also increased. To maintain the creatine level and save kidney, doctors did steroid injections which cost each one 30,000. We found out that he was infected by donor kidney and then nearly from february 2021 to april 2021 we used to admit him in hospital every alternate week.

During this time, he was affected with COVID and he was adviced to admit in hospital. He has trouble breathing, was given steroids and on ventilator till he demised in June 14,2021.

A donation of any amount would truly help us.