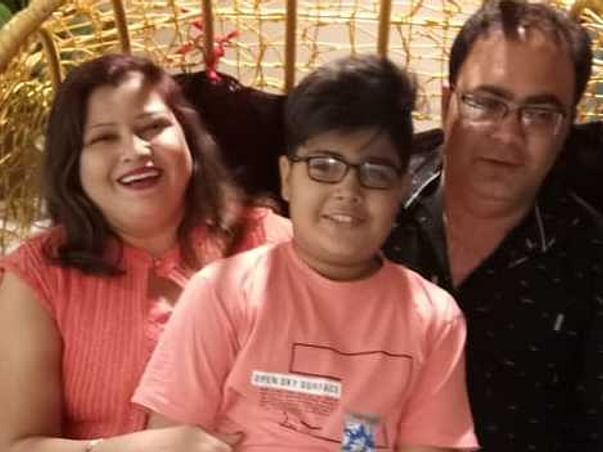 They were living a normal, middle class yet a happy life till a month ago. They had financial crisis but still Kamlesh managed to fulfill all his family needs in the best way that he could.

Kamlesh himself was a heart and diabetes patient and earlier had his heart operation done. He was bearing his medical expenses and also his mother's medical expenses who is on a wheelchair. Also, they lived in a flat and were paying installments against their home loan and ownership of the house was yet to be transferred to them.

Everything was going really well in their lives but life got some other plans and in a span of night, their lives went upside down as the sole earning member and the pillar of their lives was gone.

Kamlesh was diagnosed with covid-19 on 24th of May. His health and oxygen levels were normal for the initial two days except that he lost his smell and taste. On night of 26th may, he started struggling with low oxygen levels. From 2:00 am in the night, his health started deteriorating. Roshni's brothers came with an oxygen cylinder so that they could provide him oxygen and take him to a hospital asap. Till he was taking oxygen from the oxygen cylinder, Roshni's brother took him to the hospital in their personal vehicle as during that time, there was waiting for ambulances for next 72 hours and also the rule in Gujarat prevailed till 27th May that hospital beds won't be provided to covid patients until brought in an ambulance. They went to several hospitals, wandering here and there to seek a hospital bed for Kamlesh but were denied as he was not brought in an ambulance. Kamlesh struggled with his breathing and took his breaths in such a pace that the oxygen cylinder which was about to provide him oxygen for next 2 hrs was consumed within half an hour. And he succumbed to his illness. He was just 40 years of age.

Kamlesh was survived by his mother, Wife and son.

This fundraiser is aimed at supporting the family, partly helping in creating a balance for the medical costs, home loan installments and Varun's future.

They don't have the ownership of their flat yet and also they have many expenses to bear such as Varun's education fees, Kamlesh's mother medical expenses as she is diabetic patient and is on a wheelchair. Roshni herself was a housewife with less education and now she altogether has to stand on her own. As she will be starting a new life where she will have to earn all by herself, its hard for her in starting itself to raise such an amount which can satisfy all their daily needs, medical expenses, educational expenses of her son and installments of their home. Also, Roshni's family is facing financial crunch and hence can provide limited support to her.

This is a devastating time and obviously, there is nothing that can alleviate the pain arising out of the tragic loss.

However, a small gesture of kindness can go a long way to minimize the grief and shock which they are currently undergoing.

Please help Kamlesh’s family get a semblance of financial aid during these difficult times. We need your wholehearted support, whether little or large, in this quest of trying to stabilize a future for them.