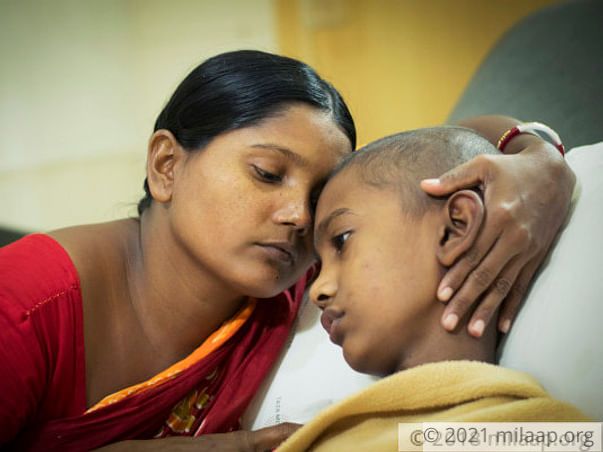 “It’s difficult to keep convincing my 10-year-old that he will not die. He wakes up every night crying to himself and murmuring that ‘I know I won’t live’. He keeps telling me that he can’t take the pain of injections anymore. He tells me that his entire body burns when he undergoes chemotherapy. He has stopped eating as well. I wish I could just take him away from all the pain. But his sufferings don’t seem to end,” Ulsuma, Raju’s mother.

Despite a life-saving surgery, Raju's cancer continued to be fatal for him

Apart from having bronchitis at the age of 5, Raju never really suffered from an ailment. Munab and Ulsuma had guarded their only son with their life until last year. The first alarm rang when last year he became unconscious twice in school. A few days later, Raju started puking a lot and his body was burning with fever.

"After knocking the doors in several hospitals, we were finally told that our child has a brain tumor. We had hopes when the doctors told us that the tumor that had grown near his neck could be removed with a surgery. But the biopsy report after his surgery shook us. This wasn’t an ordinary tumor, but a cancerous one.”

Since last September, Raju has been suffering from medulloblastoma, a cancerous brain tumor. The little boy has already undergone 28 radiotherapies and 8 cycles of chemotherapy. His body has become very weak now and the 10-year-old feels he won’t live long.

“I am not allowed in the hospital room for the entire day. Whenever I am around Raju, I try to tell him that he is going to get better. I tell him that we are fighting for his treatment. Nothing seems to bring him at ease. We try to keep him happy as much as possible.”

Raju has a shunt fit from his brain to his feet that will prevent accumulation of water in his brain. This shunt, which is similar to a pipe, should stay in his body as long as he lives. When his tumor was operated, the doctors removed almost 2 liters of fluid from his brain. While we thought this pipe could cure him, right now without chemotherapy for at least another 3 months, all the treatment done so far will go in vain.

“I work as a mason in Shaktigarh, West Bengal. I somehow manage to earn Rs 100 per day. With monsoons setting in, there is a little scope of getting work these days. I can go to the hospital in Kolkata only when my child undergoes chemotherapy. On other days, if I don’t work I will not even be able to afford the basic food expense of my family,” Munab, Raju’s father.

Even after selling off everything, Ulsuma is not ready to let cancer snatch her son away

Ulsuma has stayed by her son at every moment when Raju kept crying begging to let him die so that he doesn’t have to endure so much pain. She has tried to keep her smiling in the toughest moments. Not only her gold and silver jewelry, Ulsuma has also sold the TV, refrigerator and everything else that could be sold just to save her son.

“We have already spent almost Rs 5 lakhs. We have occasionally been turned when we tried asking for help. Whatever we had, everything is gone. We don’t have anything else apart from hope. The only thing that I know is that we can’t give up on Raju. He has already lost hope in life, I have to save him at any cost."

10-year-old Raju is suffering from medulloblastoma for one year. Even after struggling for a year, without chemotherapy he won’t make it. The cost required to save him is Rs 4 lakhs and the parents can’t afford to save him.