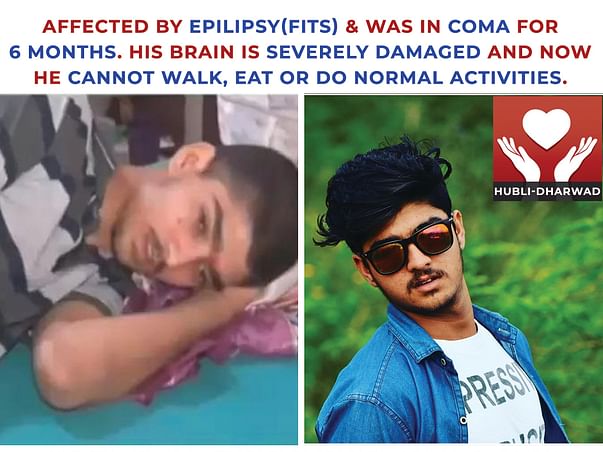 Share
This is a Fundraiser for a poor old mother seeking our help to fend for her 19-year-old son Vinayak's medicine & nourishment needs who was affected by Major EPILEPSY (FITS) last year and has been in COMA for the last 5 Months. But as he tried to fight his way out of COMA, it was late, and his brain was majorly damaged and he had lost all his basic memory and Neuro-motor skills, as a result of which he can no longer speak, eat properly, walk and think. The most tragic part is he doesn't even remember his mother. He is undergoing treatment at SDM College of Medical Sciences and Hospital.

"No one has ever become poor by giving." –Anne Frank

"It is more rewarding to watch money change the world than to watch it accumulate." –Gloria Steinem

Background:
This is an unfortunate, tragic story of an underprivileged and helpless mother who is now deprived of the very hope and dream of her life- her son. Her husband, a hardworking man, served as a security guard, a driver, and carried out other day jobs to earn a livelihood and take care of his wife, Son & little Daughter. But he soon got bedridden due to Diabetes and other ailments. They say, with great poverty, come greater struggles! Standing strong, she worked hard every hour of her life, by selling pickles to papad, to doing chores in households, walking 8-10 Kilometres every day to save each penny and to earn a daily living. The only ray of hope was her son, who had a promising future.
He was a graduate student also earning while learning to support the family. But an unfortunate event that took place in the premises of Lord Kukke Subramanya while he sought strength, changed his life adding more misery to this family. He had his first Epilepsy attack and he fell unconscious on the ground. With no hospital for around 60 km nearby and delayed medical attention, he experienced multiple Seizures attacks and went into COMA. He now can barely talk, let alone going back to pursuing his studies. The family is having the hardest of the times with only a ray of hope that one day their son will recover. Kindly save this poor life with your generous donations and be a part of bringing back a smile on a mother’s face!