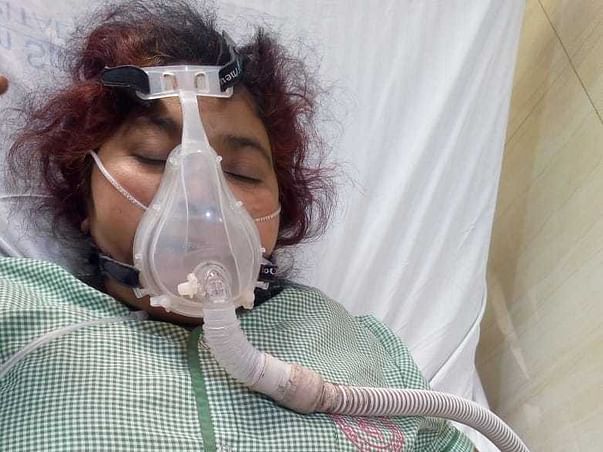 On the morning of February 2nd, Radha was about to go for her work, suddenly she felt difficulty in breathing and after some time she collapsed on the floor. Her husband Srinivas rushed to her and tried to recover her consciousness, but in vain. He called his son and then they rushed to a nearby medical clinic.
On examination, the doctor referred her to the hospital, where she was admitted immediately. Firstly the doctors told that the symptoms are of Swine Flu and they treated accordingly. Despite the treatment, the condition of Radha got deteriorated and doctors told the family that there is no hope and they forcefully discharged her. Now, her family had no option left except to bring her to Delhi. But, on seeing her condition government hospitals refused to admit her despite the pleas of the family. Then family admitted her in a private hospital where she is in ICU till now. On diagnosis, it was discovered that her lungs got infected and her one lung is completed damaged and another is infected. Doctors have told for lungs transplant immediately which is estimated to be somewhere Rs 25 lakhs.
Radha works as domestic help and her husband Srinivas is a carpenter. Whereas her two sons are working as daily wager while her third son is studying. Their family hardly earns enough to support their daily needs. They have already spent Rs 1.5 lakhs which they have borrowed on high interest. They won’t be able to save Radha without your support. Radha needs our help.