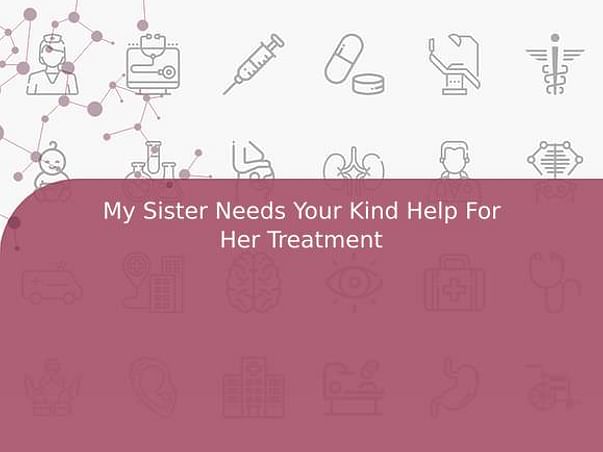 My father was diagnosed with Parkinson's in 2011, and in October 2018 he had to go through a very complex brain surgery known as the Deep Brain Stimulation, due to which we lost all our savings. His treatment duration was from October 2018 - January 2019. The same year my sister was to complete 1st year of her graduation in May until she was diagnosed with Multi Drug Resistant Tuberculosis on 26th April, 2019. The treatment began with 4 months of daily injections and 15 tablets per day. She had to leave college at Panjab University, in Chandigarh & come back home because her symptoms were very severe. In October 2019, it was the first time she coughed blood & we came to know that the right side of her lungs was heavily infected from the disease that had formed cavities on the lungs. Without delay I sought the best treatment for the disease & brought her to NITB hospital, New Delhi. As the tests for tuberculosis have a very long duration after which the medications is decided such as culture which takes 60-90 days to provide us with a report. On December she was put on a new treatment with another 2 months of daily treatment. The weight loss was severe in 4 months she had lost 12 Kgs & in another 4 she lost 10 Kgs. In December she was weighing only 31 Kgs. Her injections were scheduled till 29th Feb, 2020 from 29th December, 2019. She was admitted in December in the same hospital for certain tests. She had already stopped standing on her feet by the end of November.
The treatment was going good until February and she had started to walk herself to the washroom after the new treatment started from December. On 15th March, at around midnight she lost her natural breathing & we spent the night using nebulizer to help her breathe. Next morning, I rushed to the hospital & started giving her oxygen via oxygen cylinder at home. They did not provide me more than of 10 days oxygen therefore I had to buy an oxygen concentrator for home which cost me ₹ 70,000. We referred to the nearest zonal hospital for treatment as reaching Delhi in this condition could not have been possible. We did the X-ray & came to know that her lungs have suffered a Bilateral damage. 60-70% lungs have been permanently damaged. The treatment at our hometown was not helping. On 16th April, I decided to travel to Delhi in the middle of the pandemic by seeking a special permission from the District Magistrate & admitted her here in Delhi. We are currently here, in the middle of the pandemic, with little funds left with me. Her treatment will last for another year or more. Her samples have been submitted but it'll take 42 days for the report. The doctor has told us her survival is only possible if she survives this phase. Only after the report comes, they can start her on a new & better treatment after they see the results from the liquid culture.
Initially she was admitted in a ward which was very small (a single bed, a stool that's all). My mother is also a patient of thyroid, diabetes, high blood pressure & migraine with also a history of severe depression. She was not getting sleep there & the humidity, warm weather created more problem in breathing for my sister even though she was supported externally with oxygen. She was being more depressed in that cabin like room. This time her weight was at 22 Kgs only. She wasn't eating at all. Imagine her feelings being stuck at home for a year with nowhere to go and being told that she'll have to remain home for another year. A 19 year old with daily injections & more than 10 tablets a day where she can't even move a little bit or it'll induce endless coughing which shall hurt her chest and burn it from inside. We see people complaining of boredom in this one month of lockdown & this is what our life is for the past year & will be for the next. Hence I had to seek a private ward room where she could breath easily, paint, draw and read in peace, where my mother could have a sound sleep so that her health does not worsen. They charge INR 2100/ day for this double sharing room. They charge a security deposit of 10 days advance which gets refunded after she'll be discharged. I've spent around ₹ 60-70 K here till now Including room rent, food & medical expenses.

Recently we had to sell our vehicle too because the treatment expenses of my father, sister & grandmother (diagnosed with breast cancer) had created a huge debt on us in the medical store where we purchased our medicines from, and also to return the money we had borrowed from people for my father's surgery. We had to take a loan for which INR 11,000 is deducted every month from our account. I am in my final year graduation and could not do anything. I could not study for the past year because of my family's health condition.

These funds will be used for creating an environment for her where she regains her lost confidence and faith and sees a motive to give this treatment another try.
This treatment will require several visits to Delhi from our hometown where the Cab charges around INR 17-18 for a round trip. She cannot travel in a AC Volvo bus because of the respiratory problem & not in an ordinary bus because of severe body pains. Her back does not straighten due to severe muscle wastage.
Currently she is on 3-4 injections daily for vitamins, strength and antibiotics. One of these is a steroid. These injections are to be continued for another 5-6 months. These funds will be used for these medications which need to be purchased.

It's a everyday battle with lots of pain & struggle for a normal life she is wishing to live. These funds will help us fight this war for defeating tuberculosis and give her the strength to start a new life. Please help my sister, please save her.

We are very desperate to see her walk & laugh again. Its really been a long time.