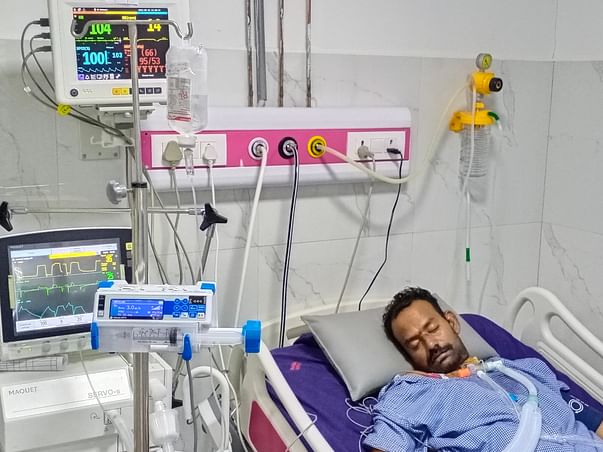 Ponugoti Prashanth Rao belongs to Rangareddy district and he has two children's one is two years girl and 20 days boy. He belongs to poor family. Prashanth Rao was admitted in TIMS Gachibowli with Covid19 on 14th May21. After one week he shifted to ICU in emergency condition. Later he shifted to Ozone Hospitals and kept on ventilator as his both lungs were 100% infected. In ozone hospital he spent almost 20 lakes for 15 days. Still his condition is not improved. Doctors informed as he may required long time to recover from lung infection If we keep in big hospitals ICU he may infected with secondary infections which will impact on recovery percentage, so suggested to shift him to any other isolated hospital to avoid secondary infections. Now Ponugoti Prashanth Rao is In Pragma Hospital ICU under doctors observation. Now he is paying 80,000/- expenses including medicine, investigations and hospital service charges. But present situations is very bad he and his family does not have money to save him . Already he paid almost 20,00,000/- since he joined in Ozone.. Don't know still how many days it takes to lung recovery. Requesting everyone to support Ponugoti Prashanth Rao and save his life with your valuable contribution.