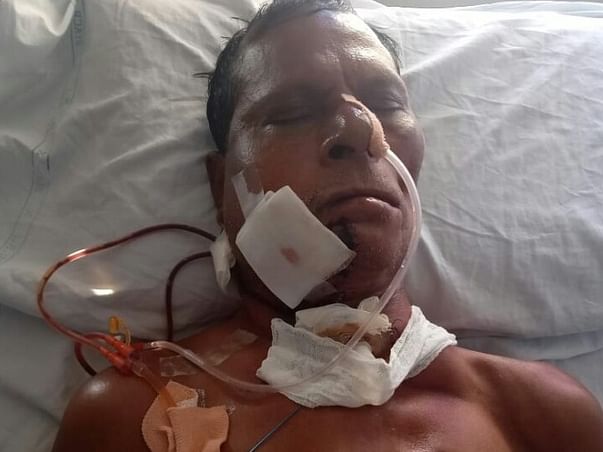 Sir,
This is   Sudhakar Pogiri  I am working as a camera person with a Telugu news channel  AP24x7 in  Vijayawada in Andhra Pradesh.    Unfortunately, my father Pogiri Appala Naidu aged 65 years old has been suffering from Jaw cancer.  Earlier,  my father already suffered from Jaw cancer and surgery was done. But after 4 years the same horrible disease again now attacked the old man, who has been not able to bear.
As there are no proper medical facilities in Vijayawada regarding the cancer treatment, with the recommendation of local doctors we visited Basavatarakam Cancer Institue, Hyderabad. The Doctors of Basavatarakam Cancer Institute say that there must be another surgery has to be done with an estimated cost of Rs 4 lakhs.

As I am a small private employ, financially it's a very difficult task for me. As we are under below the poverty line we also having Arogyasri (government insurance facility), but Hospital management said that  Arogyasri is not accepted for this major cancer surgery.

I spent around Rs 50000  so far for preliminary tests and diagnosis with the support of debts from friends and relatives. Adding to this, our News channel (AP 24x7) has been stopped with the financial crisis and not yet paid 4 months of salary to the employees. As I am also one of them, troubles surrounded me were doubled.

Doctors of Basavatarakam Cancer Institute asked to admit my father in the hospital for the surgery on Monday that is on December 7 and said to pay entire operation charges of Rs 4 lakhs at the time of admission. As a son, I have been protecting him to the best of my ability.

We came to know that you are supporting the poor with a kind-hearted. Hence I request you on behalf of my family to save my father supporting financially for his surgery.