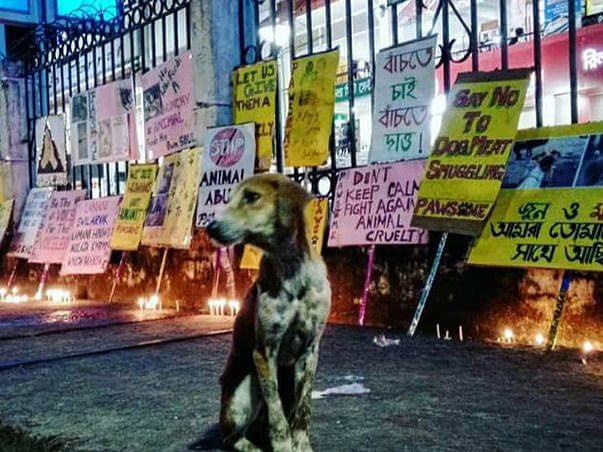 Hi! my name is Partha Deb and I live in India. And in India “In Hindu culture, we are taught that the same soul that is in a human being is the same in all animals. It is also an animate thing, so we have to treat everything equally. Thus we have to treat all the animals with grave respect,” explains Geeta Seshamani, 65
But in reality humans barely have time to help each other so, helping homeless animals is a fantasy and in India it's a joke. Well it was a joke to me, yeah until that day when I killed a stray dog. Well I was going to my college but I was getting late so I took a shortcut. As I was walking I found a stray dog following every pedestrian on the road. And in a few moment he(dog) started following me and when I took a close look I saw that he was in a horrible condition. He was so skinny that I could see his bones, so weak, he was very young a teen dog maybe. He gave me a look like if he was begging me for help. But but but I was getting late so I just left him. After walking some distance I looked back and he was still sitting there, still looking at me, not following anyone anymore, just looking at me. And then I started walking and didn't turned back. I felt bad but I was getting late. Next day on my way to college again took that shortcut just to see that dog. And I found him, Yeah I found him, I found his dead body on the side of the same point of that road where I left him. There were flies all over his body. I was, I don't know it broke me. I felt like I killed him. I couldn't sleep that day. He was dead because of my selfishness. If I had helped him. That day I decided to help homeless animals but as I said in India specially where I live it's a joke. First I started on my own then my friends joined me, we formed a small animal rescue team. Here is a video of our recent rescue of two cat cubs thrown away to die by us(humans), shame on us! (they are safe now)
But soon we were low on funds. We asked people for help, many refused, few laughed, few helped but wasn't enough. We also went to meet the Government officials but they are busy people(you know what I mean). So, here I am, asking for help. If you can then please help me to make an NGO for those poor, helpless souls and if you can't then atleast share this post. I am doing this for that dog, you do it for yourself.
Here is another video. Rescue of a young dog, his front right leg was broken. Don't know who did this. But he's safe now, under treatment and will recover soon.
Our Mission
i.To Provide Healthy Foods to Street Dogs on daily basis.
ii.To provide on Site First Aid Facility.
iii.To Sterilize male & Female dogs by registered veterinary doctors.
iv.To provide extra care for new born street puppies.
v.To Provide Free Anti Rabies Vaccination for street dogs as well as for Domestic dogs through various campaigns.
Vi.To lease/rent a good shelter for Street Dogs & abandon Dogs.
Vii.Try to give new home to abandoned dogs & pups.
Viii.To protest against Dog abuse and to stop unethical Dog breeding.