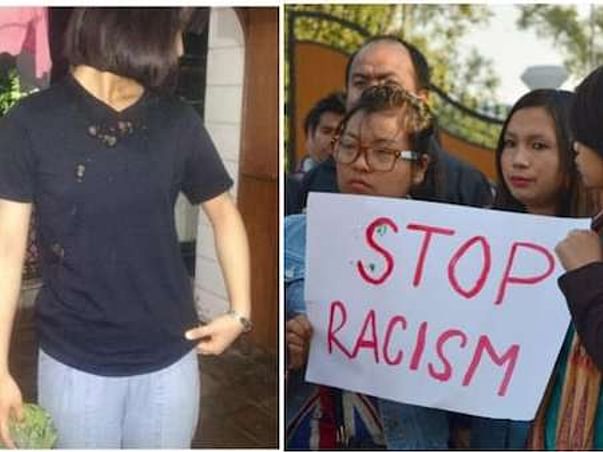 A Northeast girl have been brutally assaulted, abused, raped in jodhpur due to which she committed suicide. The pain, the torment and the physical torture she had experienced is what many Nirbhayas had faced before. Even during a pandemic, some humans have lost their humanity and the cases of rape, gangrape, molestation and violence against northeast people has been rising.

Ever since the first case of coronavirus was reported at the end of January in India, instances of race-based discriminations on the Northeast Indians began to surface in different cities of mainland India from month of February. Spatially, these incidents had occurred in the four corners of the country. The following incidents were ‘self-reported cases of racism during the coronavirus pandemic in India.

On 10 February a woman from Nagaland was visiting a friend at Chembur in Mumbai, who is a student at Tata Institute of Social Sciences. Wearing a black mask and traveling straight from the airport, she was confronted by a resident of the building while taking a video of the confrontation. Suspected to be Chinese and carrying coronavirus, she was considered a threat to the surrounding.18 When she was not allowed to enter the building, an acquaintance in another locality of the city had to accommodate her.

On 6 March an undergraduate student of Delhi University from the Northeast went to a shop in Kamla Nagar to repair her spectacles. Two men threw water balloons at her and called her “coronavirus”.’ She was reported to be in tears after the racial attack. In another similar incident at Vijay Nagar in Delhi, an MPhil student of Delhi University hailing from Manipur, went out to shop grocery items after the Janata Curfew that was announced by the Indian Prime Minister on 22 March 2020 was over at 9pm. A man called her ‘corona’ and spat on her body with the betel nut that the accused chew and escaped with a scooter.19 The 40 years old man was later identified with CCTV footage by the police and arrested.

In Ahmedabad Northeast girls from Nagaland were accused of spreading coronavirus and were asked to vacate their rented apartment despite the rent being paid in advance for the month of March. In another similar case in Kolkata, a student from North Bengal was told by her landlord to vacate her rented accommodation because he suspected her to be a carrier of coronavirus. On 28 March two Northeast students from Nagaland were not allowed to enter a grocery store in Mysore. Even after showing their aadhaar card the security denied them to be Indians.21 A journalist tweeted on 29 March about the action taken by Karnataka Police: ‘This happens in Mysore. FIR lodged in Krishnaraja PS. The manager and staff of the outlet have been taken to custody. We urged people & shop owners/staff to desist from doing such acts & behave responsibly in this time of crisis.’

On 6 April afternoon, a Manipuri girl was deliberately spat on her shirt by a biker in Mumbai with the betel nut he was chewing and sped away.22 Sharing the social media picture of the incident the National Commission for Women posted in its official Facebook page: ‘Yet another case of racial discrimination amid #Covid19Outbreak, a miscreant spat on a Northeastern girl today in Kalina Market area in Mumbai. NCW will look into this matter for appropriate action.’ The girl was on her way to collect groceries distributed for Northeast people. Mumbai Police tweeted on 18 April that the accused was identified and arrested after ‘video analytics, analysis of mobile data and other such information’ were done.

On 7 April a nurse in Siliguri was not allowed to enter her rented accommodation by the landlord and neighbors in the locality because of her profession and racial appearance, assuming that she might carry coronavirus. Addressing her as ‘coronadi’, people gathered to stop her from entering her rented accommodation at Matigara community development block of Siliguri in North Bengal.

On 8 April two youths from Manipur’s Senapati and Chandel districts were not allowed to enter Star Market in Hyderabad despite both of them attempting to show their aadhaar card. The two youths pleaded to the security that they reside near the store and they are not infected with the coronavirus. In the 3-min video clip that was shared on social media taken by one of them, the videographer said: ‘These people didn’t allow us to enter the mall to buy some groceries because our face looks different.’ The Facebook post by Hau-Initiatives North-East captioned with what one of the victims said: ‘This two security denied that we are Indian. This is totally prejudiced. Instead of fighting Covid-19, we are still fighting racism. Why do we people of Northeast India need to prove that we are Indian even though we are also a part of India.’ The engineering student from Chandel said: ‘It is very humiliating when someone call us foreigners when we are born Indian citizens. We explained to them that we are Indians, showed them our aaadhar card and identity card but they refused to recognize it. But stopping people from buying food just because of our looks is a crime against humanity.’23 The official Twitter account of Rachakonda Police tweeted on 9 April that an FIR has been registered ‘against store manager & 2 guards of StarMarket at Vansthalipuram PS. Accused are in custody, Regretted Incident. Police will not tolerate such an act. In case of any problem dial 100.’

On 14 April two Manipuri youths were called ‘Chinese’, ‘Chinki’, ‘Corona’ in front of police personnel at Mahipalpur in South Delhi whom the two youths called the police after they face discrimination during their grocery shopping. Later on, they called Northeast Helpline number and the three SPUNER police held the accused who had poured water over them. In another incident in Bangalore, three youths from Manipur went grocery shopping on 20 April. Two policemen tried to disperse the crowd asking them not to gather and maintain social distancing. The victim who reported the incident in his Facebook post claimed that the policemen never hit local people who gathered there but once they saw our face they hit us. He questioned: ‘There are so many people gathering and walking in this street why only us? Why hit people only after seeing their face, isn’t that racist?’ The National Commission for Women also took cognizance of another social media post on 24 April, ‘wherein few northeast girls were brutally attacked, abused by a lady & her daughters living at Porvorim, Goa.’ It was alleged that ‘local police did not file any complaints,’ but ‘instead threatened them to refrain from registering any complaint.’ The Commission directed Goa Police ‘for immediate inquiry’ and to take action ‘against the accused of the crime, and to take necessary steps for providing security to the girls.’ One of the comments on this post alleged that a male was warning other northeast girls not to come near them.

These were the few cases of self-reported overt acts of racial discrimination during the pandemic that surfaced in social media as well as in print and visual media such as newspapers and television channels. There will be many more victims during this pandemic, and many incidents of racism may not be reported as the victims did not want to protest or lodge a formal complaint with the law enforcement agencies.

The question that arises is the mentality of the culprits that did this heinous crime can be changed or the criminals can be rehabilitated as per the theory that is followed by the CJS??

Answer is No! They should be punished immediately after being arrested. But we all knew that it will be a long judicial process of fostering criminals and taking care of them in jails for uncertain years.

But its high time and now the citizen of India will not stop till the culprits who discriminate against people based upon their looks are punished.

We as a citizen of India are fed up with the Criminal Justice System who doesn't provide justice to victims rather than foster criminals in jails till the trial completes.
As we can witness these don't have any effect to the criminals or there is any decrease of cases, therefore there should be new amendments in the law that provide fast judicial trial and immediate execution in cases of racial discrimination.

We as a citizen of the democratic country demands Stringent Law to punish the culprits and provide justice to victims by fast and efficient judicial process for the crime which has substantial conclusive evidence.

Here, I would also like to shed some light on how the Judicial system can implement laws to curb the racismDuring the Covid-19 pandemic, Northeast Indians in different parts of mainland Indian cities were racially profiled and negatively stereotyped as the ‘face of coronavirus’. Such profiling led to a spate of racial abuse and discrimination. Narratives of such incidents show that the victims desperately assert their Indianness in the face of such racial abuse and discrimination. The coronavirus racism reveals the persistence of the racial fault line and the nonrecognition of Northeasterners as equal Indians. If racial profiling is not timely and adequately addressed it can, ‘reinforces the “us-versus-them” mentality,’ as shown in others studies, and may once again bring back the sense of alienation that the Northeast Indians were once subjected to and further exacerbate it. This will impede the Nehruvian dream of ‘unity in diversity in the long run, when the Northeast Indians willingly identify themselves as Indians after decades of alienation.

The persistence of racism sent a strong message that the current legal framework is inadequate to ward off overt acts of racial discrimination and necessitates a strong anti-racism law for stronger national integration. Apart from the introduction of a strong anti-racism law, the future will depend much on the responsiveness of the law-enforcing agencies and the effectiveness of the criminal justice system related to racism. As indicated in many studies, overt acts of racism are just the tip of an iceberg which, as in India too, the other levels of racism are hidden or are much more complex to deal with. Given the nature of prevalence of casteism, which marginal groups equate to racism, and the hierarchization of societies in India, addressing this social problem is just the beginning of a long struggle for an equal and just society. As for now, how ordinary Northeast Indians cope with these extraordinary circumstances along with racial discrimination will remain in the minds of the victims for long even after the viral pandemic is gone. The scars of racial discrimination will linger in their memories.

Action Against Violence is a national-level registered non-profit organization to end violence in society. Nearly 1lakh people have supported and signed the petition to be filed in the court and provide justice to northeast people. the amount raised in the campaign will be used to fund cases of victims who have faced racial discrimination. Further, the fund will be used to file a petition in supreme to enact an Anti-racism law to End violence against Northeast people. Action Against Violence will also file various memorandums with the Ministry of Education formerly - Ministry of Human Resource Development  (1985-2020) to implement interstate cultural exchange program and northeast culture syllabus in school and colleges.

We demand justice for all victims who have faced racial discrimination and the introduction of northeast culture in school and college education syllabus.

Donate
1 supporter
1%
Raised
Rs.101
of Rs.20,00,000
Only INR donations accepted towards this cause
Card, Netbanking, Cheque pickups
Or Donate using