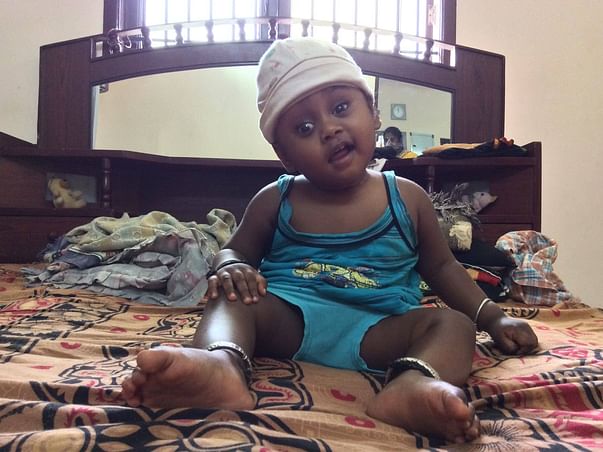 Share
At only 11 months, Baby Nidarshan fell down and had a grave head injury. His parents admitted him in a hospital and got the operation that the doctors asked for. Now he needs another surgery to replace his skull and drain more fluid from his head. His father, a ticket booker in a small travel agency needs help saving his son.
Nidarshan with his mother
The fall that changed everything
Nidarshan had just started calling his parents amma (mother)and appa (father) when his life took an unpleasant turn. He was learning to stand up and walk. An adventurous child, he tried to walk upright on stairs that proved too much for him.
He fell on his head and his delicate, soft infant skull cracked at the impact. He started crying and fainted. His parents rushed him to the hospital. The doctors said his head was swollen because of internal bleeding. Immediate surgery was performed to ease the pressure. The doctors removed a part of his skull and bandaged his head.
For the last six months, the dressing on his head is changed twice a month, but the swelling has come back. “The doctors have said that Nidarshan needs urgent surgery because of the pressure. Even the smallest impact will directly hit his brain hard,” he says. The swelling is beginning to affect his growing face and even his eyes. If untreated, the brain damage will be too severe to reverse.
A parent's worst fear
Taking his baby to the hospital was the most scared Vijaykumar has been. Revathi  fainted when she heard that this one fall could injure her baby's brain permanently. Vijaykumar asked for help from every one and raised the Rs 5.5 lakhs needed for Nidarshan's surgery in over three weeks.
With a monthly income of Rs 8,000, there were times that Vijaykumar doubted that he could raise the amount in time. After borrowing from every one, he had no recourse but to borrow from the local moneylender at 2 and 3 percent. Now saddled with debt, he is unable to raise any more money.
The prospect of not having money to treat their baby is breaking Vijaykumar and Revathi's hearts. In their time of despair, they need help raising funds togive Nidarshan the operation he needs to grow into a healthy child. Donate now.
Supporting document:

Donate
0%
Be the first one to donate
Need $2,000
Card, Netbanking, Cheque pickups
Or Donate using