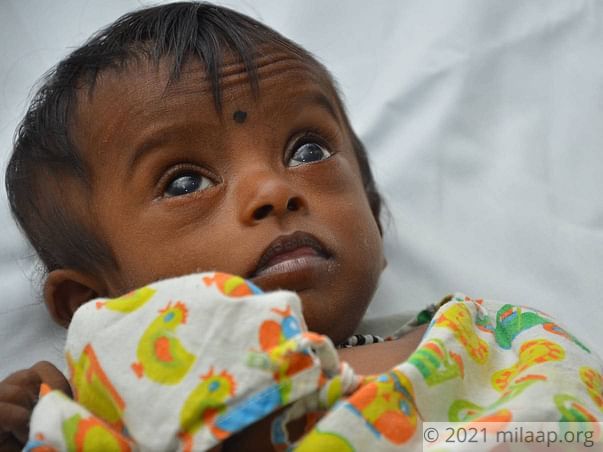 “I was holding Baby Muvitha in my arms when the doctor informed us about her heart condition. My hands started shivering looking at her innocent face. I remember asking him repeatedly - Will I lose her? How much has she left? ” –Ram Kumar, father.

Ever since their baby girl was diagnosed with a severe heart disease, Ram Kumar and his wife, Panchali have been living in constant worry. “When she starts gasping for air and turns dangerously blue in the blink of an eye, I can feel my own heart pounding. I track every movement, every expression, every cry,” says Panchali. The only relief for these parents is the fact that a surgery can make their child better, but in Ram Kumar’s own words, “I feel very guilty for delaying her surgery for so long, but we wouldn’t have done so if we had some way, any way of arranging money. Being poor, we can only beg for help.”

“She is 4 months old, but looks like a newborn who is not growing”

Panchali discovered that there was something wrong with her newborn baby on the first day of her birth itself when she had started breastfeeding. “She could not drink properly at all and would make whimpering noises while suckling,” she says. As days passed, she also found that the baby was hardly active, and was not growing at all. She looked just like she did the day she was born. A trip to the doctor and a thorough check-up later, it was confirmed that their little angel had a heart problem.

Muvitha was diagnosed with complete atrioventricular canal defect, a congenital heart disease in which there is a large hole in the tissue that separates the left and right sides of the heart. As a result of the abnormal passage between the 2 sides of the heart, blood from both sides mixes, and too much blood circulates back to the lungs before it travels through the body. This means the heart works harder than it should have to, and will become enlarged and damaged if she does not undergo surgery soon.

This poor father is forced to stay away from family for work, is struggling without avail

Ram Kumar works as a daily wager in a farm near Kodaikanal, while his family stays in Theni, Tamil Nadu. He had to leave his hometown for Kodaikanal in order to find work that pays better, after he came to know of his baby girl’s illness. Now, he despite working all day and night, he is able to earn only Rs 350 a day, which is hardly enough to travel back home every week. The baby’s surgery costs a whopping Rs 4 lakh, which is completely out of his reach. He is now full of guilt, as he thinks he has failed as a father.

Baby Muvitha cries herself to sleep due to the discomfort and breathing problems she is facing as a result of her bad heart. She is her parents’ only child, and they want to save her at any cost, but poverty does not allow them to.